Event Highlights: Europe in the Age of Popular Nationalism, a Lecture by Erik Jones 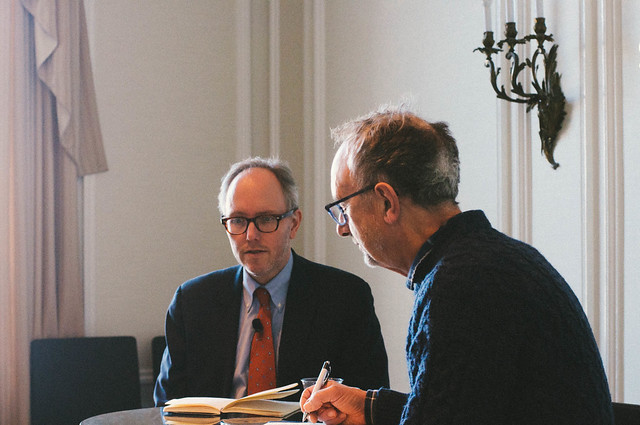 Jones started by saying, “What is going on right now in Europe is pretty alarming. You feel an acceleration of events.” He then continued with a discussion on the current hopeless outlook for the European project and the growing force of nationalism around all of Europe. After offering an analysis of the Brexit decision, Jones cited three key features of current European integration: 1) European integration does not go in just one direction, but instead is bidirectional; 2) Sovereignty is unconstrained in Europe; 3) Nationalism is popular.

Erik Jones elaborated on this wave of nationalism across many countries by describing the shifts in perspective in the UK and then his personal experience in Italy, the place he now refers to as home. He explained that as nationalistic inclinations rise across the EU, confidence in the European project continually decreases. Popular nationalism gives individual countries a reason to promote national sovereignty and independence from EU institutions. For Europeanists, creating an integrated vision that can be spread across the EU is a complicated and difficult process as nationalism remains a strong undercurrent in the public dialogue.

Boston University Professor of Political Science, Graham Wilson (Director of Initiative on Cities at BU), began the second session by proclaiming, “my practice is usually not to wear my politics on my sleeve… but I have to start by saying I believe that Brexit is an unmitigated disaster for the United Kingdom.” Prof. Wilson briefly explained his qualms about David Cameron’s leadership in the U.K. leading up to the British vote to leave the EU, and eloquently stated that evidence exists demonstrating Cameron’s underestimation of both the public opinion and political environment leading up to Brexit, explaining how it was “not a happy story in Britain.” Moving away from the specific topic of upcoming Brexit-related decisions facing the U.K. and the EU, Prof. Wilson argued that there is an emerging trend towards nationalism for one’s home country rather than toward a Europeanized vision for the future.

Prof. Wilson then discussed how Brexit can potentially be seen as a reason why other countries would actually not want to leave the EU. He explained the positive interpretation of Brexit, arguing that countries may benefit from the lack of British influence and instead prosper from the opportunities made available under the conditions of a U.K. withdrawal from the EU. Graham Wilson and Erik Jones ended their conversation by noting the importance of continuing the discussion on European integration. As nationalism takes hold throughout Europe, the view of the EU will inevitably change, and European leaders must prepare to face these challenges in the upcoming years.

Watch the event on BUniverse:

This event was organized as part of EU Futures, a series of conversations exploring the emerging future in Europe. The EU Futures project is supported by a Getting to Know Europe Grant from the European Commission Delegation in Washington, DC to the Center for the Study of Europe at Boston University.