On Wednesday, April 20, we hosted Spanish journalist José Ignacio Torreblanca, Head of ECFR’s Madrid Office and Senior Policy Fellow at ECFR and in its European Power program. Sofia Perez interviewed Torreblanca on the subject of his 2014 book, Who Runs Europe? Reconstructing Democracy, Bringing Citizens Back In.

This event took place as part of a new series of conversations on issues pertinent to democratic politics in the US and Europe entitled “Interferences.” The series is part of a larger project entitled EU Futures, the aim of which is to explore the emerging future in Europe. EU Futures is supported by a Getting to Know Europe Grant to the Center for the Study of Europe from the European Commission Delegation in Washington, DC, 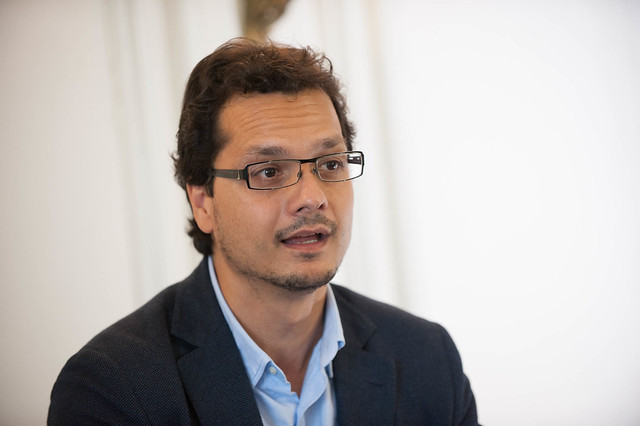 The event began with a brief introduction of Torreblanca by Perez, who immediately delved into asking about his recent book, and the deep rooted question: who governs Europe? She explained how the author argued that there has been a failure of democracy at several levels within the European Union, and she prompted Torreblanca to give a deeper analysis of his view of the current political situation in Europe. He replied by explaining how his novel was inspired by Robert Dahl’s book Who Governs? Describing how Europeans never asked this question prior to the crisis, he stated, “if things work well, you don’t care how they work.” Continuing, the author outlined how the crisis caused a cleavage between many groups not seen before, and exposed underlying divisions across the EU, “bad blood was on the table… and the EU wasn’t delivering.” Torreblanca explained some of the shock at the ‘PIIGS nations’ needing intervention similar to third world countries, and how many citizens began to consciously care about the results of European elections. Torreblanca described the process of investigating how democracy was failing in Europe, by primarily addressing how the EU is the first attempt at a supranational democratic authority, becoming an experiment in the sphere of political governance which faces the pressures of legitimization by citizens.

Perez followed the first exposition by Torreblanca by questioning the junctures in Europe: North vs. South (creditor/debtor state Eurozone division) and the East vs. West (foreign policy and the refugee crisis). She asked the author about the proposal for the creation of a EuroChamber controlling an accountable executive who will be given more fiscal power. Torreblanca began by explaining how the monetary union in the EU was driven by politics, originating in the post WWII era when France attempted to control German through economic interdependence. He briefly discussed how some people have become Euroskeptics who want to give up on the European experiment, but continued by clearing stating how Europe cannot go backwards given the history of civil wars and conflicts of the European continent. He agreed that the EU needs more economic governance, saying “governance is defined as government without government, which is a very democratic contradiction,” briefly commenting how it is confusing for both citizens and the policy makers attempting to create a functioning monetary system. The author continued by explaining the “politicized bureaucracy” of the European Commission and how the government has become ineffective in handling crises, such as the current pressures of refugees entering Europe, and how confused mandates has led to limited accountability.

Perez carried the conversation toward the decentralized consequences on the national democratic level in Spain, including the rise of the right. She pointed out how the countries that suffered the must from the financial crisis are now being forced to handle the migration crisis, and how, especially in Spain, citizens are turning against their political elite. Torreblanca explained how in period following the financial crisis, some people feared a loss of confidence in democracy similar to the 1930s, a time of social injustice. He described how the indignados demonstrators were basically demanding representative democracy, “I don’t want to get rid of the system, I want the system to work.” The author then addressed the contradiction of migration trends and xenophobia, and how many of the northern and western European countries are nearly hypocritical in their political platforms, and he explained how Spain was more accepting of immigration because of their experiences in the past decades with large movements of people into and out of the nation.

Perez opened the floor to audience questions, and Vivien Schmidt asked Torreblanca on the current political environment in Spain as Podemos has shifted from a social movement to a political party. Torreblanca explained how Podemos is a “political party of political scientists,” and used a metaphor to compare the opinion of the party interpretation emphasizing the importance of TV in contemporary politics to the role of gunpowder against castles in the Middle Ages. Using polls to mobilize the fed up population, Torreblanca described several of the key figures in the Podemos movement against the ingrained political system. He explained that Podemos began in South America, and how even as a leftist party, they have experimented and adopted many elements of populism and nationalism. The author explained how “before, politics was about the median voter,” and how polarization has become customary across Europe, especially in Spain as Podemos has been trying to pressure the social democrats to move farther left on the political spectrum away from the small pragmatic parties at the center. The next question posed to Torreblanca referred to the integration of Podemos’ political platform and economic policy and the author described their “dogmatic” understanding of financial markets and capitalism.

Perez continued with her questions, positing the issue of identity in the EU, both at a European level and a micro-identity of national identity, such as the issue of Catalonian independence in Spain, and how it impacts the agenda of Podemos. Torreblanca described some of the issues surrounding Catalonian autonomy, comparing Spanish national political issues to those across the EU and the importance of setting a national agenda in the midst of crisis, as well as the contentious debate in Catalonia over whether to identify as “European, Spanish, or Catalan?” The final question asked by Perez asked the author to comment on the potential repeat of elections in Spain and what should we expect. Torreblanca laughingly said that while political scientists are bad at predicting the future, preferring to look to the past, he believes that the main two parties are probably going to retain the majority of the vote. However he described the changes in the electorate given the generational shifts in Spain and the rise of many new political parties across the political spectrum. Torreblanca said the question of turnout will have the greatest impact on the results of the election, particularly among disillusioned young voters, but concluded that truly, he has no idea what will happen or what the future holds for Spain.

Watch the event on BUniverse!