Leontief Prize for Advancing
the Frontiers of Economic Thought

The Leontief Prize, in memory of Wassily Leontief, is designed to recognize outstanding contributions to economic theory that address contemporary realities and support just and sustainable societies. Since establishing the Leontief Prize in 2000, GDAE has awarded the prize to numerous distinguished economists including Amartya Sen, John Kenneth Galbraith, and Herman E. Daly. To learn more about our recipients, the events, and some of their lectures, please follow the links below.

The Global Development And Environment Institute established the Leontief Prize in memory of Wassily Leontief, our friend and, from 1993 until his much regretted death in 1999, a member of our external advisory board. It is designed to recognize 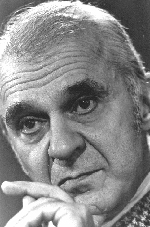 Wassily Leontief is best known for the single, powerful methodological advance which earned him a Nobel Prize in 1973: the invention of input-output analysis. In talking with Wassily, and in reading his work, it was always clear that he perceived his special contribution within an even larger framework.

He was deeply concerned that economics maintain a proper balance between theoretical and empirical analysis. He cared a lot about facts — the visible wrinkles on the otherwise invisible fabric of Truth. He had no patience for beautiful abstractions without application: his lifetime work was based on an unwavering assumption, that the purpose of economics is to be useful. Being useful meant making it possible for human beings to interact with the physical world in ways that would better the human condition.

Leontief’s most concrete influence on the Global Development And Environment Institute grew out of his ongoing relationship with his natal Russia. He encouraged us to develop an introductory economics textbook for that country, whose history has in no way prepared it to use simple translations of U.S. economics texts. With Wassily’s encouragement we worked with Russian economists, as well as with Kelvin Lancaster and Thomas Weisskopf in the U.S., to provide an introduction to market economics that takes account of Russia’s reality. The resulting textbook was published in Russia in 2002 and has been revised for use in other countries as well.

By Maneesha Kaur There is a specter haunting the field of economics, and...

In a short op-ed, published in the Nepali magazine Business 360, What is a...