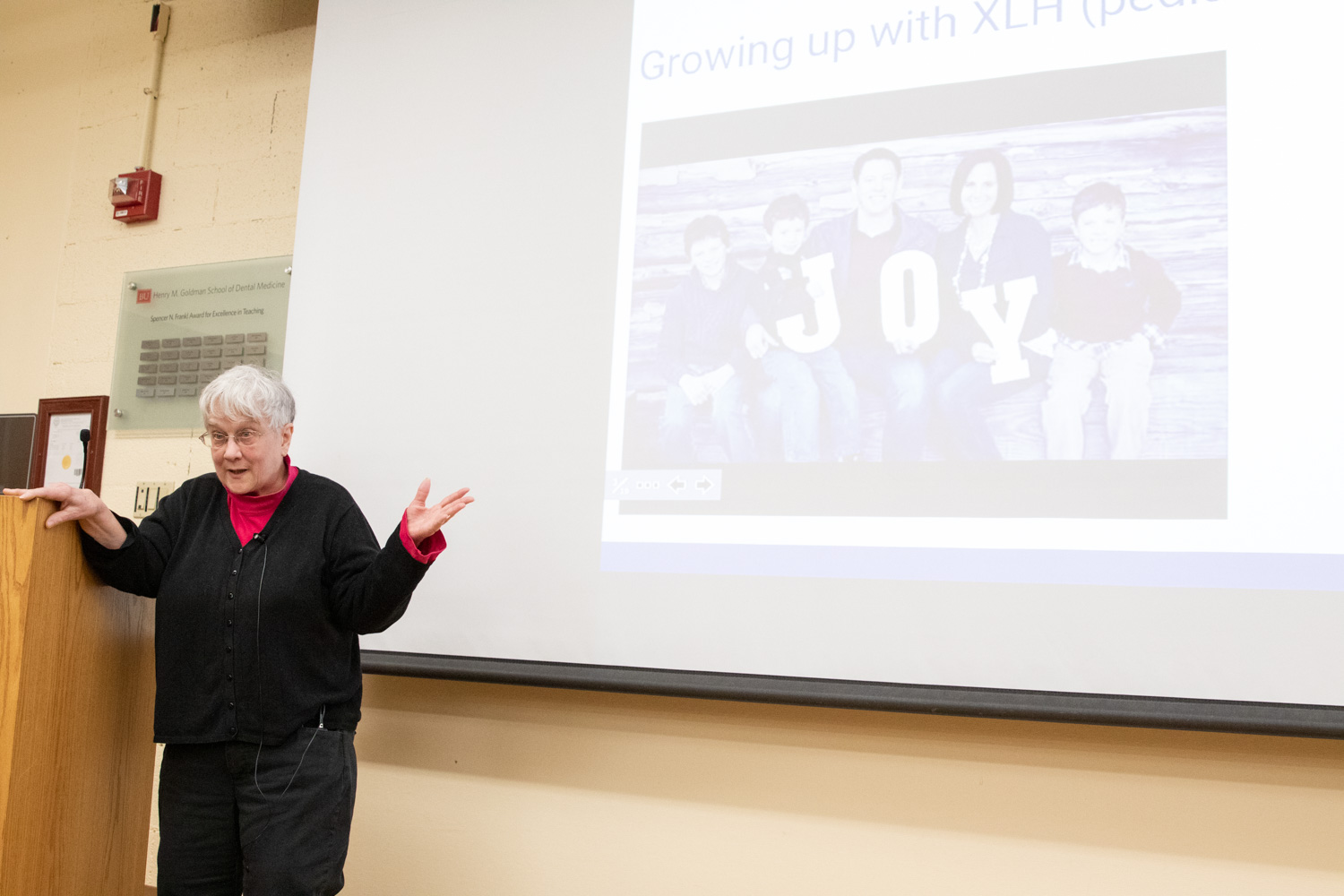 X-linked hypophosphatemia (XLH) is a disease so rare that 90 percent of dentists will never see a patient who has the disease. But on October 4, 2019, about 75 members of the GSDM community were able to learn more about the disease from the patient perspective when Gin Jones, who suffers from the disease, shared her experiences.

Jones’ presentation was the third in the Patient Seminar Series, an ongoing event where patients, family members and legislative advocates share their knowledge of rare diseases, helping to “put a face” on oral-related diseases not often encountered.

Dr. Yoshiyuki Mochida, clinical associate professor in the department of Molecular and Cell Biology organized the series, which he said aims to spread awareness about disorders not commonly taught in the classroom.

“For many years, much effort has been focused on teaching about common disease in dental education, but little is taught in the classroom regarding congenital rare disorders of the mouth— possibly because there is a lack of faculties who are familiar with these conditions, or because dentists have never seen such patients and cases,” Mochida said.

“This seminar series is intended to fill such a gap in dental education and give a broader awareness of rare diseases affecting dental/craniofacial conditions in a classroom setting by our patients.”

Individuals with XLH may have bowed or bent legs, short stature, and bone pain. Orally, XLH patients are likely to have a thin layer of dentin, large pulp chambers and high pulp horns. They also often have microfissures in their enamel, leading to delayed or abnormal eruption of teeth and teeth prone to spontaneous abscesses. XLH patients are no strangers to root canals: Jones said she has had a root canal on every remaining tooth in her mouth.

Treatment of XLH has included phosphorus supplementation, along with Vitamin D. An effective treatment for XLH, Burosumab (brand name Crysvita), was approved by the FDA in 2018.

During her presentation, Jones shared the physical challenges that she and other patients with XLH endure while receiving dental care, from being unable to move as easily in the chair to near-constant spontaneous abscesses.

XLH patients also encounter many emotional challenges that XLH patients encounter when it comes to seeing an oral health professional, Jones said. According to Jones, many XLH patients are embarrassed about their oral health, and are often made to feel guilty about it. Others find that oral health providers ignore or don’t believe their symptoms, which can cause XLH patients to become defensive, mistrustful, pessimistic, or cynical about receiving dental care, she said.

“We are so thankful that Ms. Jones took the time to speak with our students, faculty, residents and staff to help us expand our understanding of her condition,” Dean Jeffrey W. Hutter said. “By sharing her experiences, she is helping students at GSDM to become better health care providers.”

“Being listened to is really, really important for us rare disease people,” Jones said.

GSDM, Tufts, and Harvard provide free endodontic care to 50 patients as part of Day of Giving