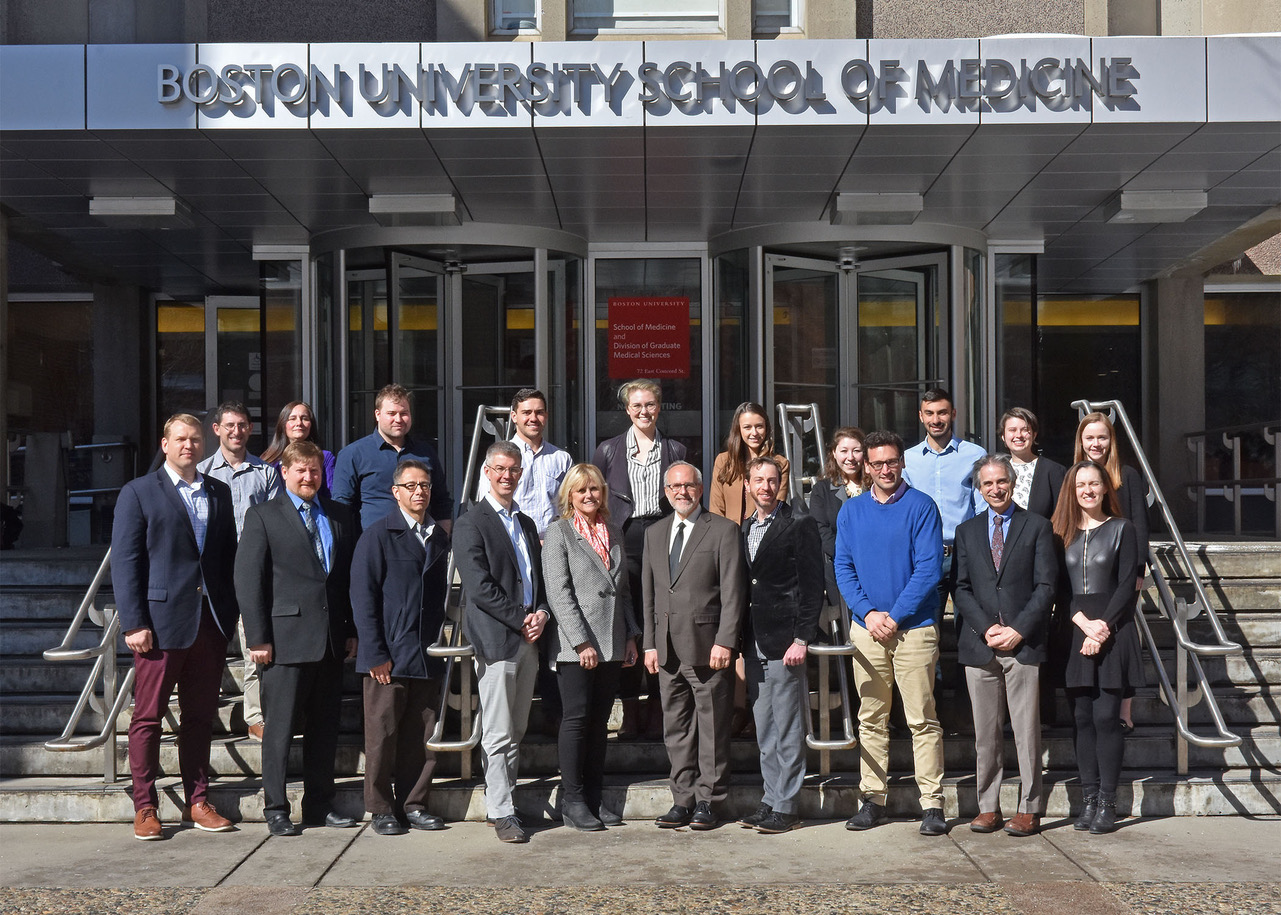 The VA-BU-CLF Brain Bank is the largest tissue repository in the world focused on traumatic brain injury (TBI) and CTE. The VA-BU-CLF Brain Bank research team conducts cutting edge research on Chronic Traumatic Encephalopathy (CTE) and mild traumatic brain injury. The brain bank contains more than 600 brains, including over 325 brains that have been diagnosed with CTE using the recently defined NINDS criteria for the diagnosis of CTE (6). Dr. McKee and her team of neuropathologists and other investigators have published a large number of studies focused on CTE (see below).

Collects central nervous system tissue samples (brain, spinal cord and eyes) from deceased athletes to better understand the long term effects of mild traumatic brain injury (mTBI) and Chronic Traumatic Encephalopathy (CTE). Researchers at the VA-BU-CLF Brain Bank are dedicated to improving understanding of the long term consequences of mTBI and advancing the diagnosis, treatment and care and for Veterans and civilians living with mTBI and CTE.

Reports findings to caregivers in a timely fashion

Shares data and other findings with other researchers

The VA-BU-CLF research team is focused on developing:

All publication of findings are de-identified (without name and identifiable details) unless the CTE Center has received permission from the family to publicize the subject’s participation.

Family members of deceased athletes may donate their loved one’s brain and spinal cord after their death to the VA-BU-CLF Brain Bank to be examined neuropathologically for evidence of CTE or other disorders of the central nervous system. The family member(s) will be interviewed for a history of their loved one, including their loved one’s athletic and concussion history, educational and occupational history, medical history and history of cognitive, behavioral, and mood symptoms.

For questions regarding your Brain Donation Registry Card, please contact Kelly Dean of the Concussion Legacy Foundation at 857-244-0810 or KDEAN@CONCUSSIONFOUNDATION.ORG

Pathology, the scientific study of the nature of disease and its causes, is the bedrock of medical research. Usually, before a disease can be diagnosed in living people or treated, it must be understood pathologically.

In 2009, only 51 cases of CTE had been studied pathologically and published in medical literature. By 2018, this number has risen to over 320 cases of CTE.

Much can be learned by combining pathology with a retrospective examination of the person’s life and clinical symptoms. Please review the case studies below. If the case is identified by name, the family has given explicit permission to share their story with the hope of increasing understanding of this devastating disease.

Member of NFL Hall of Fame, died at age 82 Mike Borich, a former college football wide receiver, died of a drug overdose in February 2009. Borich played for Snow College and Western Illinois University in the 1980s, and was later a football coach for the NFL’s Chicago Bears and multiple division 1 college teams. Mr. Borich was the first advanced case of CTE discovered in a college football player who did not play professionally.  Mr. Borich also represents the first case of CTE diagnosed in a wide receiver. Photomicrographs of normal control brain (top panels) and the brain of Mike Borich (bottom panels), immunostained for tau protein (brown) and counterstained with cresyl violet (purple). Virtually no tau deposition is found in the normal control brain whereas numerous tau containing neurofibrillary tangles are found in individual nerve cells of the brain of Mike Borich.

The first deceased athlete examined by the CSTE researchers was John Grimsley, former linebacker for the Houston Oilers and Miami Dolphins, who died in February 2008 at the age of 45 from an accidental gunshot wound.  Examination of Mr. Grimsley’s brain confirmed extensive CTE. In both sets of photographs, below, the brain tissue has been immunostained for tau protein, which appears as a dark brown color. Former Tampa Bay Buccaneer Tom McHale died in 2008 at age 45 from a drug overdose. Mr. McHale, Cornell University graduate, was a successful restaurateur and husband and father of three boys. He was the sixth former NFL player to be diagnosed post-mortem with CTE. John Doe (the family has asked to keep his identity private) was a multi-sport athlete who suffered multiple concussions in high school football. Analysis of Mr. Doe’s brain revealed the earliest evidence of CTE ever recorded. Prior to 2009, the precise immunohistochemical and pathological characterization of CTE had never been described and there was no rigorous compilation of the clinical and demographic findings. This manuscript was the first to report that the pathology of CTE was distinctive and consisted of an irregular accumulation of phosphorylated tau pathology in a perivascular and irregular pattern at the depths of the cortical sulci. She also described the involvement of the medial temporal lobe in later stages of the disease with prominent involvement of the brainstem and deep cholinergic nuclei. The neurodegeneration was latent; occurring 8-10 years after the last trauma, was very typically slowly progressive (as long as 40 years), with prominent behavioral and personality changes in addition to cognitive changes and memory loss. This paper marked the beginning of a worldwide upsurge of interest in the chronic effects of repetitive head impacts.  Although there had been several previous case reports of CTE in the literature, this was the first major academic publication that established CTE as a distinct tauopathy. The manuscript has been cited more than 1100 times and is the most cited and the most viewed manuscript at J Neuropath Exp Neurol.

In this manuscript, McKee et al first reported the association between Amyotrophic lateral sclerosis and CTE in a 2 American football players and a boxer.

The pathological consequences of blast injury on the human and mouse brain were not known in 2012. This manuscript presented the pathological features of the first series of blast-exposed military veterans and demonstrated the remarkable similarities between blast and  concussive injury. The manuscript also introduced a novel mouse model of blast injury that recapitulates memory impairments, axonal damage and pathology found in humans exposed to blast.

In 2013, this was the largest case series ever published on the clinical and pathological characteristics of CTE. A cohort of 85 subjects with histories of repetitive mild traumatic brain injury and 18 age-matched controls were analyzed; CTE was found in 68 subjects, including 64 athletes and 21 military veterans

cases (63%). In addition, this manuscript was essential in establishing the neuropathological diagnostic criteria, pathological staging scheme and clinicopathological correlations for CTE. This manuscript had remarkable repercussions on the rules of play in football and hockey, the management of concussions in sports, and the understanding the neurobiology of neurodegeneration after trauma.

This manuscript described the most common clinical symptoms found in individuals diagnosed with CTE. The manuscript described three primary areas of clinical symptoms in CTE: behavioral changes including impulsivity, apathy, verbal and physical aggression, suicidality, explosivity, short fuse, and irritability; mood symptoms of depression and hopelessness and cognitive changes of memory loss, executive dysfunction and attention loss. In general, individuals who present earlier in life, mean age 35 years, tend to present with behavior or mood changes, whereas individuals who present later in life, mean age 55 years, tend to present with cognitive changes.  The more we understand the symptoms of mTBI and CTE, the better our chances of intervention in cases where individuals are suffering and may even be contemplating taking their life.

As a consensus panel funded by the NINDS/NIBIB to define the neuropathological criteria for CTE, the preliminary neuropathological criteria established by McKee et al 2013 were used by 7 neuropathologists to evaluate 25 cases of various tauopathies, including CTE, Alzheimer’s disease, progressive supranuclear palsy, argyrophilic grain disease, corticobasal degeneration, primary age-related tauopathy, and parkinsonism dementia complex of Guam. The results demonstrated that there was good agreement among the neuropathologists who reviewed the cases (Cohen’s kappa: 0.67) and even better agreement between reviewers and the diagnosis of CTE (Cohen’s kappa: 0.78) using the preliminary criteria. Based on these results, the panel refined the preliminary criteria and defined the pathognomonic lesion of CTE as an accumulation of abnormal tau in neurons and astroglia distributed around small blood vessels at the depths of cortical sulci and in an irregular pattern. The group also defined supportive but non-specific features of CTE recommended a minimum blocking and staining scheme for pathological evaluation and made recommendations for future study. This study provided the first step towards the development of validated neuropathological criteria for CTE and paved the way towards future clinical and mechanistic studies.