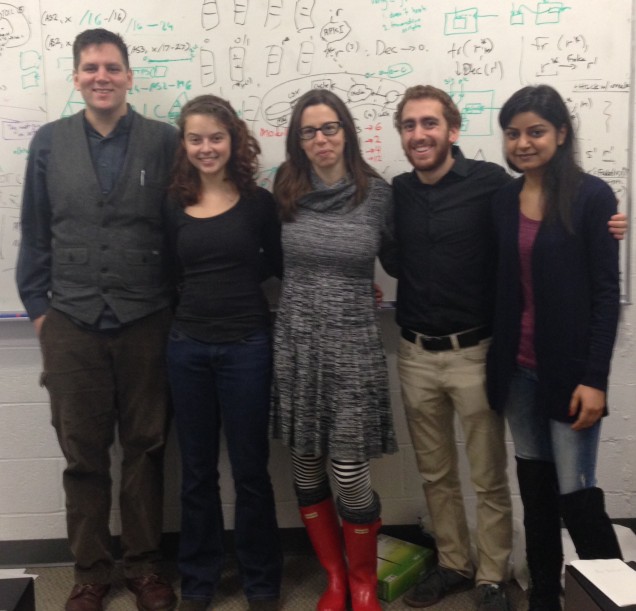 Alison has worked on several research projects.  One of her projects, that appeared at USENIX Security 2015 conference, presents eclipse attacks on bitcoin’s peer-to-peer network. These attacks allows an adversary that controls many bitcoin nodes to monopolize all connections to and from a victim bitcoin node. The attacker can then exploit the victim for attacks on bitcoin’s mining and consensus system.  The paper, [LINK] which was joint work with Ethan Heilman (BU PhD candidate) and Prof. Sharon Goldberg, resulted in several security patches the reference software implementation of bitcoin.   In addition to this project, Alison has worked with Sharon Goldberg on projects related to routing security and digital rights management, and with Dr. Blake Anderson at Cisco on using machine learning to detect intruders and malicious messages in encrypted network traffic. .

Isaac’s award was received for his research on the security of the Network Time Protocol (NTP) [LINK], joint work with Aanchal Malhotra (BU PhD candidate) and Prof. Sharon Goldberg.  Time on computer clocks is commonly set using the Network Time Protocol (NTP). This work uncovered several security issues affecting unauthenticated NTP and its reference implementation ntpd, that were patched in the most recent release of ntpd. His research results were published at the 2016 Network and Distributed System Security Symposium (NDSS’16).

by Kayla Chapman Since Tuesday, March 17th, life has been very different for...

In accordance with University and state recommendations, the Department of Computer Science...

BU CS's own Abbas Attarwala has been selected to receive the 2020...