Professor Jim O’Connell is a Community Planner at the Boston Office of the Northeast Region of the National Park Service, where he specializes in planning for historic sites and heritage areas, in addition to being a faculty member in the City Planning and Urban Affairs program. His expertise lies in urban history, metropolitan Boston planning and development, urban and regional planning, and heritage planning.

Dining Out in Boston: A Culinary History is Professor O’Connell’s sixth book which explores the city’s rich, extensive history from its largely unknown culinary past. The book chronicles the evolution of restaurants in Boston from its Parisian-style beginnings in the 1790s, to the contemporary styles of the present. Dining Out in Boston reveals the city’s influence on American eating by detailing how Boston was a pioneer in elaborate hotel dining, oyster houses, French cuisine, banquets, ice cream parlors, ethnic cooking, the colonial revival of traditional New England dishes, the “gourmet revolution,” as well as student hangouts, contemporary locavore, and trendy foodie culture. The book is filled with an extensive array of historic menus and photos used to highlight and trace the development of the city’s culinary heritage, explaining the use of foodstuffs, recipes, dining customs, restaurant types, clientele, and evolving attitudes towards eating and drinking.

Andrea: What was your inspiration for this book, or your motivation to write about this particular topic in Boston’s history?

O’Connell: I’m an urban historian who’s always been interested in restaurants, food, and eating. I was at the Bostonian Society, and I accidently came across a collection of historic menus of Boston restaurants in local archives dating from the 1820’s to the 1950’s, and I said to myself, there’s a story here. After doing some more research, the story told itself.

Andrea: During your research, was there anything you found that was particularly interesting, or that you didn’t expect to find?

O’Connell: What I found was absolutely astonishing. In the nineteenth-century, there was this astonishing variety of food. They had these ten course banquet style meals in nineteenth-century hotels and restaurants that the affluent classes were part of. This was all happening in the urban centers and big cities. This was the scene downtown. They were like dining incubators.

Game was very big during this time. Taft’s Hotel served sixty different game birds from all over, not just New England. Boston has always had a reputation for having bland, boring puritan food. The “beantown” image, but people were eating all types of food. Ethnic food also became very popular and common in the late nineteenth-century. Not until the twentieth-century, does food become more streamlined and healthy.

During the nineteenth-century, dining and restaurants were concentrated in the cities. It was not until the rise of automobiles that restaurants started moving out to the suburbs. There were dozens of neo-colonial inns that had fine dining through the 1960’s. These New England inns located in the suburbs were the best eating places in the area and this is where “Yankee” food gets reinvented.

Andrea: If you could go back in time, is there any restaurant from Boston’s past that you would like to dine in?

O’Connell: I would like to dine in Young’s Hotel. It was open between 1860 and 1927. It had a fifteen page menu with dozens of steak dishes and dozens of clam dishes. It’s hard to say what the quality of the food was with such an extensive menu, but it would have been impressive to see.

Andrea: What are some of your favorite contemporary restaurants? How do they best represent Boston’s current dining culture?

O’Connell: Today, restaurants in Boston are complicated, like the rest of the restaurants in the U.S. Up until the 1970’s, restaurants weren’t into innovation. They preferred the classics. Now restaurants are all about innovation and what’s new and exciting. I prefer the classic ethnic restaurants. If you ask me about a particular ethnic cuisine, chances are I’ve tried it and I like it. I’m not into the shock and awe of new innovation.

Andrea: Tell me a little about the talk you’re giving to the BU Food and Wine program in March.

O’Connell: My talk will dig into more of the present day. I’m excited about this talk at the BU Food & Wine program because there should be people there interested in this topic, and I’m interested in creating a dialogue about present day food and restaurants and what people’s opinions are of them. I’ve developed an interesting and exciting presentation filled with lots of visual materials, such as the historic menus and photos of restaurants that I think the audience will find fascinating. 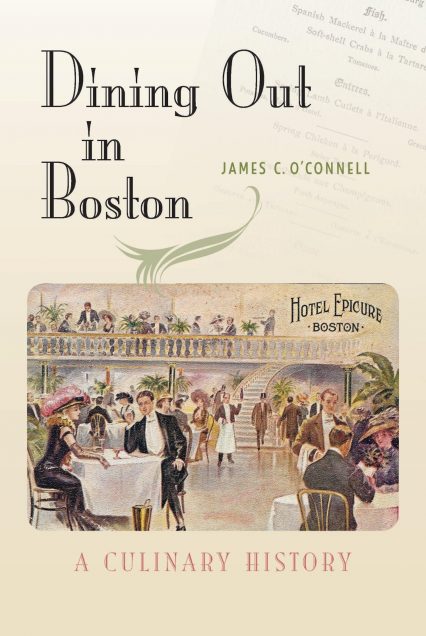 Professor O’Connell will be giving an illustrated presentation based upon his new book on Tuesday, March 21st at 6:00 p.m. in CAS-211 for the BU Food & Wine program. This event is free and open to the public. Please register here.

For more information about Dining Out in Boston; A Culinary History, see https://diningoutinboston.com.

You can read more about Professor O’Connell’s background here.