Until now, there has been no effective, systemic treatment for liver cancer (hepatocellular carcinoma), the fifth most common cancer worldwide. Writing in the Proceedings of the National Academy of Science (PNAS), Professor Scott Schaus (Chemistry) and Professor Ulla Hansen (Biology and Molecular Biology, Cell Biology & Biochemistry) have reported their discovery of a new protein target for chemotherapy in the treatment of liver cancer — the transcription factor LSF. LSF occurs at high levels in the tumor tissue of patients with liver cancer and is known to promote the development of cancer (oncogenesis) in studies using laboratory rodents.

The co-investigators have identified small molecules that effectively inhibit LSF cellular activity, which in turn slows the growth of the cancer. In particular, they found that one such molecule, Factor Quinolinone Inhibitor 1 (FQI1), derived from a lead compound, inhibits the ability of LSF to bind DNA both in extracts (in vitro, as determined by electrophoretic mobility shift assays) and in cells. Consistent with inhibiting LSF activity, FQI1 also eliminates the ability of LSF to turn up transcription. While FQI1 quickly causes cell death in LSF-overexpressing cells, including liver cancer cells, healthy cells are unaffected by the treatment. This phenomenon has been called oncogene addiction, where tumor cells are “addicted” to the activity of an oncogenic factor for their survival, but normal cells can do without it. This characteristic is very encouraging for use
of such compounds clinically. 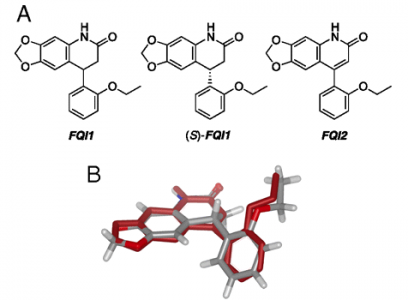 Following in vitro trials, the researchers tested the efficacy of FQI1 in inhibiting liver cancer tumor growth by injecting HCC cell lines into rodent models. FQI1 was observed to significantly inhibit tumor growth with no observable side effects (general tissue cytotoxicity). These dramatic findings support the further development of LSF inhibitors as a promising new chemotherapy treatment for liver cancer.

ScienceDaily, has featured the research of a team of Boston University scientists in which they identified a novel compound that inhibits viruses from replicating.

The findings, which were published online in the Journal of Virology, could lead to the development of highly targeted compounds to block the replication of poxviruses, such as the emerging infectious disease, Monkeypox.

Investigators from the Boston University School of Medicine (Dr. Ken Dower and Dr. John Connors) teamed with Professor Scott Schaus to use a library of chemicals from the CMLD-BU to identify compounds that could stop vaccinia from replicating inside human cells.

Read the ScienceDaily article at:

END_OF_DOCUMENT_TOKEN_TO_BE_REPLACED 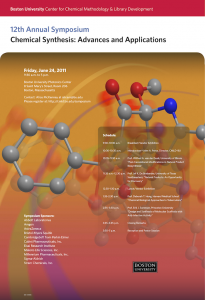 See the CMLD's website for the schedule and how to register to attend:

NIGMS Renews Funding for the CMLD-BU

The National Institute of General Medical Sciences (NIGMS) is continuing its support of the CMLD-BU as one of five Centers of Excellence addressing the problem of how to develop small molecule libraries and techniques for making them that meet all the needs of pharmaceutical and biomedical scientists.

The CMLD-BU was originally established in 2002. The renewal is for another 5 years (through 2013) and is worth more than $11.5 million. The first year's funding, $2.6 million, will be used to develop microfluidics and other strategies to synthesize small molecules for application by the biological community. The program is highly collaborative. Professor John A. Porco, Jr., who is the Director and Principal Investigator, is joined by Co-PI's Professors Jim Panek, Scott Schaus, John Snyder, and Corey Stephenson, who are leaders in the field of organic chemistry.

The goal of the Center is to develop cutting-edge technologies to generate, analyze, and optimize chemical libraries and synthesize thousands of novel chemical entities using high-throughput techniques. It is also making these methods and libraries broadly available for biomedical research and drug discovery. The CMLD's PI's are collaborating with biologist, Professor Tom Gilmore, to determine the physiological activities of new molecules.

Co-investigators of the Boston University Chemical Methodology and Library Development Center (CMLD-BU) (http://cmld.bu.edu) have been awarded a three-year grant for their joint proposal “Generation of Stereochemically and Structurally Complex Chemical Libraries.” The goal of the work by Professors Porco, and co-Principal Investigators Panek, Schaus, and Snyder, is to generate a number of stereochemically and structurally complex chemical libraries for inclusion in the National Institutes of Health (NIH) Molecular Repository (http://mlsmr.glpg.com/MLSMR_HomePage/index.html). They will develop five library projects that are distinct from ongoing and planned CMLD-BU library projects, but which utilize novel chemistries previously developed in their laboratories. Target pilot libraries include complex dihydropyrimidones, azaphilone-derived libraries, tetracyclic alkaloid-type libraries, exo-methylene scaffolds and derived spirocycles, and macrocyclic lactams. In addition, all planned libraries have been designed to include unique structures that do not overlap in chemical space with molecules currently in the PubChem database. Data will be shared using an internet-based structure-searchable database of synthesis protocols.

The Molecular Libraries and Imaging Initiative is a component of the “New Pathways to Discovery” theme of the NIH Roadmap, which seeks to enable the rapid transformation of new scientific knowledge into tangible benefits for public health. While high-throughput screening (HTS) of small-molecule libraries is widespread in the pharmaceutical industry, the goal of the Molecular Libraries (ML) Roadmap Initiative is to facilitate the use of HTS and chemical libraries within the academic community. It is anticipated that the ML initiative will produce research tools (including novel small-molecule modulators of cellular function and phenotypic assays) to facilitate studies of biology and physiology (http://nihroadmap.nih.gov/molecularlibraries). It is anticipated that the initiative will complement private sector drug development efforts by contributing to the identification and validation of novel drug targets, as well as molecular structure classes with potential for development into therapeutics. The initiative promises benefits to public health, especially for rare or marginalized disorders.