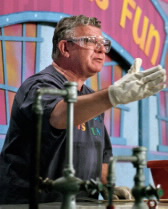 Nothing makes us prouder than being able to to claim Bassam Z. Shakhashiri, Ph.D, Professor of Chemistry at the University of Wisconsin-Madison as one of our own! He received his B.A. in Chemistry from BU in 1960. It launched him on a distinguished academic career that includes an M.Sc. and Ph.D from the University of Maryland, being named the first holder of the William T. Evjue Distinguished Chair for the Wisconsin Idea, and receiving seven honorary doctoral degrees. He is a distinguished scientist whose ability to explain and demonstrate science with charisma and passion is legendary. He is well known internationally for his effective leadership in promoting excellence in science education at all levels and for his development and use of demonstrations in the teaching of chemistry in classrooms, as well as in less formal settings such as museums, convention centers, shopping malls and retirement homes. The Encyclopedia Britannica cites Shakhashiri as the “dean of lecture demonstrators in America.”

Dr. Shakhashiri’s scholarly publications, including the multi-volume series, Chemical Demonstrations: A Handbook for Teachers of Chemistry, are models of learning and instruction that have been translated into several languages. Professor Shakhashiri has given over 1100 invited lectures and presentations in North America, Europe, Asia, Australia, the Middle East, and South America. He is known to the public at-large in the USA for his annual program, “Once upon a Christmas Cheery in the Lab of Shakhashiri,” which has been seen on PBS and on cable television stations throughout the country. Professor Shakhashiri has been featured in newspapers, magazines, national and local radio and television, including the New York Times, the Washington Post, Newsweek, Time, the German-language Business Week, NBC Nightly News, National Public Radio, CNN, and the Larry King Show. He appears as a regular guest on the Ideas Network of Wisconsin Public Radio. 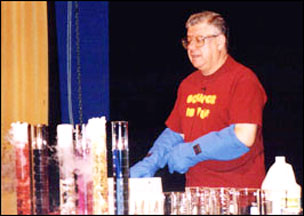 In 1977, Professor Shakhashiri was the founding chair of the University of Wisconsin System Undergraduate Teaching Improvement Council. In 1983 he founded the Institute for Chemical Education (ICE) and served as its first director. His work with ICE inspired the establishment of the Center for Biology Education, the Merck Institute for Science Education, the Miami University (of Ohio) Center for Chemical Education, among others. From 1984 to 1990 Professor Shakhashiri served as Assistant Director of the National Science Foundation for Science and Engineering Education. Professor Shakhashiri is a consultant to government agencies, industry, and private foundations on matters related to education at all levels. He currently directs the Wisconsin Initiative for Science Literacy and its various programs including Science in the City; Science, the Arts, and the Humanities; Women in Science; the Conversations in Science Series; and SCIENCE IS FUN! (www.scifun.org). In 2005 he received the ACS Helen M. Free Award for Public Outreach.

Bassam has maintained loyal contact with BU and with our Department, serving as friend and counselor. In addition to pride, we must add gratitude for our connection to him.