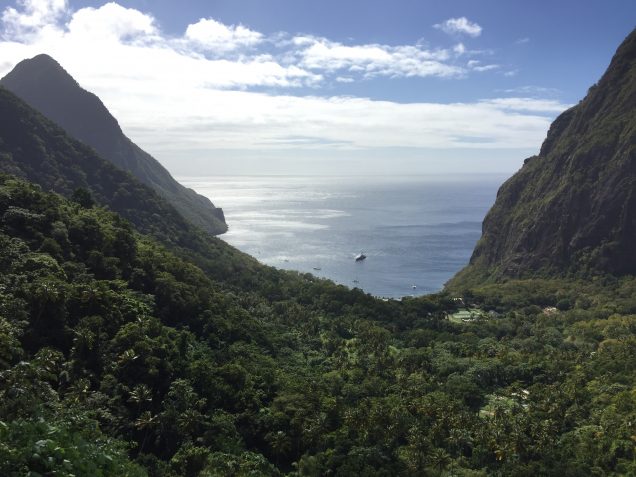 Today I’m flying back to Boston from St. Lucia on Derek Walcott’s birthday—January 23. He is 87 years old today. I have been coming here for years on this week where the entire island celebrates his birthday with readings at the Governor’s House and with the “Nobel Speech”—this year given by Jamaica Kincaid. Many of Derek’s friends come from all over the world to celebrate with him as well—Esperanza from Spain, Mindy from China (via Los Angeles), Caz from North Carolina (via Yale and St. Kitts), Glyn and Marie-Cristina from Essex and London, Adriana and Martin from Transylvania and Canada, Michael from North Dakota. This year we are missing some stalwart visitors like Stephanos from Greece, Derek’s translator Matteo from Italy, John from New York, and many more. But all of us have become a staunch, if mismatched, team of celebrants, and Derek and his partner Sigrid traditionally take us to dinner, honor us with a boat ride up to Soufriere to have lunch near the active volcano at the Ladara resort (a honeymooners’ paradise where there are no confining walls, only spectacular views of the Pitons); then the return back up the coast to Castries with a late-afternoon stop for a dip in the Caribbean sea. END_OF_DOCUMENT_TOKEN_TO_BE_REPLACED