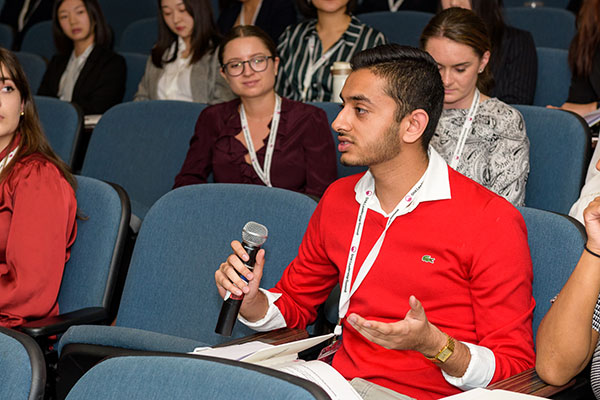 Marut Raval (SHA ’20) poses a question during one of the panel discussions.

By Eric Ieong and Marut Raval

As male students, attending a women’s leadership summit created a sense of uncertainty. Questions jolted around our heads, “Should I not be here? Am I out of place? What will I do during the workshops?” However, as soon as the Summit began, our trepidation began to fade away and transform into inspiration. We realized that the stories shared by these industry leaders transcended the boundaries of gender and were relevant to anyone who wanted to be successful in his or her career. Here are some of our biggest takeaways from the weekend:

Life Is Not as Friendly as You Think It Is.  Deal with It

Airi Shibayama, Catering Associate, spoke about the persona she carried with an East Asian background and coming off as the stereotypical “smart girl.” Crystal Williams, BU Associate Provost for Diversity and Inclusion, spoke about her experiences in the workplace as well, and feels like she is being stereotyped as “the angry black woman” because of her communication style. Naturally, it may feel both overwhelming and unfair to have these stereotypes placed upon a person. The biggest takeaway we had about workplace diversity was that things will not be fair and pleasant, and even though it may feel that the cards are stacked against you because of ethnic and gender-based stereotypes, nothing is accomplished by complaining about the situation. Instead, you should work hard in order to achieve the success you desire. 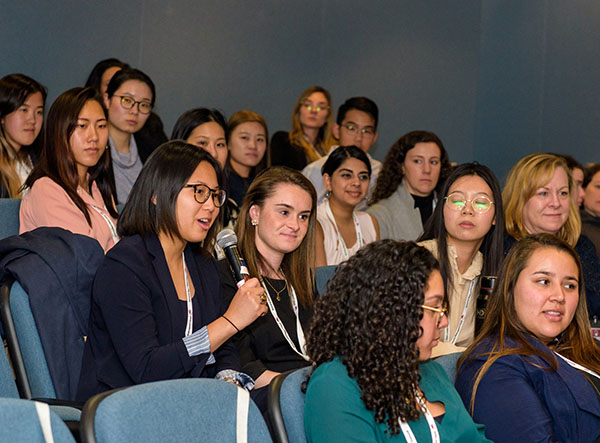 A student asks a question in the foreground, and Eric Ieong (SHA ’19) listens in the background.

You Have to Fight for What You Want

You want to be a General Manager of a hotel? So now what? Some people dream about being a top executive in a company without any hard work, while others persevere to achieve their goals. Our second takeaway is that successful leaders fight for what they want to accomplish. Although obstacles are found on the road of triumph, we witnessed many industry leaders who fought against these difficulties, because they understood the end result was worth fighting for. Tzurit Or, the founder of Boston’s acclaimed Tatte Bakery Café, is the manifestation of someone who pursued her passion. When Tzurit arrived to the United States from her native Israel, hoping to accomplish continued success as a film documentarian, her revived spirit brought her back to the baking she grew up with on the kibbutz. So once in Boston, she started to bake 20 hours a day, sell her pastries to local farmers, and gradually open  her first Tatte Bakery in 2007. Today, there are 12 Tatte Bakeries — because of her dedication. This is also something that Anthony Melchiorri, experienced hotelier and television personality, emphasized at the opening of the Summit. While our female colleagues enjoyed professional development opportunities in the pre-scheduled workshops, the men were able to spend some one-on-one time with Anthony. After speaking about his personal rise to success and how he seized any opportunity he could, he immediately (and rightfully so) called us out for not doing the same. “Not a single one of you asked for (Vera Manoukian’s) or my business card,” he exclaimed. From both Tzurit and Anthony, we saw how vital it is to recognize the magnitude of an opportunity that presents itself. More importantly, we learned the necessity of capitalizing on an opportunity, because if you pass on it, then someone else will surely seize it. 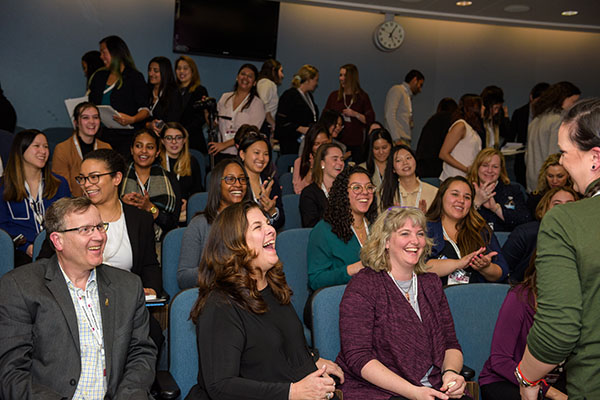 Slow Down: Patience Leads to Success

Keynote speakers and panelists pointed out that mastering the art of patience has become challenging for millennials in the workplace. Hilton SVP and Global Head Vera Manoukian, our Summit opening keynote , shared how millennials are overly ambitious in their career progression. They want to be a General Manager or even a CEO within six months. Admittedly, as future leaders we are eager to climb the corporate ladder within a few years after graduation. However, our speakers emphasized how this is unrealistic since preparation for those roles comes with time. As students who will soon enter the workforce, we understand that there is no shortcut to success. Competency requires years of learning. Additionally, learning all facets of the hotel or restaurant operation, from how to properly make a bed to handling guest complaints, cannot happen overnight. While our keynotes recommended we be patient, they also recognized that aspirations drive us forward and emphasized that staying curious and constantly asking the question “Why?” will certainly help graduates learn and grow into future leadership positions.

It is everyone’s job to create and foster a happy and respectful work environment. One of our overarching takeaways is that future leaders should apply the Golden Rule in the workplace. Treat others the way you want to be treated, regardless of age, ethnicity, or gender. Altogether, the SHA Leadership Summit successfully guided SHA students to think critically across cultures and gender in order to adroitly empower the emerging workforce to manage and lead others in any organization.

Eric Ieong (Boston University, SHA ’19) is a graduating senior at the School of Hospitality Administration. Originally from Macau, he finds his interest in the world of hospitality. He has completed internships in hotel operations at Venetian Macau and human resources at Swire Hotels, Hong Kong. He also has held serval leadership positions within SHA, such as the VP of Finance for SHA Student Government 2017- 2018 and Dean’s Host for 2018 – 2019. Upon graduation, Eric will be joining the Four Seasons Hotel, Macau Strip as a Rooms Operations Manager-in-Training.

Marut Raval is a junior studying Hospitality Administration with a dual concentration in real estate development and marketing. He is from Swedesboro, New Jersey and has held previous internships in hotel operations at IHG and Marriott. In the fall of 2018, he was part of Hyatt’s European Development team in London. Marut will be interning at Hersha Hospitality Trust as a member of the asset management team this upcoming summer.