By Peter Szende and Annie Holcombe

The evolution of society and technology has created new trends and innovations. The hospitality industry tries to stay level with new technological advances in order to keep up and engage with their guests. This modernization has eliminated various practices and inventions that were once predominant in the industry.

Throughout the 19th and 20th centuries, tourism changed dramatically due to the industrial revolution. A middle class emerged in society. This new class had the money and opportunity to spend on food and travel. Travel was made easier with the invention of steam engines that powered locomotives and automobiles. Through modernization, steam engines have been eradicated and replaced by diesel-powered engines.

With travel being made more accessible throughout the decades, the hospitality industry constantly evolved their practices as society and technology progressed. Hotels looked for news ways up service their customers, which led to the invention of the Servidor in 1918. The Servidor enhanced a guest’s privacy during their hotel stay. In Chicago, the Berghoff restaurant successfully operated on an old German system of coins until 1980. These once revolutionary innovations have gone extinct, merely becoming fragments of the past.

The Servidor – The Silent Servant

During the early 1900’s, technological advances such as the electric fridge invented in 1910 and the creation of stainless steel in 1916 started to modernize the hospitality industry. In June 1918, the contraption known as the Servidor began emerging in hotels. The Hotel Fort Shelby of Detroit was the first hotel in the world that implemented Servidor service. (Ibbotson, p. 45).  The Servidor transformed the way hotels provided guest services by offering guests the privacy of a real home.

Servidors consisted of a full-length cabinet, which has one door on the room side and another one on the corridor side. Its privacy feature was the fact that the doors could not be opened at the same time due to an interlocking device. For safety, the door to the room side could only be opened from inside the guest room, not from the outside. This protected guests from intruders. In order to notify the guests that there was a completed delivery in the door there was a silent signal device on the room side of the door. (Hastings, 1919).

A Servidor was used to minimize interaction between guests and employees. Guests would telephone the front desk and request for items to be delivered to their rooms. Guests could also leave their clothes to be pressed or shoes to be shined in the Servidor. A hotel employee would grab it and then return it without disturbing or interrupting guests.  Servidors provided a modernized, efficient system for guests to receive and deliver their personal belongings. Guests were saved the trouble of bringing their parcels to and from the lobby.

This particular invention reduced inefficient practices such as delayed messengers and repeated service calls when guests were out of the room. All of these faulty practices resulted in an ineffective use of employees paid time.  Regardless of where the guests were and the time of day, Servidors allowed for a 24/7, delivery service, whether it was to the guest room or from the guest room. Employees would be able to leave guests’ belongings in the Servidor, thus making the hotel’s labor more efficient.

The following magazine ad summarizes the anticipated advantages of Servidor. According to the Servidor company, installing their doors is a not only a service enrichment but also a profitable investment.

When the Hotel Pennsylvania, the largest hotel in the world at the time opened its door in 1919, the Statler management, known for breakthrough innovations, equipped the hotel with servidor. They enhanced this new feature with a morning newspapers amenity delivered discreetly through the servidor. (World’s biggest, 1919).

The Servidor changed the way hotels provided service to its guest, but also created new problems within its hotels. One issue was that guests would request items and have them charged to their hotel bills, but leave without having paid their bills. These guests were commonly known as skippers. In addition, because the Servidor minimized the interaction between hotel employees and guests, tipping occurred less frequently. When ensuring items were taken from and delivered to the Servidor employees did not come in contact with the guests in order to be tipped.

Although the Servidor was widely seen in hotel advertisements in the middle of the twentieth century, the concept soon disappeared altogether from hotel advertisements. As hotels underwent upgrades and renovations the Servidor slowly disappeared. Today, the only place in the United States where Servidors still exist is the Hotel Pennsylvania in New York City. However, the Servidors are no longer in use and have not been for decades. The doors have been sealed shut and are slowly being phased for modern wooden doors, eventually becoming a fragment of the hotel industry’s past.

Servers are Independent Contractors: The German System of Coins

When the first author did his military service in the early 1980th in Hungary, he worked as a server for a night in an upscale military club where drinks could only be delivered to the guests if he paid for the drinks from his own pocket at the bar and then charged it to the customers. At that time he didn’t know too much about old time European restaurant cash control systems.

During the 1890’s Herman Berghoff, a German restaurateur began his career by selling beer from a stand outside the World’s Columbia Exposition in Chicago. He went on to open the Berghoff Café in 1898 where he sold his Berghoff Dortmunder Beer for five cents a glass and ten cents a stein. During the Prohibition era, which lasted from 1920 through 1933, Berghoff refocused his efforts from beer to making Bergo soda pops. To this day, the Berghoff Rootbeer is still popular. When the end of the prohibition came in 1933, Berghoff became the first person to receive his liquor license, Liquor License #1 was awarded to him for his bar and Liquor License #2 was awarded to him for his restaurant. Since then, Berghoff has received the first liquor license in Chicago every year. 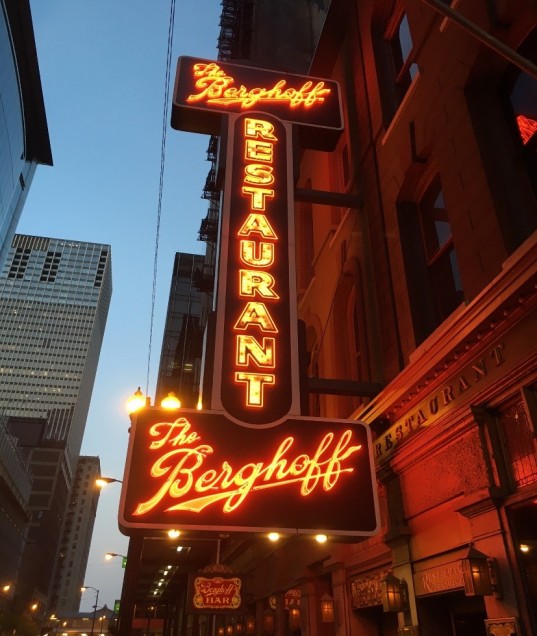 Throughout the years the bar itself has gone through various changes. Originally, Berghoff’s was a men-only bar. However, during the American Feminist Movement in the 1960s through 1970s, Gloria Steinem, a famous women’s rights activist walked into Berghoff’s and demanded to be served. Since, then Berghoff became a men and women’s bar. She modernized the traditional way Berghoff operated. In the 1950’s and 1960’s barstools became very popular and could soon be found in every restaurant and bar. Until 2001, Berghoff was a stand-up bar. Stools could not be found in the bar until 2001. Men and women would eat their sandwiches and drink their beer while standing up. To support themselves they would put their foot on a brass rail that can be found along the bottom of the mahogany bar.

However, the biggest change the bar experienced occurred with modern technology in the 1980’s. Until 1980, the restaurant staff operated on the old German system of coins. The old German system of coins consisted of the waiters buying metal coins from the restaurant at the beginning of their shifts and using those coins to buy their customers’ food and beverages. In return, customers would pay for their bills using cash. At the end of their shifts, waiters’ checks were audited and to prevent theft, they had to “zero out.” (Berghoff, p. 41) Why coins? Servers were busy carrying plates in one hand, so they could easily reach the coins in the pocket of their aprons. (Ledermann, 2004). Their source of income came from their cash tips. With the 1980’s bringing about new technology, this system was soon eradicated with the modernization of computers, credit cards, and the new automated ordering and billing systems.

True, this system seems to have largely disappeared but sporadic, old time examples indicate restaurants’ relentless efforts to secure their revenue. New Orleans’ Café Du Monde is one example of a modern restaurant that loosely follows the German System of Coins. (First Stop in New Orleans, 2010). Servers have trays that they will fill with Du Monde’s famous beignets and chicory root coffee. After they fill their trays, the food is purchased with their cash and the waiters serve their customers with the food. After, they have been served the customers pay the servers for their meal, therefore mimicking the German system of coins. Though the system has largely been eradicated it still influences how some businesses today are run.

Dr. Peter Szende has over 25 years of management experience in the hospitality industry in both Europe and North America. He joined the Boston University School of Hospitality Administration as an Assistant Professor in 2003. He was promoted to Associate Professor of the Practice in 2010. Currently, he serves as Associate Dean of Academic Affairs.

Annie Holcombe is a senior at Boston University’s School of Hospitality Administration. Her studies and areas of interest include sales and digital marketing, revenue management, and finance.

The authors of this article would like to acknowledge the staff of the Hotel Pennsylvania who made taking pictures of the Servidor possible.

The authors would also like to thank Ashley Mazur, Marketing & Media Manager of Berghoff Catering & Restaurant Group as well as Paul Turner, server at the Berghoff for their assistance.