Roman philosopher Cicero believed self-confidence was critical to one’s success: “If you have no confidence in self, you are twice defeated in the race of life. With confidence, you have won even before you have started.” This key to success was reiterated by sports legends Vince Lombardi, “Confidence is contagious. So is lack of confidence.”

In sports, business, politics, and life, the importance of self-confidence is repeated as one of the key components to success. Boston University School of Management Professors George Hollenbeck and Tim Hall define self-confidence as “our judgment as to whether or not we can do something.” They highlight that judgment is the result of our thinking and is based on our perceptions. In addition, they emphasize that self-confidence is task-specific. This aspect of self-confidence underscored by Paul Hersey and Ken Blanchard in their Situational Leadership model, whereby a manager provides more direction to an employee with limited experience (and thus less confidence) for a specific task. In understanding self-confidence, Hollenbeck and Hall also show the importance that it can be changed over time.

How do hospitality managers build their self-confidence? Boston University School of Hospitality Administration seniors take a capstone course in leadership. Each semester, the seniors conduct field interviews to learn how these executives built their self-confidence. The following discussion reports findings from the student surveys collected since 2005. Students met with a wide range of hospitality leaders in operational and corporate positions, from hotel department heads and executive committee members, to restaurant general managers, upscale and luxury hotel property general managers, entrepreneurs, restaurant owners, contract food service companies, and senior-level hotel and hospitality corporation leaders. Participants ran the gamut of experience, including managers near the beginning of their careers and seasoned veterans with decades of experience and success. Over eight years, graduating hospitality seniors conducted more than 450 interviews. Whenever possible, interviews were conducted in person, at the interviewee’s place of business and the student did not have a close, personal connection to the manager. Although the student may work for the same company, the interviewee was someone he or she did not know well (e.g., not a family member, close family friend, or someone who worked directly with him/her). The majority of the hospitality managers interviewed were from the New England / New York area.

Several common themes developed from the industry interviews about the building of self-confidence. The top source for self-confidence in hospitality: experience. Many felt “there is no substitute for experience.” World-class salesman Dale Carnegie agreed in the value of gaining experience—Inaction breeds doubt and fear. Action breeds confidence and courage. If you want to conquer fear, do not sit home and think about it. Go out and get busy. By working in a job, becoming good at it, performing the functions well, and being successful, one can enhance one’s self-confidence in that particular role.

Often the experiences described by interviewees involved making difficult decisions or performing challenging tasks. Their success and confidence propelled them forward to take on more challenging endeavors. One catering manager talked about successful events and was able to increase his budget from 60-thousand-dollar to five-million-dollar events. An interviewee stressed that his successes from entry-level positions to department head, then to executive committee member and assistant GM gave him the confidence and skills to be an effective general manager. This research reinforces the findings by Ireland, Hitt, and Williams from the early 1990s, “Self-confident managers set personal standards for excellence, which are established through a manger’s willingness to work long hours, his or her obvious commitment to excellence, and in the setting and reinforcement of high performance standards.”

Second, in connection to experience, many managers attributed their confidence and success by building upon small wins. Stephen Covey, author of The Seven Habits of Highly Effective People, calls this baby steps: “Start small, keep at it, and stay consistent until you’re ready to pick up the pace.” This reason was particularly prevalent when managers reminisced about their experiences shortly after graduating college. One restaurant manager, after discovering a poor corporate culture, implemented an employee “family meal” every night at 5. This simple action increased employee morale and enabled him to learn more about his staff.

A director of sales & marketing found out that he was going to miss his sales quota by a huge number. Instead of trying to fix everything at once (an impossibility), he set small sales goals for each month and by the end of the year only missed his target by a small amount. A hotel manager for a five-diamond hotel identified building small wins with his first job as a bell person. Being responsible for making guests feel welcome, he had to learn how to make small talk with famous people, politicians, and presidents of corporations as he carried their luggage and provided an overview of the hotel operations and services.

A third component of building self-confidence comes from goal setting. Repeating the findings by Ireland, Hitt, and Williams: “Self-confident managers…often establish more challenging goals and persist in the pursuit of these goals.” One purchasing manager set a goal of reducing the hotel’s exorbitant food costs to one of the lowest for the chain. A sales & catering manager persuaded the general manager and the hotel’s owner to renovate the ballroom, which would set new sales levels for the property. By focusing on the goal of owning his own restaurant, one of Boston’s premier chef/owners survived year of working in challenging situations for less-than-favorable characters. One hotel manager hosts the same annual charity event; although it is always successful and the client is very satisfied, she makes a list of improvements—even if they are only small changes or tweaks—to ensure the function is better the next year

Fourth, many of the managers recognized the importance of others who helped build their self-confidence. The three main sources of support came from bosses, family members, and mentors (who may or may not have been their direct supervisor). Most interviewees highlight at least one of these people, and many identified two or all three sources as helping them to gain confidence. Often the supervisor provided moral support—a belief that the manager could accomplish the task, trusted them, and gave them the opportunity for success. For example, a relatively new restaurant chain manager’s boss told her he believed in her and let her handle a large event. That belief boosted her confidence that she could take on the new challenge successfully.

Several managers reiterated that their boss’s emotional support and confidence in their ability to succeed helped raise their self-confidence. A director of housekeeping relied on support and advice from the director of operations when dealing with an upset guest for the first time. The director of operation’s explanations and expectations gave her a clear understanding, giving her much more self-confidence when dealing with unhappy customers in the future. A general manager of a luxury hotel feeds off the high level of success and confidence from his senior corporate managers, boosting his own confidence since they believe in him. President Theodore Roosevelt reiterated this attribute: believe you can and you’re halfway there.

The fifth pattern that emerged from the research is that learning from failure developed self-confidence. James Burke, former CEO of Johnson & Johnson, fiercely believes you can’t build a business without making mistakes. Earlier in his career, he was once congratulated by the Chairman of the Board for the failure of a business line. Burke recalled the advice from Mr. Johnson, “Business is all about making decisions. You don’t make decisions without making mistakes. I just want to congratulate for that mistake. Don’t ever make that mistake again, but please make sure you make other mistakes.” Burke took that lesson to heart and taught it to those who worked for him.

Many of the hospitality professionals interviewed openly discussed their mistakes and how they learned from their failures. This factor was specifically mentioned by almost two-thirds of the interviewees. Learning from their mistakes and overcoming their failures were important building blocks for increasing self-confidence and enabling future successes. An entrepreneur learned to carefully check invoices and pay attention to details, after he was once fired for not balancing invoices. A restaurant GM’s career accelerated when he learned to own his mistakes instead of fearing them; in the process he also lost his arrogance. One room’s division manager talked about how second-guessing his decisions caused his employees to not follow him. By following Burke’s mantra of making decisions, right or wrong, and moving forward, he would learn from the results and become a better leader.

Almost every industry professional offered advice for the graduating seniors starting their hospitality careers. Here is a sampling of their advice:

Many students were unsure of undertaking this task—perhaps due to their lack of self-confidence in interviewing hospitality leaders. However, the overwhelming response after the task was successfully completed was that it was a worthwhile exercise. Reflecting on the assignment and the lessons from meeting with their interviewees, every student offered their own insights. Several revealed a better understanding of the importance of self-confidence in the hospitality industry. Even the illusion of self-confidence (“fake it ’til you make it”) is important for employees and customers to believe in you until you have real confidence to believe in yourself; the corollary to that is it is okay to have self-doubt as long as you keep trying new ventures. Working with others, setting goals and “level-five leadership” (Jim Collins’ research illustrating the combination of humility and fierce resolve among effective leaders) were additional concepts that emerged. Making mistakes, admitting failure, and using those experiences going forward were also themes many students highlighted. Although there were many more observations and personal reflections, a final important point students mentioned was that to be effective leaders themselves, it was important to build self-confidence for their subordinates, passing on their own experience and lessons to their staff. 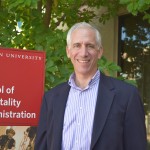 Michael Oshins is Associate Professor of the Practice of Leadership in the School of Hospitality Administration at Boston University. He is former Vice President of Integer Dynamics, a hospitality consulting firm focused on operational productivity and technology. He holds a doctorate in human resource education from Boston University and a master’s degree in hotel administration from Cornell University. Email: moshins@bu.edu