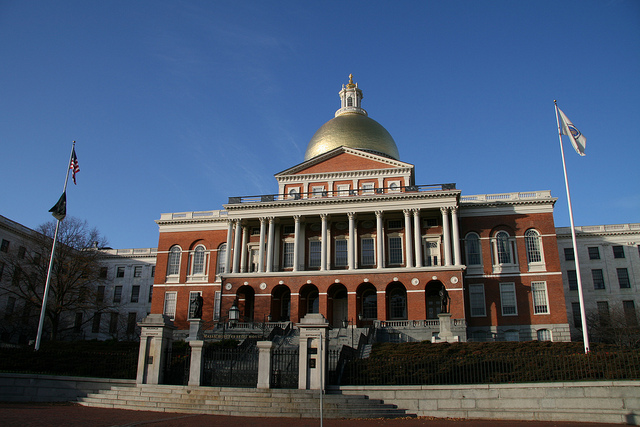 The impact of politics upon the hospitality and tourism sector is dramatic. Almost unlimited are the ways in which governments influence the delivery of hospitality and tourism products, whether through regulation of commerce, business and real estate development initiatives, cultural and historic preservation strategies, and taxation policies. Governments may also be involved in spending public funds on the promotion of attractions that are privately owned and operated. Legislators establish accommodation taxes to fund these marketing initiatives, and bureaucrats pick winners and losers by selecting the specific tourism assets and destinations they will promote.

Business success is directly affected by political decisions that influence the environments – economic, ecological, and social – under which hospitality and tourism functions. This raises the issue of whether the sector and its interests are well represented in the halls of government. Is there more that we, as an industry, should be doing within the political process?

Michael Hall has contended that most academic “discussion of tourism policy making has tended to concentrate on what governments should do rather than examining the manner in which decisions have actually been made.” My article is intended to offer new insight about who is making the decisions, and contributes by inference to further research about how these decisions are made.

The majority of political issues that directly influence the industry emanate at the state level. Within state legislatures, there are two key means for having the industry’s interests represented. The first is through the lobbying of legislators. Industry representatives explain to legislators and their staffs the importance of hospitality and tourism, and ensure they understand the impact of myriad bills they will consider throughout the course of any legislative session. Although this is an underexplored area that deserves future study, my commentary does not address legislative lobbying.

The second, more direct, means of affecting legislation is to elect officials from the hospitality and tourism industry. These insiders can educate and influence their legislative peers regarding the importance and vulnerabilities of the sector, introduce and champion legislation beneficial to hospitality and tourism, and alter or block legislation that may pose a threat to the industry. The purpose of this article is to determine the extent of direct political involvement by members of our industry. 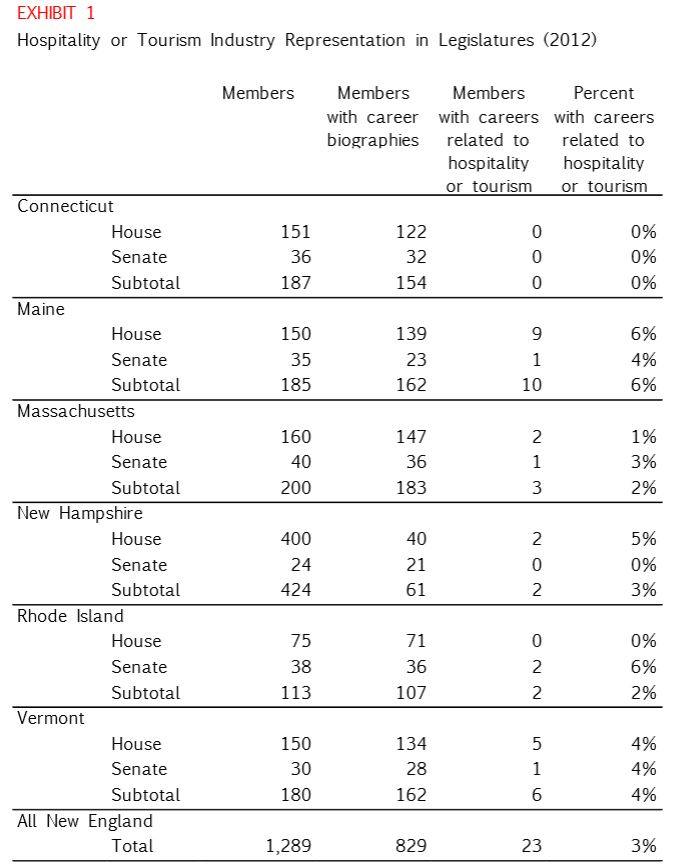 The Case of New England

The six New England states, each of which has a House of Representatives and a Senate, offer an opportunity to conduct a collective case study of industry participation in governance. These 12 legislative bodies have a combined total membership of 1,289 elected officials. Of these, 829 members provide some type of biographical statement on their websites. These profiles were reviewed to determine the proportion that mentioned current or former involvement with the hospitality and tourism industry.

As reflected in Exhibit 1, the number of New England legislators with hospitality or tourism backgrounds is minimal. This ranged from 0% in Connecticut to 6% in Maine, with an overall penetration of 3% across the region. Considering the very high importance of hospitality and tourism in New England, these results are surprisingly low. 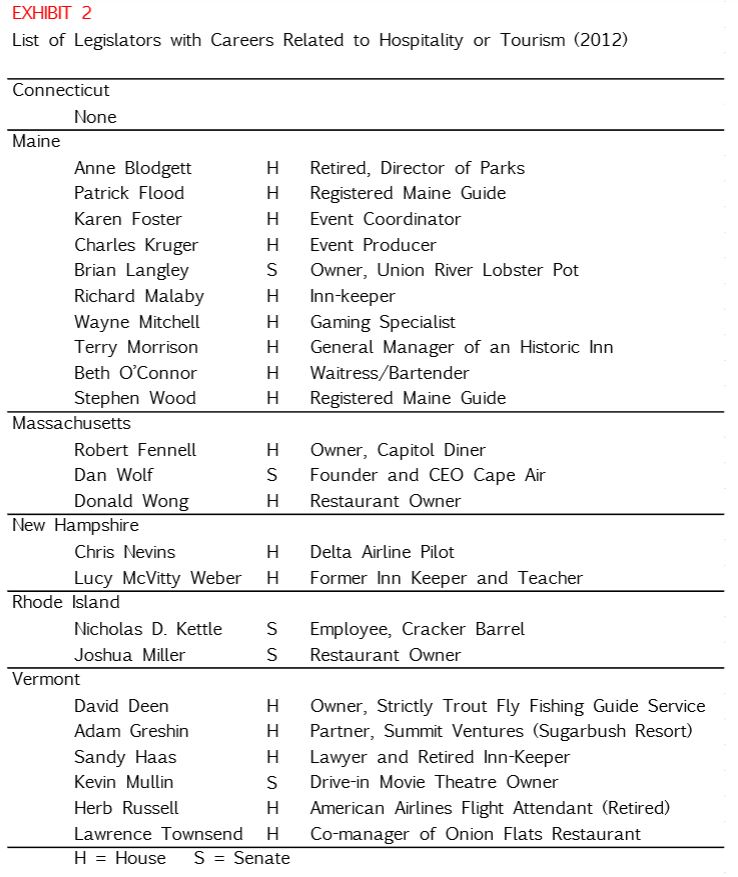 A Call for Action

An increasing number of academics throughout the world has been calling for tourism industry representatives to become more directly invested in the political system. As I urged previously – writing with colleagues John Crotts, Calvin Blackwell and Alan Styles – tourism leaders should “get involved in the process and make sure your government knows your concerns and understands your interests. Tourism industry practitioners are strongly encouraged to make sure their voices are heard loudly during the course of these arguments.”

Nancy McGehee and Fang Meng have proposed strategies to improve the image and attitudes of legislators toward tourism. Sue Beeton has argued that political “power does not solely reside with those who have the appropriate title, but usually results from the power-playing and positioning of all parties with a vested interest. It involves the actions, values, and ideologies of individuals, interest groups, public, and private organizations as actors in the ‘game’ of politics.” Anthea Wesley and Christof Pforr subsequently encouraged hospitality and tourism industry members to provide “political steering” that benefits the industry.

Hospitality and tourism are critically important to New England, but the current level of political involvement is anemic. The low representation among legislators across the six states is woefully disproportionate to the significant contributions our industry makes to employment and economic vitality within the region.

Although the results of this study cannot necessarily be extrapolated to other regions, it seems likely that the political involvement of hospitality and tourism practitioners elsewhere is similarly weak.

Given the importance of the sector to the economic vitality of almost every nation, this regional case study has global implications.

Regardless of partisan affiliation or the merits of specific pieces of legislation, it is time for hospitality and tourism leaders to become more personally involved in the process. Run for office yourself. Encourage others you know and admire to throw their hats in the political ring. The industry should have more seats at the table and a louder collective voice.

Each of the six New England states hosts a government website that provides listings of individual state representatives and state senators, with links to biographies that have been prepared and posted by the officials themselves. A large majority of these officials have posted extensive biographical sketches, with the exception of those in the State of New Hampshire, where relatively few officials shared their personal information. All available biographies were reviewed in detail, to identify individuals who had been involved in some significant way with the hospitality and tourism industry. A broad view was taken in making this determination, based on relevant keywords and interpretation by the author. The project also included a review of prior academic literature related to this topic