The BU Center for the Study of Asia

and a conversation with its director, Lydia Chen, and discussant Shelley Hawks 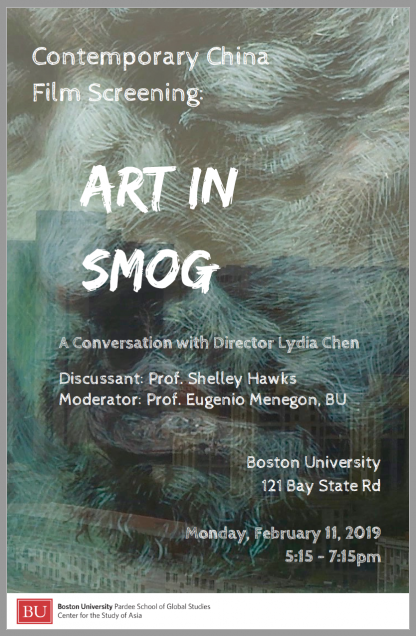 Directed by Lydia Chen, Art in Smog offers an intimate encounter with four artists and a curator in China, as they pursue their dreams over 25 years of rapid change. The pursuit of art takes them from quiet lives in the 1990s to the extremes of the 2000s to their different paths forward today. Their lives and their work provide a visually rich glimpse of humanity in a tumultuous society.

Lydia Chen has engaged in cultural exchanges between China and the United States since the 1980s. At first she worked for the Foreign Languages Press and studied Chinese painting at the Central Academy of Fine Arts in Beijing. Later she was communications director for the American Chamber of Commerce in China, associate director of the Center for East Asian Studies at Stanford University, and executive director of the Fairbank Center for Chinese Studies at Harvard University. She received her master’s degrees in journalism and Asian studies from the University of California at Berkeley and her B.A. from Sarah Lawrence College.

Shelley Drake Hawks interviewed Chinese painters for her 2017 book The Art of Resistance: Painting by Candlelight in Mao’s China and her accompanying film The Lotus and the Red Star. She currently teaches art history at Middlesex Community College. She has also taught at Mount Holyoke College, Boston University, UMASS-Boston, and Rhode Island School of Design. She earned her M.A. at Harvard in Regional Studies: East Asia and her doctorate in history from Brown University. To learn more about her book or view her film, visit http://arthistorypi.org/books/art-of-resistance 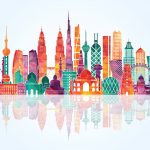 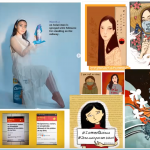 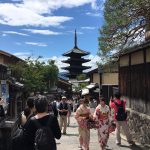