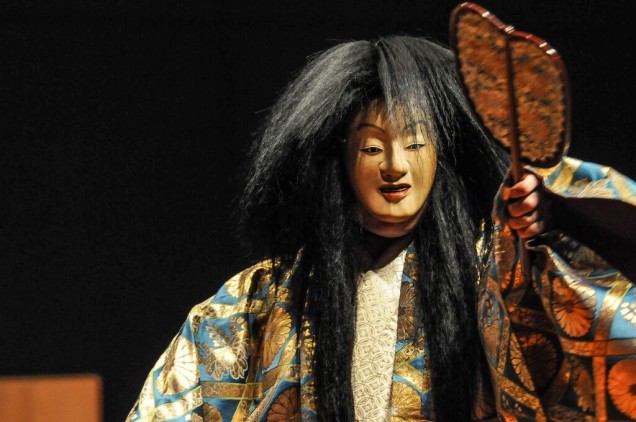 The BU Arts Initiative-Office of the Provost, the Women’s, Gender, & Sexuality Studies Program, the Center for the Study of Asia, and the CAS Department of English will host a five-day residency with Theatre Nohgaku.

Schedule of Events
(All events listed below are free of charge)

Check out our longer video for more information: Making of Zahdi Dates & Poppies.

About the Plays
Zahdi Dates and Poppies (World Premiere) is a contemporary, masked, lyric, dance piece written by Carrie Preston, scored by David Crandall, and directed by Jubilith Moore in the noh style. This moving work adapts the poetic, musical, and performance styles of the ancient Japanese noh theater to explore a timeless concern: the impact of war on those who do the killing and their families. A US Marine fighter pilot is haunted by an insurgent he killed on a bombing raid in Zaidon, Iraq—a raid that also saved the life of a fellow Marine marksman. The pilot’s wife, despite her own deep antipathy to war, tries to support him as he struggles with the nightmares of combat trauma. Appearing in the pilot’s dreams, the ghost of the Iraqi insurgent mourns the loss of his life and the companionship of his own wife before achieving the release of forgiveness. While based on noh performance techniques, Zahdi Dates and Poppies expands the traditional idiom with flexible structure, innovative mask, costume and lighting design, and modified music and choreography that create a one-of-a-kind theatrical experience. Zahdi Dates and Poppies was developed with significant support from the Ko Festival.

Sumida River is an English-language translation and performance adaptation of Sumidagawa, one of the most popular and affecting pieces in the traditional noh repertory. Adapted and directed by Theatre Nohgaku’s Artistic Director Richard Emmert, it explores the deep bond between mother and child and the tragedy of loss. A ferryman on the Sumida River is about to take a traveler across, but they decide to wait for a madwoman following close behind. The woman arrives and tells how she is looking for her son who has been taken by slave traders. As they cross, they notice a crowd on the opposite bank conducting a Buddhist memorial service. The ferryman tells how a boy died a year earlier after having been left behind by slave traders. The woman realizes that the boy was her own son. The ferryman takes her to the grave. When she begins to recite prayers, the boy’s voice is heard from inside the grave. His ghost then appears to her but when she reaches out to touch him, he slips back into the grave and disappears, leaving only “sadness and sorrow.” This production features the main character in full noh costume and mask, and closely follows traditional performance practice to provide English-speaking audiences with an accessible glimpse into the world of noh, a stage art that has been continuously performed for more than 650 years.

Check out the full biographies of all our visiting artists with Theatre Nohgaku.

What Workshop Participants Have Said …
“…the discipline, density, meditative energy, and meta-human passions of the form and tradition are tremendously alluring. Writing under the influence of noh, schooled by it, magnifies possibilities. … Noh’s use of space and time is in perfect accord with experiment in the field. This research supports adventure at the vanguard.” –  Erik Ehn, playwright at New Dramatists, Chair of Playwriting, Brown University

Press
“PAGODA is a triumph. To have created a new Noh play but retained total authenticity is nothing short of brilliant. It is something that devotees of Noh will savour.” – Liz Arratoon. The State (London)

What Audiences and Presenters Have Said …
“…the opportunity to experience traditional Japanese theater is a real treat.”