Hostile Terrain 94 (HT94) is a participatory art exhibition organized by the Undocumented Migration Project (UMP), and brought to Boston University by the College of Arts & Sciences and the BU Arts Initiative, with support from Latin American Studies, the College of General Studies, BU History Department, BU Archaeology Department, and the BU Hub. The exhibition illuminates the humanitarian crisis occurring at the United States’ border, a crisis that has claimed over 3,200 lives since the 1990s and continues to do so each and every day.

Upcoming Events: Check out installation information and affiliated programming throughout the semester.

In 1994 the United States Border Patrol launched the immigration enforcement strategy known as “Prevention Through Deterrence (PTD).” As a result of heightened security measures at urban points of entry, undocumented migrants were funneled through extremely treacherous environments, land dubbed as “Hostile Terrain” by U.S. Border Patrol. PTD failed to deter border crossers and, instead, more than six million people have attempted to migrate through the Sonoran Desert of Southern Arizona since the 1990s. Over 3,200 people have died, largely from dehydration and hyperthermia, while attempting this journey through Arizona. PTD is still the primary border enforcement strategy being used on the U.S./Mexico border today. 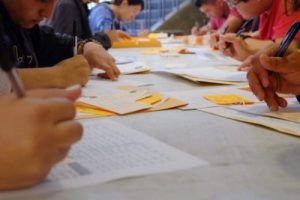 September 3 through December – Installation
Boston University is pleased to bring the Hostile Terrain 94 installation to campus (on the 2nd floor landing of the George Sherman Union). The human toll of the “Prevention Through Deterrence” policy is commemorated through the installation of over 3,200 toe-tags listing the names or other identifying information as well as the location of the corpses of migrants found in these borderlands. These tags are placed on an enlarged wall map of the desert showing the exact locations where the remains were found.

Students and BU community members can participate in assembling the installation and presenting it to peers as a means of generating campus discussion regarding US migration policies, border enforcement, and how factors such as nationhood, ethnicity, and class impact our collective sense of community and belonging. Anyone from the BU Community can participate in the construction of this installation on the landing on the second floor of the George Sherman Union. You must sign up for a time slot, and you must be able to show your symptom status and follow safety protocols. We will provide gloves and sanitizer. Please provide your own mask.

Through September 16 – HUB CC 199: Hostile Terrain 94: Immigration, Politics, and Activism Through the Arts
BU students can register for this cocurricular through Student Link until September 16th.

Thursday, September 24 at 4:00 PM (EDT) – BORDER SOUTH Film Screening
Free with Registration – BU Only: Register
To stem the immigration tide, Mexico and the U.S. collaborate to crack down on migrants, forcing them into ever more dangerous territory. Border South reveals the immigrants’ resilience, ingenuity, and humor as it exposes a global migration system that renders human beings invisible in life as well as death.

Wednesday, November 18 at 4:00 PM (EST) – Greater Boston Youth Organizers Reflect on Hostile Terrain 94: a Discussion of Border Violence and Activism
Free with Registration: Register
Presented in partnership with Empowerment League (EL), one of many programs run through Boston University’s Community Service Center, this panel will consist of local youth who actively work and organize around immigration justice in the Greater Boston Area. The discussion will consist of their reflections on the themes of Hostile Terrain 94: an art exhibit on the violence of border enforcement at the US-Mexico border, as well as information about the work they do and how BU students should get involved.