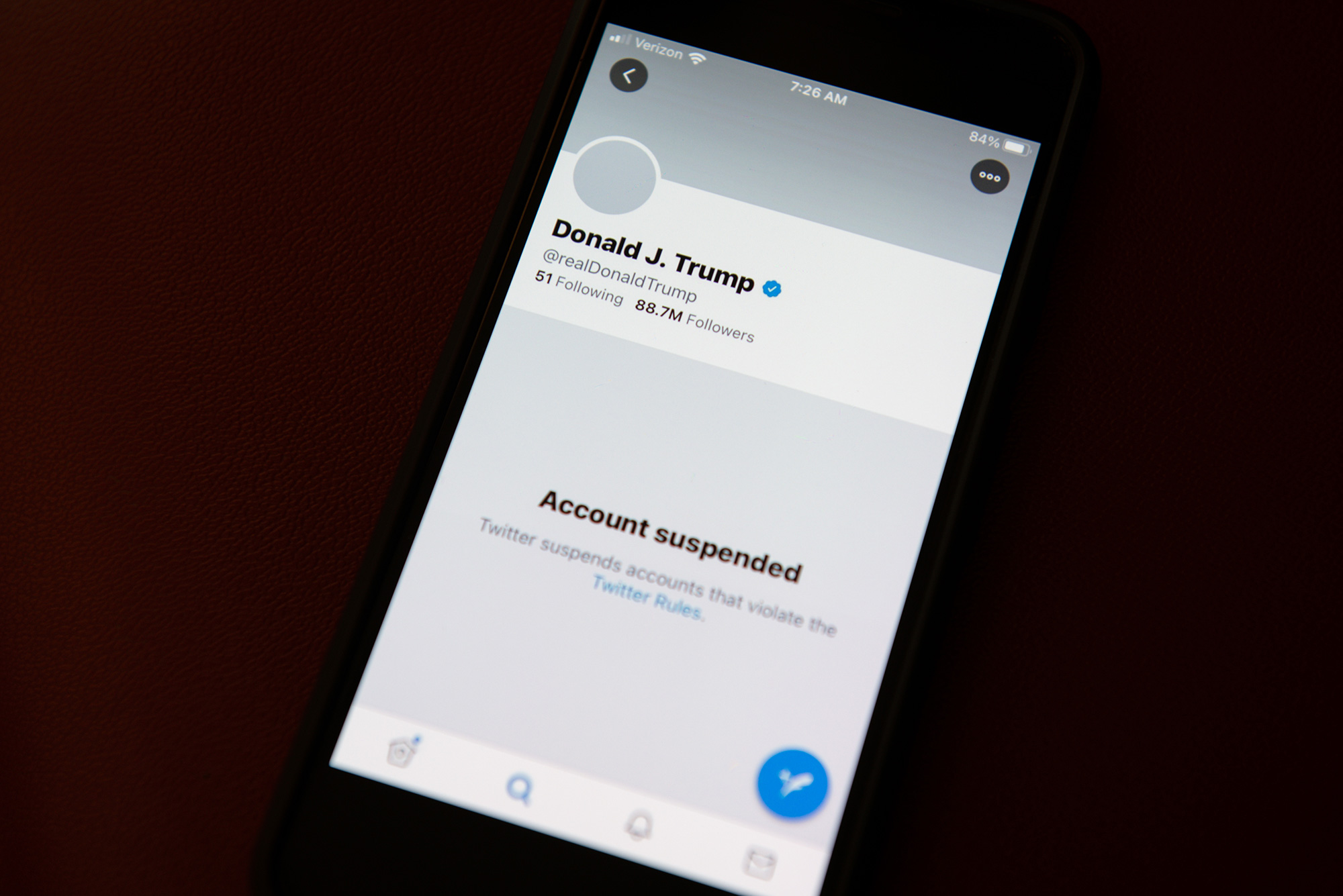 Donald Trump’s nonstop tweeting will finally stop, after Twitter banned him for life for allegedly inciting the January 6 siege of the US Capitol, which resulted in five deaths. Photo by Graeme Sloan/Bloomberg via Getty Images

Break Up Twitter? Or Ban Trump? Where Does Social Media Go from Here?

This is not an issue of the First Amendment, says BU’s T. Barton Carter

BU Today: People have accused social media companies and Simon & Schuster of stifling free speech. Is that what they are doing when they ban certain users or, in the case of Simon & Schuster, cancel Hawley’s book deal?

T. Barton Carter: You can argue they’re stifling some free speech, because they’re preventing it from being disseminated. But that’s a right they have. The First Amendment only limits the government’s right to restrict speech. It starts off, “Congress shall make no law…” Through the 14th Amendment, that has been extended to apply to state and local government. But it does not apply to private companies. In fact, private companies have First Amendment rights and, you could argue, could not be prevented from deciding who gets to speak on their system or not.

BU Today: Most people would say social media companies have a positive, socially redeeming mission in terms of bringing people together and sharing information. But how do you counter the negative effects—disinformation and incitement based on disinformation?

T. Barton Carter: Part of the First Amendment is that, sometimes, you have to take bad speech with good. We don’t want the government getting to decide whose speech is good speech. It’s hard to draw the cause and effect of what happened at the Capitol to specific speech. Certainly, the government can limit or punish incitement, which is “advocacy directed to inciting or producing imminent lawless action and likely to produce such action.”

People want to have Trump prosecuted for his speech [before the riot]. They have to prove incitement, or his speech is protected by the First Amendment. That would be very, very difficult to prove. If he had said, “Okay, swarm the Capitol right now,” clearly, that’s incitement. But excessive rhetoric—people have a right to protest. They didn’t have a right to do what they did, and they can be charged with those crimes. But in trying to convict somebody on the grounds of what they said, it’s a very tough standard.

BU Today: A law professor quoted by the Washington Post agreed that while the First Amendment applies to government, we should be worried about powerful corporations like Twitter and Facebook making decisions about speech. Do we need a new law or a First Amendment revision for this 21st-century world?

T. Barton Carter: I agree completely we need to be worried. Somebody suggested you [should] try and use antitrust law to limit their power in that area. The real issue is the concentration [of power].

BU Today: What’s the balance between making sure discussion is civil, non-incendiary and not trafficking in lies, and ensuring that it’s robustly diverse?

T. Barton Carter: “Civil and non-incendiary”: where’s the line on that? The First Amendment has been held in many cases to protect falsehoods. If you’re a public figure, you can only recover for a defamatory falsehood if you can prove actual malice, which is knowledge of falsity or “reckless disregard” of whether it was false. A large number of defamatory falsehoods are protected by the First Amendment.

BU Today: What advice might you give to some of these companies grappling with issues of free speech?

T. Barton Carter: That’s a difficult question. Can you rely on anybody to make the right decision on what speech should be allowed and what speech shouldn’t? We all have different ideas, and that’s why we have such a robust protection for speech. I find Trump’s speech incredibly offensive and have no great desire to have it disseminated. But you have to think about precedent: whose speech is next? Who else’s speech gets limited and for what reasons?

BU Today: Would you have done what these social media execs did?

T. Barton Carter: As a practical matter, yes, because of public pressure. There is no First Amendment issue for them. These companies are taking a concern maybe as much for business reasons as anything else. If they didn’t do something, Congress seems somewhat interested in restricting their ability to avoid liability.

Break Up Twitter? Or Ban Trump? Where Does Social Media Go from Here?

There are 13 comments on Break Up Twitter? Or Ban Trump? Where Does Social Media Go from Here?