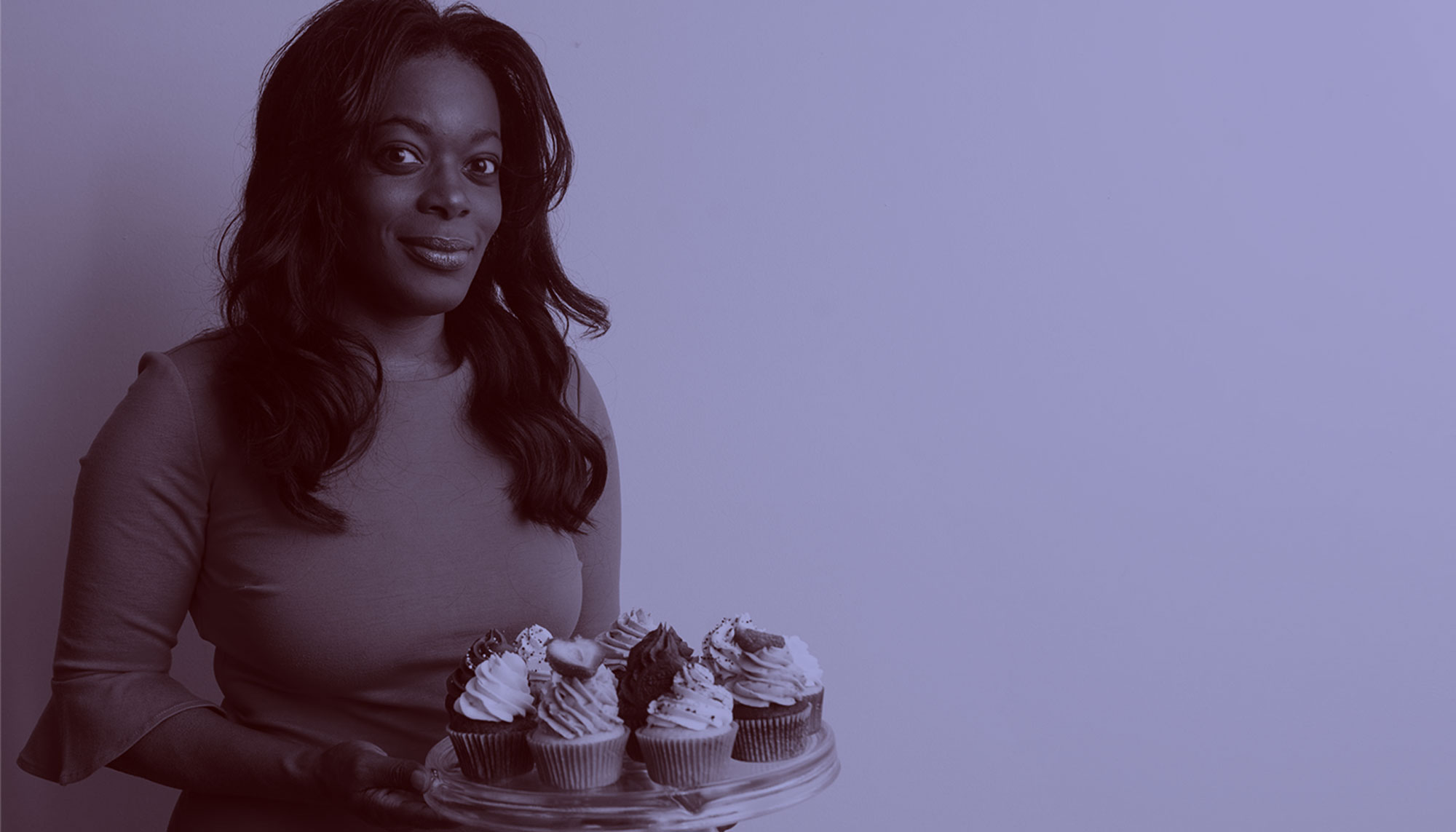 In addition to running CauseEDU, Shironda White (Questrom’18) also heads Cupcake Therapy, an allergy-friendly baking company that sprung from her own struggles with food allergies. “I just wanted to eat and not die!” she says. Photo by Cydney Scott

Shironda White (Questrom’18) on how Questrom helped her start CauseEDU

By her estimate, Shironda White got about three hours of sleep a night while she was at Boston University. “I would not necessarily recommend being a full-time entrepreneur, full-time student, and graduate assistant,” White (Questrom’18) says, laughing.

What was keeping her awake? Building out CauseEDU, a college crowdfunding platform turned financial planning destination for students and families, on top of getting her MBA in social impact from the Questrom School of Business. White would take the skills and lessons she was learning from her Questrom classes and apply them to her start-up in real time: “I said, ‘Okay, I’m in business school, let me figure this out,’” she says.

After almost three years of crowdfunding, CauseEDU launched its financial planning services in March 2020. However, that wasn’t the only venture White began in 2020: she also started Cupcake Therapy, a nut-free and allergy-friendly baking company (an “accident,” she calls it, but a happy one nonetheless). “People told me I couldn’t do two companies at one time, that I’d be a jack-of-all-trades and a master of none,” White says. “It’s really easy to listen to other people, and get discouraged. But you know what? Not everybody’s going to see your vision—and that’s okay.”

White recently talked with Bostonia about how she started both of her businesses.

Bostonia: How will CauseEDU make my life better? Give us the sales pitch.

White: We’re working to democratize the college financial planning process. The way that it works now doesn’t make any sense: this is literally one of the biggest financial decisions you will ever make in your life, but you’re having to make it at 16 and 17 years old. And then you’re stuck with it forever.

What we do is we provide students and their families with a platform that has a suite of services. We bring together financial advisors, financial aid consultants, and college admissions counselors, and we charge families a flat annual fee, $99 or $199, depending on which program they choose. For that one fee, we help families determine the true cost of their desired college experience—the estimates on college websites are usually off by several thousand dollars—and help them find strategies to pay for it. We streamline the process, we make it less expensive to plan, and on average, we help families save $10,000 on the cost of a college education.

Where did you get the idea for it?

I met my cofounder (who’s since left the company) at Spelman College in the mid-90s. A few years ago, she was helping students raise money to stay in school through GoFundMe, and I started helping her out. After a summer 2017 internship at the Bill & Melinda Gates Foundation, I approached her and said, “Let’s turn this into a business.” So that’s how it started—as a crowdfunding platform for students going to college.

There’s this quote by Desmond Tutu where he says, “There comes a point where we need to stop just pulling people out of the river. We need to go upstream and find out why they’re falling in.” When we were raising money for students, prospective donors would ask, “How do you get to college and then say, ‘Oh, oops, I need more money?’” What we found was that students primarily fall into two categories: the first is “life happens,” where you get to college and someone loses a job, and suddenly your financial situation is different than when you started. The other, larger, segment of students are those who didn’t understand how much college actually costs until they got there. The average American family can’t afford a $500 emergency. So imagine getting to college and finding out you owe $3,000 more than you thought—and it just snowballs because tuition and fees increase every year. So we decided to address that. GoFundMe was pulling students out of the river, but the financial education was finding out why they were falling in.

What skills did you acquire that allowed you to launch both of your businesses?

I learn by physically doing and figuring things out myself. My response to pretty much everything was “let me Google it.” When we were starting out with CauseEDU, my cofounder was working and I was in business school at BU. I took the Starting New Ventures class during the second year of my Questrom MBA, did all this research, and figured everything out from a budget perspective. My dad asked me how much money I needed to get started—he’s an entrepreneur, too, so he was like, “Go for it!”—and wrote me a check for $10,000. When we pivoted to financial education I looked closely at Tiffany Aliche, a finance guru whose nickname is The Budgetnista. I looked at how her platform worked, and found out she used Thinkific—so that’s where I built our new platform. I’m able to figure things out.

With cupcakes, that was an accident! That was not supposed to happen. I love to bake—I’m a foodie—but I have a lot of allergies. I’ve had a few mishaps with bakeries in the Boston area where I’ve had to use my EpiPen. So I just started baking cupcakes for myself, and people kept asking, “Can you bake for me?” After a while I put up a website, thinking, “If people order that’s fine, but if they don’t, that’s fine, too,” and it took off. The orders just kept coming in. I had to bring in another person to help, and we’re bringing in more soon. So now we have an actual business baking cupcakes! That was never the plan—I just wanted to eat and not die.

What advice would you give, then, for someone who wants to launch their own business?

First, learn all the rules, and then, know which ones you can break. People say that you should never, ever work with friends, family members, or anyone you’re in a relationship with, right? When I started CauseEDU, our marketing person was my brother, the cofounder and CEO was someone I’ve known since 1996, and our CTO was an ex-boyfriend who became a friend. So I broke all of those rules, and you know what? It worked out.

Also, people will make a lot of assumptions. Someone will see me, a Black woman, and they automatically assume that CauseEDU only works with low-income and minority students. And I’m like, “Where did you get that assumption from?” I had to learn to name that and say, “That’s a wrong assumption; here’s what it really is,” because if you don’t, someone will leave with that assumption. People will try to pigeonhole you, and try to tell you what you can and can’t do. But it’s not up to them. It’s just not.

My Big Idea(s): Financial Planning for Students and Families—and Cupcakes

My Big Idea(s): Financial Planning for Students and Families—and Cupcakes
My Big Idea
0
share this