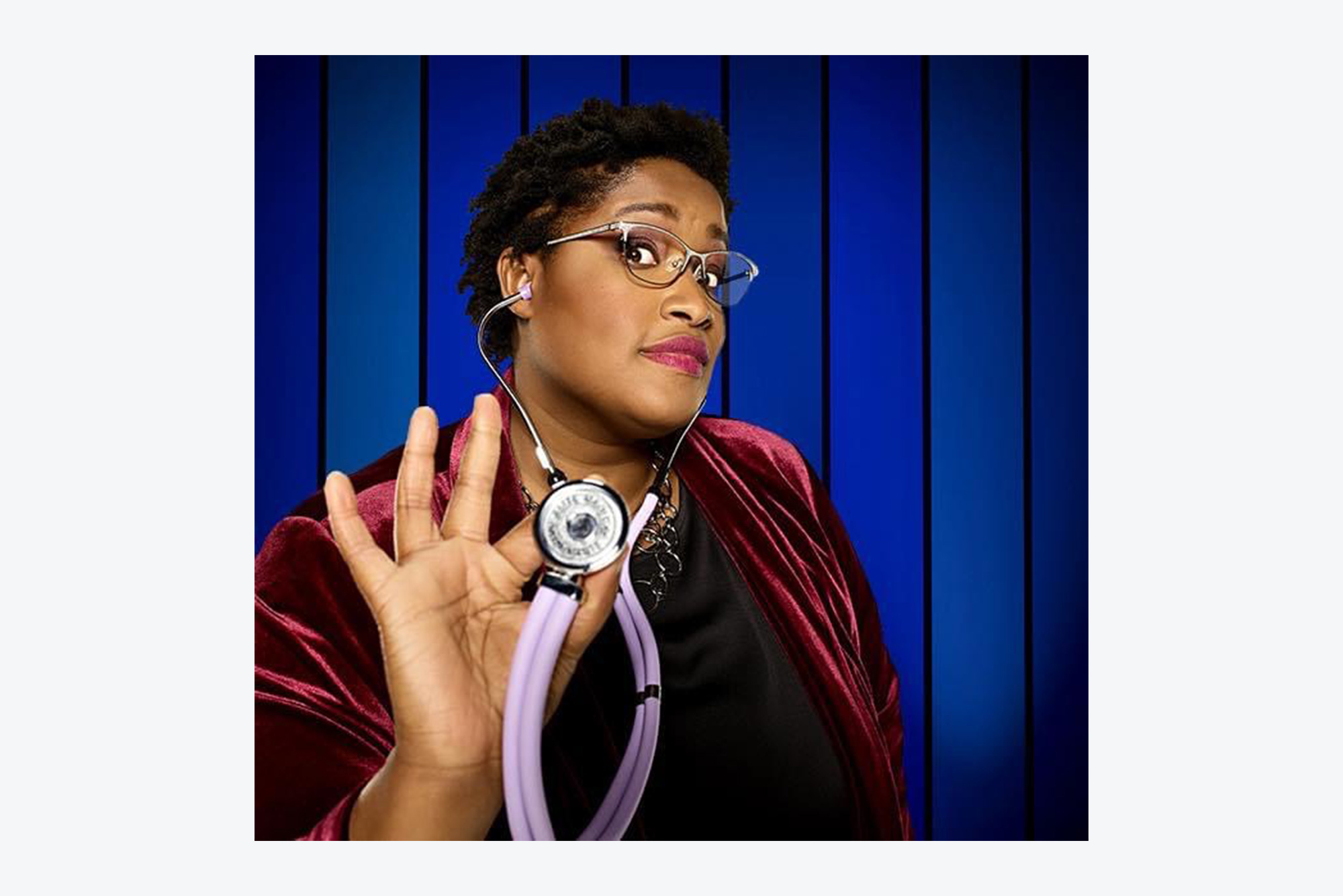 She’s the lady with all the answers: LaKedra Pam, a School of Medicine assistant professor of obstetrics and gynecology, has made a side career out of her passion for trivia. These days, she stars on the Game Show Network’s Master Minds. Photo courtesy of the Game Show Network

“My family is much more excited about my game show life than my OB/GYN life,” says LaKedra Pam, a School of Medicine assistant professor who moonlights as a game show contestant and personality. “They don’t get to see me do C-sections, but seeing me on TV is really exciting for them!” Pam is currently a cast member of the Game Show Network series Master Minds, where challengers compete to win $10,000 by out-knowing each other and resident experts like Pam and Ken Jennings (best known for amassing more than $4.5 million from his appearances on Jeopardy!).

And speaking of Jennings: this isn’t Pam’s first trivia rodeo. She is also a two-time Jeopardy! champ—she appeared on three episodes in December 2017, took home just under $35,000 (“I bought a car!” she says), and had the honor of being deemed a “trivia buzzsaw” by the late, great Alex Trebek. Her Jeopardy! wins are what led her to this latest show: as a Jeopardy! alum, she became involved in the alumni community’s trivia conventions and competitions, where she eventually caught the eye of Master Minds producers.

Pam officially joined the show as one of its “master minds” in early 2020, a role she stepped into with gusto. On an episode that aired this past February, she was steely during the show’s prerequisite smack-talk. “I am ready to dominate,” she said, staring down the three challengers. Master minds and challengers go head-to-head for three rounds, with the one scoring lowest on each side being eliminated until it’s one-on-one. If a challenger defeats any of the master minds three times, that person joins the experts panel, potentially knocking one of the master minds off the show.

Not that it’s happened yet, of course—the experts are, naturally, crazy smart. They rattle off factual anecdotes after questions, including a recent mini-monologue from Pam about how house cats (no, really!) are the biggest killers of birds every year.

So she wasn’t fazed by the threat of competition. “Highly unlikely, Brooke,” she told host Brooke Burns, after Burns explained the consequences of losing to a challenger. She shook her head: “I don’t think so.”

That’s because trivia has always been Pam’s thing. Growing up in Louisiana, she watched Jeopardy! every afternoon with her parents. As she told Trebek during one of her contestant interviews, when she was just five or six, she asked her dad how she could one day get on Jeopardy! His advice? Try to learn three new things a day. It was a challenge she accepted.

“I’ve always had a curiosity about random things, and in addition to that, I’ve always been a massive reader—I would read the encyclopedia or the World Almanac for fun,” Pam explains. “My brain is the type that’s wired to hold onto nuggets of information, and in general I’m really good at remembering things I’ve read or seen somewhere.”

It’s a skill that comes in handy as an OB/GYN at Boston Medical Center and as a MED faculty member. “I teach the essentials of care in the clinic, the delivery room, in the operating room, and so on,” she says. She also recently became the clerkship director for her speciality, which means she’s in charge of the third-year OB/GYN student rotation.

Obstetrics wasn’t always her plan, however—Pam initially thought she’d go into pediatrics. An obstetrics residency at Northwestern University’s teaching hospital changed that: “I didn’t have that a-ha! moment during my pediatrics rotation, but I had it just about every single day of my OB/GYN residency,” she recalls. “It was over for any other specialty after that.”

Once a year she takes a break from BMC and MED and heads to Los Angeles to film Master Minds. She’s there for about a week at a time. The shooting schedule is grueling, with as many as six episodes filmed in a single day. (“It’s nothing I’m not already used to as an obstetrician, but when I go out to California to tape, it’s no vacation,” she says.) Despite the 10-hour days, it’s less stressful than her Jeopardy! shoots—“There’s not nearly as much pressure involved,” Pam explains. “If I’m not the last master mind standing at the end of a game, I don’t consider that ‘losing’ the same way one would if I were trying to win money.”

So, what’s next for Pam? Her own trivia spin-off? A memoir about her double life? For someone who generally has all the answers, she’s noticeably mum on the topic. What she can say for sure is that she’s enjoying the ride: “I consider myself an obstetrician first and foremost, but I am really grateful that I’ve gotten the opportunity to turn my hobby into something as unique as being a regular on a TV show!”