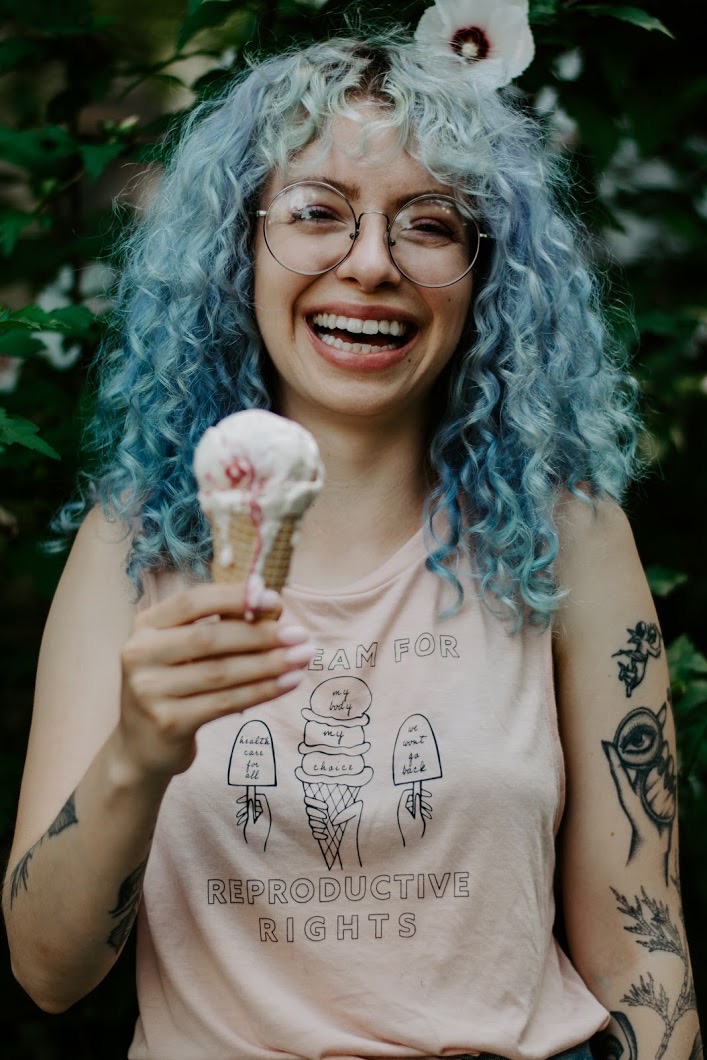 “I like to focus on lesser-known history—history that is about, or inspired by, marginalized people, like women,” says A Sweet History creator Hannah Spiegelman (MET’20). “If I do a recipe on a more well-known person, I look at the person or the event from a different angle. I try to pull out what people don’t know or break down assumptions.” Photo by Sarah Hummel

Alice Clement was one of the first female detectives tasked with patrolling Chicago in the early 20th century. Among her arrests was a female restaurateur who created a scene when her employees wouldn’t sell her tamales. The media soon became enamored of Clement and reported that the German-American mother of three made dill pickles in her spare time.

So when recent gastronomy alum Hannah Spiegelman set out to create an ice cream inspired by the late, great Clement, she dreamed up a spicy concoction (a nod to the tamales) with dill-pickled purple berries folded in. She topped it off with a beet ice cream cone.

Melding ice cream and history is what Spiegelman (MET’20) does on her blog A Sweet History. She writes about little-known historical figures, mythology, art history, and historic events, then uses these stories as inspiration to create a corresponding ice cream flavor, which she documents in tantalizing photographs (ingredients are posted with the photos).

“I like to focus on lesser-known history—history that is about, or inspired by, marginalized people, like women,” says Spiegelman, who got the idea from a former boss who knew her culinary and research passions, and she started working on it two years after graduating from Goucher College with a history degree in 2015. “If I do a recipe on a more well-known person, I look at the person or the event from a different angle. I try to pull out what people don’t know or break down assumptions.”

Her blog post on Catherine of Aragon, the first wife of King Henry VIII, for instance, describes the backstory of a badass who defended a women’s right to education. Even fans of Tudor history may not know that Catherine was the first female ambassador in European history, and that when Scotland invaded England, she joined the English soldiers on horseback and in full armor. To pay homage, Spiegelman dreamed up an ivy ice cream with clementine cava cookies and a pomegranate spun sugar crown, no doubt a nod to Catherine’s Spanish heritage.

Since launching, A Sweet History has been featured in Gastro Obscura and on National Public Radio, and Spiegelman has been asked to lead workshops and curate a few pop-up museum exhibitions. She has created about 130 recipes to date for the blog, she estimates.

Her first flavor was inspired by James Hemings, a chef and former slave of Thomas Jefferson, whose recipe for a meringue-like dish called Snow Eggs was discovered at Monticello by historians. Spiegelman’s adaptation is a custard ice cream with rose water meringue. A more recent creation, concocted to accompany her blog post on the Wampanoag Native American tribe, is a recipe for sassafras squash ice cream with sassamanesh (cranberry) syrup. Spiegelman’s post goes into detail about the history of sassafras, saying the tree’s wood was used to make tools, while its bark and root were used medicinally. The British soon began to export it back home, with a root selling for over $25,000 in today’s currency.

To create a flavor, Spiegelman first finds the historical event or bit of mythology she wants to explore. These are often stories she is already familiar with, or ideas from other people (she takes commissions on flavors and can ship across the country). She then pulls out little details she thinks would best translate into a flavor or an ingredient. Her ingredient list for the backstory of George R. R. Martin’s Game of Thrones series: iced blueberry crème ice cream and a hot beet honey syrup, a creative combination that brings in the themes of fire and ice.

After gathering her ingredients, some of which she buys from spice shops and specialty food stores near her Brooklyn, N.Y., home, Spiegelman makes the ice cream in her Rebel Smart Scoop compressor ice cream maker. While the research and writing vary in length, it takes her about a day to create an ice cream flavor. She says a common mistake when making ice cream is not thinking of it as a science, “not realizing there’s a reason that you have sugar and ice and fat. All of those things work together to create the ice cream.”

While applying to PhD programs in the history of design and material culture, Spiegelman supports herself by working part-time for a toy company, babysitting, and running a fundraiser through Patreon, a crowdfunding site that grants donors access (for $5 a month) to special recipes.

Ideally, she says, she’d love to find a job working with ice cream and continue researching, writing, and inspiring others to learn.

“I’m interested in experimenting with flavor, and ice cream makes a great blank canvas,” says Spiegelman, who moved to New York after finishing the BU Gastronomy Program in September. “And with history, I feel like everybody can find something interesting if they just look at something from a different angle or take the time to learn about it, and that way it’s not such a distant, foreign concept.”