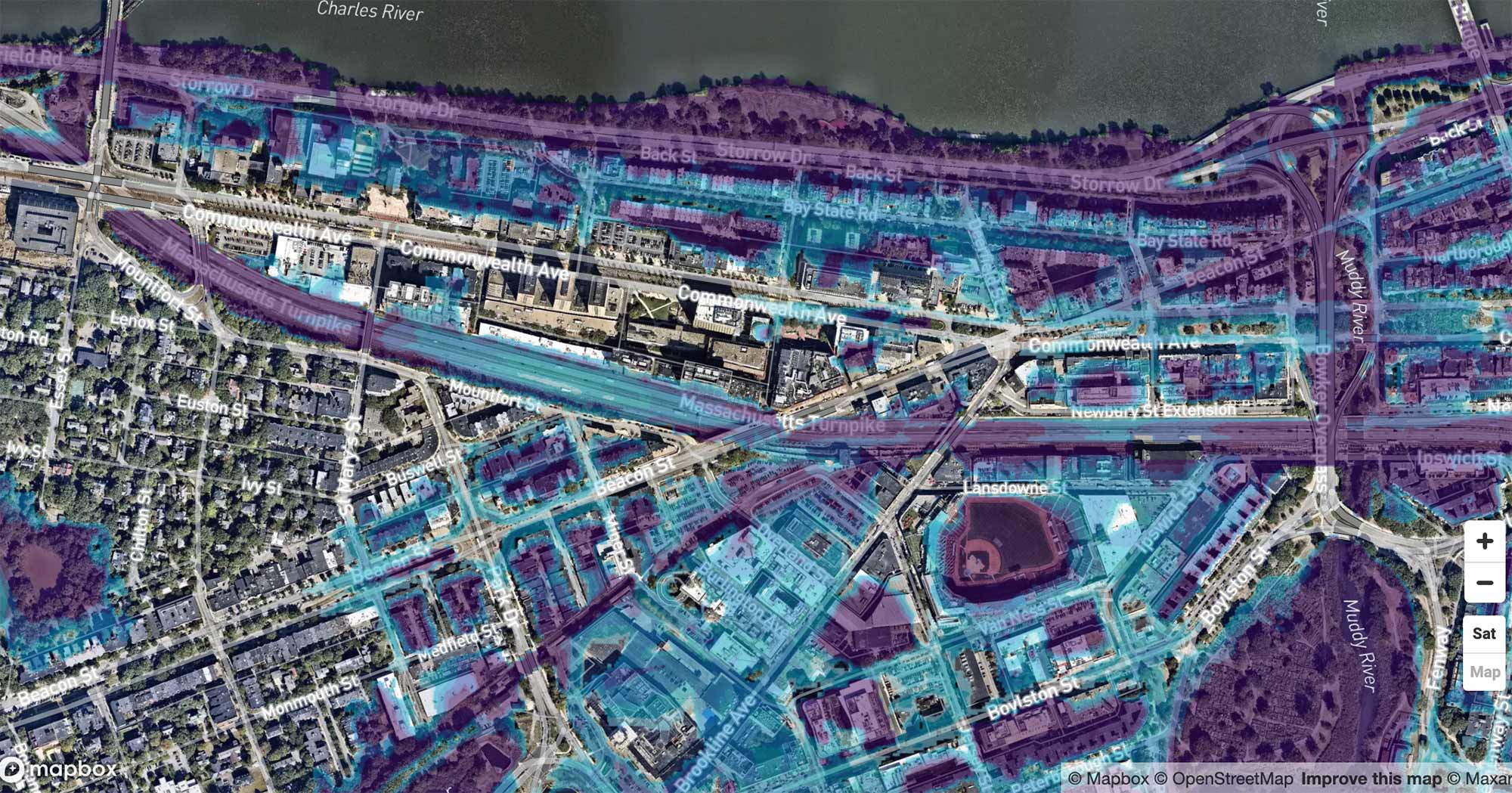 The colored sections of the map above show portions of the Charles River Campus that could be flooded in 30 years, according to a new report that has grimmer predictions than federal flood models. Map courtesy of First Street Foundation

Will BU Be Underwater in 30 Years?

Will the BU Class of 2050 be forced to paddle to some classes in wetsuits? You’d think so after reading data suggesting that parts of BU’s campuses are likely to face greater-than-expected flooding in 30 years due to climate change. First Street Foundation, a New York-based nonprofit research and technology group, says that nearly twice as many properties across the United States as the government currently projects are at risk of being underwater by then. The extreme weather events and storm surges from rising sea levels caused by climate change will be the culprits, says the group.

The report assembles data and maps for addresses around the nation. Its map for BU are included, along with University experts’ answers to three questions about our flood future.

BU Today: What locations on campus are prone to being flooded in 30 years, and what makes them more vulnerable than elsewhere?

Dennis Carlberg, associate vice president for University sustainability: The vulnerability assessments we’ve completed for the University show that in general, the Medical Campus is more vulnerable to sea level rise than the Charles River Campus. Since water seeks its own level, we’ve identified the low-lying areas of the campuses as those with the greatest vulnerability to flooding. The lowest sections of the University are the Medical Campus and the east half of the Charles River Campus, especially along Bay State Road and near Myles Standish Hall. The Fort Point Channel seawall near the Medical Campus is the weak link in protecting the city of Boston. The top of a section of the Fort Point Channel seawall is more than two feet below the top of the dam, creating the low point for flooding from the sea.

Adam Pollack (GRS’23), College of Arts & Sciences earth and environment PhD student, who studied First Street’s data: FEMA flood maps are typically generated based on flood frequency analyses, statistical analysis, or rainfall-runoff models. These models are done independently, meaning that flood zones in Massachusetts and New York are not made in the same analysis. In contrast, the model component of First Street is continental-scale and has more full mapping of inland flood hazard than outdated FEMA maps. Empirical validation of these models is tricky—we don’t have databases of property-level flood exposure over time, which would be very useful. That being said, the outdated nature of many FEMA flood maps, the use of discrete boundaries, and the fact that much of the observed flooding in the historic record occurs outside of the 100-year flood zone [areas with a one percent annual chance of flooding] seem like circumstantial validation [of First Street’s model].

BU Today: Can the efforts of BU and others to mitigate the effects of climate change do anything to avert this predicted flooding?

Pamela Templer, CAS professor of earth and environment: In 2017, the BU Board of Trustees approved the Climate Action Plan, which documents the potential flooding both the Charles River and Medical Campuses are likely to face. I was a member of the task force that studied and helped to write the report. Boston University can replace some of its impervious surface area (pavement) with green space that has the potential to soak up much more water or move it to other locations to reduce the amount of flooding on campus and in nearby locations.

When rain falls on pavement, it can’t soak through to the ground, so it moves swiftly and drains into local waterways. That water in that runoff tends to accumulate pollutants and bacteria that can harm the water quality of nearby ecosystems, such as the Charles River and ultimately the Boston Harbor. Planting new green spaces on campus can absorb a large amount of water and provide other benefits, like filtering our water, providing habitat for plants and animals, and creating more recreational space on campus. Adding greenspace would also benefit campus by reducing temperatures in summer, both through shading and increased transpiration (water that evaporates from plant foliage), rather than runoff of water into nearby waterways.

Will BU Be Underwater in 30 Years?