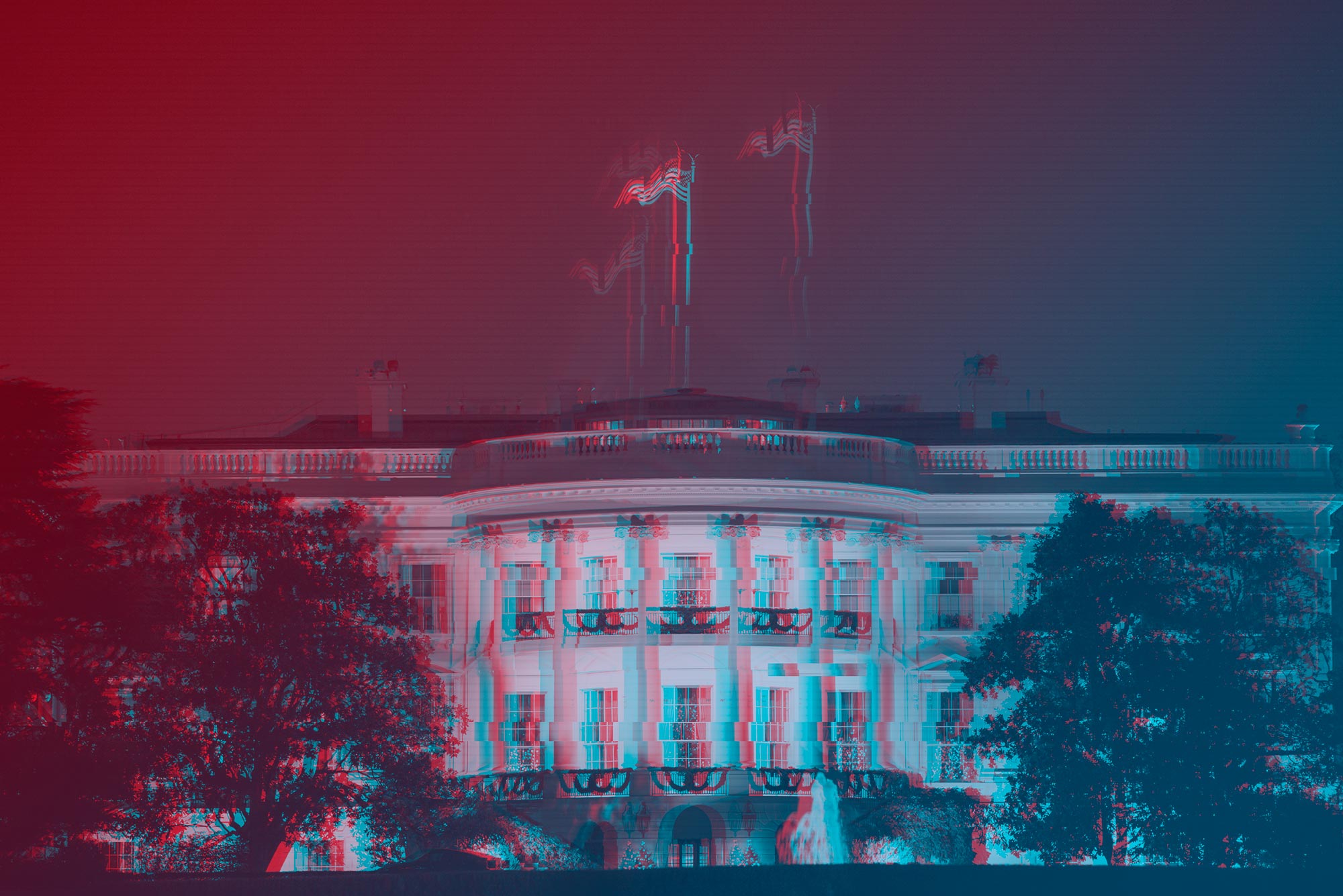 The White House could be ground zero in a crisis typical of unstable nations if President Trump loses on November 3 and refuses to leave office, says Robert Tsai, an incoming BU School of Law professor.

When a US Supreme Court nominee refuses to say that a president should peacefully relinquish power if he loses reelection, we’re in new territory. Judge Amy Coney Barrett’s answer to that question during her confirmation hearing—“To the extent that this is a political controversy right now, as a judge I want to stay out of it”—referenced President Trump’s hints that he might not leave office willingly should he lose to Democrat Joe Biden on November 3.

What would follow that unprecedented step? Or how will America deal with any of the other pitfalls posited by pundits—voter suppression, an undecided outcome on election night, or voting irregularities? We asked Robert Tsai, who will join Boston University’s School of Law faculty in January as a professor of law. Tsai, who comes to BU from American University’s Washington College of Law, specializes in constitutional law and law and government, among other areas.

BU Today: What if there is no winner decided on election night?

Robert Tsai:  If we don’t have a clear Electoral College winner on election night, we will enter what elections experts call “overtime.” It will mean one or more states are too close to call, and it may take some time for enough of the ballots to be counted before someone is declared the victor and the results are officially certified by a state. Each campaign then must decide where, if at all, to contest the results. During the 2000 presidential election, George Bush and Al Gore were dueling in a handful of counties in Florida because they were tied in the Electoral College, and the outcome in Florida would decide the presidential election. The Florida Supreme Court had agreed with some of Gore’s arguments under state law and ordered a recount in certain counties, but the US Supreme Court, on a close vote, overturned the state supreme court, saying that the US Constitution’s equal protection clause would be violated by the recount. This extraordinary intervention under federal constitutional principles determined the winner of the presidential election and short-circuited a political process that had been set up to resolve contested elections of this sort.

There are many who are worried that if there isn’t a clear victor on election night, we could get a replay of Bush v. Gore, but this time spread across several states instead of one. The risk of this possibility is magnified by a few factors: One, we now have a precedent that is already being deployed in federal courts, and the US Supreme Court now has a federal constitutional principle to invoke if enough of its members think it’s worth intervening. Two, the current effort to replace Ruth Bader Ginsburg with Amy Coney Barrett will give Republican-appointed justices a 6-3 advantage. Three, three of its members will have worked for Bush during the litigation (Roberts, Kavanaugh, Barrett). And four, despite the polls giving Biden a healthy national lead, it’s still close in key battleground states, and given President Trump’s high unfavorables, we don’t know how many of his voters are telling pollsters the truth about their leanings.

BU Today: What if mail-in ballots are not all counted on election night?

Battleground states such as Arizona, Florida, Georgia, Nevada, Ohio, Texas, and Minnesota can start processing mail-in ballots as they receive them. Some states can also get a head start tallying votes. Unfortunately, key states such as Pennsylvania can’t start opening mail-in ballots until Election Day. Pennsylvania is a state we are most likely not to know the winner of for a few days. Wisconsin is another state that can’t start counting ballots until November 3.

If the results are close, and there is a large number of uncounted mail-in votes, the differing rules could certainly mean delays in knowing who won a state. For instance, Arizona voters have up to five days to fix a ballot rejected because of a signature issue. Something like this would only matter if there were a lot of ballots excluded for this reason.

BU Today: What if there are voting irregularities or concerns?

Each state has its own voting laws and procedures, which prescribe what counts as a legal vote. The thing that’s nerve-wracking is that there already has been significant litigation in battleground states to either make it easier to vote or make it harder to do so. For instance, in Pennsylvania, the state supreme court just ruled that under state law, nonmatching signatures on a mail ballot cannot be discarded. That’s very important, because it would have given a candidate the ability to try to throw out genuine votes simply because someone later thinks a signature on the mail-in ballot looks off when compared to a signature on file. I just voted by mail in D.C. and can’t remember if I signed it the same way I did for my voter registration!

In Texas, Governor Greg Abbott recently issued an order that forced counties to have only one ballot drop box per county, forcing the most populous counties to shut down multiple drop-box locations they had set up to make it easier for voters to make their views known during the pandemic. Three separate lawsuits have been filed. In one suit, a federal appeals court upheld the governor’s restriction, while the lawsuit in state court has fared better, leading to a victory in the intermediate appellate court. But that ruling will almost certainly be decided by the Texas Supreme Court.

The fact that each state largely controls its own voting policies means that each state has a different sense of what is irregular or illegal in terms of legal voting. This is intensely frustrating for the average citizen and outrageous for a modern democracy. What it means practically is that both the Biden and Trump campaigns will have an army of lawyers who must become well-versed on the nuances of the laws of the battleground states, since that is where any likely legal challenges would occur.

BU Today: What if Trump loses and refuses to accept the results?

Ever since the first peaceful changeover in 1801, when Thomas Jefferson defeated John Adams in a close election for the presidency, we have been lucky to enjoy mostly peaceful transitions of power. That’s including the incredibly controversial Hayes-Tilden contest in 1876 that was resolved through a compromise by a congressional commission, as well as the Bush v. Gore controversy, after Gore conceded once the US Supreme Court ruled against him.

If—God forbid—Trump loses clearly and still refuses to concede, then we would enter an extremely dangerous phase like those we see in many politically volatile countries around the world.

If—God forbid—Trump loses clearly and still refuses to concede, then we would enter an extremely dangerous phase like those we see in many politically volatile countries around the world. We would likely see mass protests in the streets and possible work stoppages. Political elites, such as lawyers, military officials, business leaders, and elected officials around the country, would have to decide what to do—namely, support a regime trying to cling to power or support the people trying to enforce the rule of law in the streets.

While this doomsday scenario is a possibility, I think other scenarios are more likely. Biden could win so convincingly—winning the popular vote decisively and hitting 270 electoral votes or better—that the immense pressure to concede leads Trump to submit, just as past losing candidates have done. Another scenario, which would be chaotic but obviously nowhere as bad as the coup situation, is the overtime scenario we started with: both litigation and possible upheaval in the House of Representatives, as both law and politics play a role in determining who our next president is.

BU Today: What if Trump wins and Democrats raise concerns about voter suppression?

While it would be a problem to broadly undermine someone’s victory by claiming that an election was stolen, it’s important to be able to talk honestly about specific practices of voter suppression and intimidation. In any given election, there can be terrible instances. There is a long history of these efforts to depress voting, particularly against Black people and other racial minorities, not just through legal means but also through armed violence. During 2016, Georgia, like a number of states, pushed voters off the rolls using dubious techniques and closed down many polling places. State officials must cite legitimate and nonracist reasons for doing so, but studies show that these policies often predictably fall heaviest on people of color and young voters. In Florida, voters recently passed an initiative re-enfranchising 1.4 million people who lost their vote as a result of a conviction. But the state legislature, controlled by Republicans, passed a law that forces such people to pay all outstanding fines and fees, and that law was signed by the Republican governor.

What we really need is a new voting rights law at the federal level, one that can harness the power of the federal government to standardize voting procedures, which will make it harder for state officials to engage in shenanigans for partisan or racist reasons. We also need the law to empower the Department of Justice and other agencies to aggressively police new voting standards, since the US Supreme Court in recent years has gutted existing federal voting laws and read the Constitution narrowly to impair the revolutionary nature of the Reconstruction Amendments.

There are 9 comments on What If There Is No Winner on Election Night? A BU Expert Explains

What If There Is No Winner on Election Night? A BU Expert Explains
9
share this