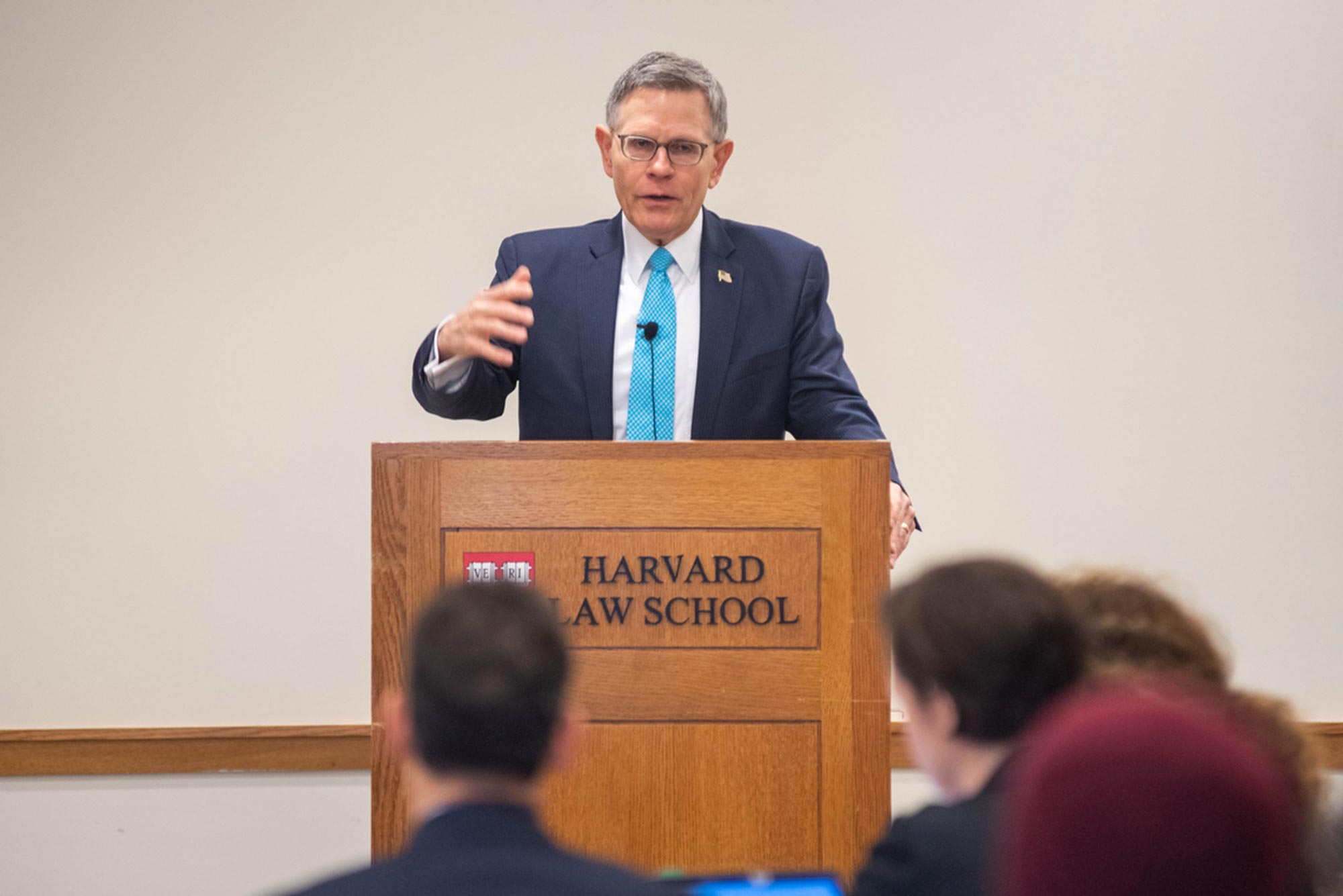 Kelvin K. Droegemeier, the director of the White House Office of Science and Technology Policy, is on a mission to protect the security and integrity of the American research enterprise. And while he doesn’t dismiss the existence of foreign threats to US researchers, he says those threats should be kept in perspective: the overall enterprise is secure.

That was one of the messages to emerge from a meeting Droegemeier held Wednesday at Harvard Law School with senior research officials from Boston University, Harvard, Tufts, MIT, Northeastern, Massachusetts General Hospital, Brigham and Women’s Hospital, Boston Children’s Hospital, and Beth Israel Deaconess Medical Center. BU’s representative at a private session with Droegemeier was Gloria Waters, vice president and associate provost for research.

The broader meeting, which was open to the public yet closed to reporters, was one of a series of sessions Droegemeier has been convening at research institutions around the country to discuss the work of the National Science and Technology Council’s Joint Committee on the Research Environment. He created the committee in May 2019 to address what he considers urgent challenges, such as research environment safety and integrity, safe, inclusive, and equitable research settings, and the administrative burdens on federally funded research.

“We’re here to listen and have a frank discussion,” Droegemeier said during a brief phone interview with The Brink after the meeting. “We had some good suggestions about making sure we’re thinking through certain issues.”

Asked about some of those suggestions, Droegemeier, who was appointed by President Trump in February 2019 and serves as the president’s science advisor, talked about “problematic behavior stuff you see in the newspapers—you see a story about somebody who failed to disclose or somebody who tried to sneak material out of the country or whatever.

“And in journalism, overall, we hear mostly bad stories,” he said. “Our research enterprise, by and large, is one that is secure, that does operate with integrity. But we do face increasing challenges and security risks, and so one of the points I took away was, let’s make sure we present a balanced picture of all the good things that are happening as well as the problematic challenges that we face.”

Those challenges include incidents like one reported in November in the New York Times revealing that the FBI was working with the National Institutes of Health (NIH) to investigate the theft of US biomedical research by scientists with links to China. According to the Times, some of the leading research facilities in the country were “looking into 180 individual cases of possible intellectual property theft.” Michael Lauer, NIH deputy director for extramural research, told the paper: “It seems to be hitting every discipline in biomedical research.

And in an interview with the Boston Herald this week, Droegemeier said, “The FBI tells us that there are over 1,000 cases involving China.”

Droegemeier and other federal officials have emphasized in their public comments and memos that foreign threats to American science exist. He and Office of Management and Budget director Russell Vought wrote in a memo last year that the current US scientific ecosystem “features new and extraordinary threats which must be confronted thoughtfully and effectively.”

The memo went on to say that continued US leadership in research and science “will depend upon striking a balance between the openness of our research ecosystem and the protection of our ideas and research outcomes.” In response, a group of leading science, engineering, and international education organizations, including the American Association for the Advancement of Science, pushed back, writing a letter to Droegemeier and other top federal science officials expressing concern: “Our organizations and members are witnessing an escalating concern among US and international scientists that new policies and procedures under consideration to minimize security risks will have the unintended effect of harming the scientific enterprise.”

“We have to protect our research assets,” Droegemeier told The Brink. ”And by that we mean things like our intellectual property, our proposals, our ideas, our research outcomes. By protect, I mean that those who produce them need to have the opportunity to publish them and to receive credit for it. And when there’s a misappropriation of that credit, for example, somebody taking those ideas and running to another country and publishing them without any acknowledgement of where the work was actually done, that’s really misappropriation. And it’s not playing by the rules of the road.”