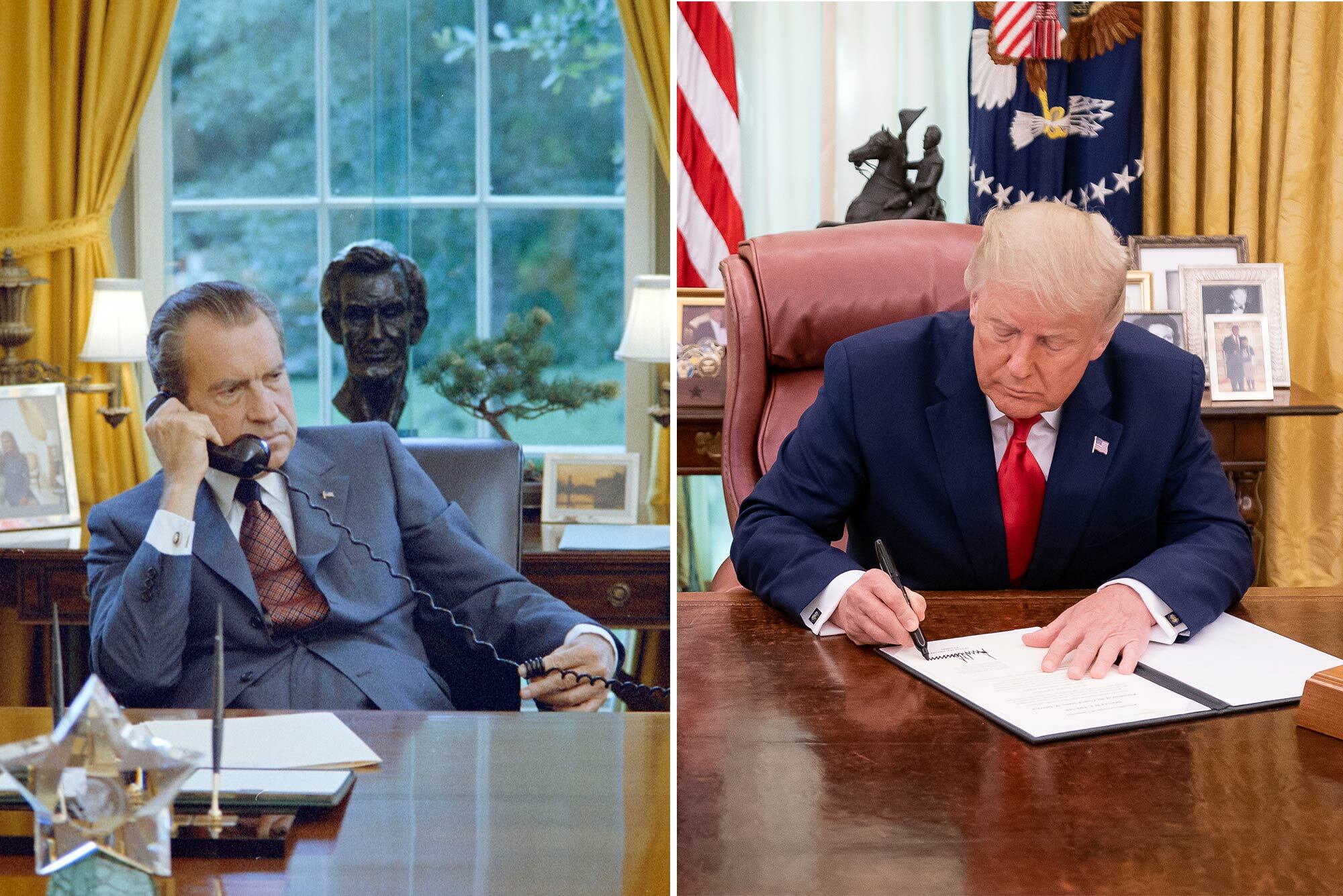 The Trump Tapes vs the Nixon Tapes

President Richard Nixon in 1972 and President Donald Trump in 2020 are separated by several generations, but not in their shared habit of embarrassing disclosures on tape. Nixon photo courtesy of White House Photo Office; Trump official White House photo by Tia Dufour

Over the summer term, Andrew David’s American Presidency in the 20th Century class included a section on parallels between Richard Nixon and Donald Trump. Damned if the latter hasn’t made a prophet out of David (CAS’05, GRS’18), a former College of Arts & Sciences history lecturer

Just as Nixon recorded himself admitting complicity in the Watergate cover-up, which led to his resignation, Trump offered recorded admissions, beginning in February, that he deliberately downplayed COVID-19’s severity (to avoid panic, the president said), precipitating an outbreak that has killed almost 191,000 Americans.

In a bit of déjà vu Yogi Berra would have appreciated, Trump made his admissions to journalist Bob Woodward, known for his groundbreaking investigation of Watergate. But whereas the Nixon presidency made a knight in shining armor of Woodward, critics now condemn the renowned reporter for not publishing Trump’s comments sooner—he withheld them for his book, out this month—saying Woodward might have saved lives had the public been alerted to the deadliness of the virus earlier. Woodward says he needed time to verify whether the often-dishonest Trump possessed sound intel about COVID-19’s lethality.

We posed four questions to David about the Nixon-Trump similarities.

BU Today: Nixon recorded himself and expected the tapes to remain secret, while Trump made admissions to a journalist that he knew would be revealed. What does that say about their different personalities and approaches to the presidency?

David: The history of presidential recordings is unclear. JFK supposedly started them to either have evidence to go after people who crossed him or to write his memoirs. LBJ roughly fell into the same category, as, we think, did Nixon. While JFK, LBJ, and Nixon all expected the tapes to remain secret, I struggle with the idea that they could have imagined they would be secret forever. They were taking a risk. I think part of that reason was for ego. They got power over others with these recordings. So someone like Nixon probably has more in common with Trump than it might otherwise seem.

For Trump, this is about power and access. Woodward embodies establishment status that I think appeals to Trump. Either this appeals to him because it means he’s “made it,” or he enjoys the fact that someone like Woodward wants to talk to him. For Trump, much of this is somewhat about instant gratification. But both Nixon and Trump see/saw themselves as outsiders. When the establishment considers them worthy, that’s something that appeals to them. But Nixon didn’t always need that instant gratification moment.

This is actually similar to Andrew Johnson [who succeeded Abraham Lincoln] back in 1865 and 1866. Johnson, a former slave owner, supposedly hated the Confederacy because he had been a slave owner, and many of the power brokers of the Confederacy had considered him merely a poor farmer. When these ex-Confederates came to him begging and pleading for pardons, Johnson grew obsessed with the attention and became their best friend, destroying Reconstruction in the process and leading to his impeachment.

Woodward’s delay in publishing the recordings has earned him harsh criticism. Whereas Nixon’s case enhanced the public standing of journalists, will the Trump affair indict reporters along with the president in the public’s eye?

I don’t know if it will indict reporters, but I wonder if it will be the swan song of Woodward. There would be some cosmic irony in all this. There has been plenty of great investigative journalism during the last four years. I think those people who tended to distrust reporters will use it as ammo for further assaults on the media in a disingenuous way. I wonder, however, if this will call into focus “access journalism.” The idea that Woodward sat on this, in part for his book and in part perhaps to maintain connections, might very well come under fire. That could have an impact on what remains of his career and perhaps his legacy, [which would be] worse—both in terms of the seriousness of what’s being admitted and the likely political fallout.

Given the political situation today, where Trump’s supporters seem more loyal than Nixon’s were, which recordings are worse—both in terms of the seriousness of what’s being admitted and the likely political fallout?

The Nixon recordings were, at least right now, worse. Nixon’s vulgarity, the way he talked about politics, his openness about his corruption, and the motivations behind his actions were damning for a guy who tried to portray himself as a politician with values and morals. Trump basically has said that values and morals are for losers, to reference another scandal, and he’s in it for results. The Nixon tapes dampened America’s reaction to political scandal to some extent, and as we’ve seen, Trump’s approach to embracing scandal has worked well for him.

The big difference is the lives lost. We know Nixon sabotaged peace talks between the United States and the Vietnamese, costing lives in the process. But that was a fairly recent discovery. Nixon’s tapes were bad, but they didn’t clearly result in Americans dying. I think that’s the big question with Trump’s tapes. Does the factor of American lives strip away his support? For Nixon’s supporters, there was a turning point when supporting him became just too much. That point might still be out there for Trump’s people.

What will the Woodward recordings mean for Trump’s legacy in history?

Part of the impact of the Nixon tapes wasn’t necessarily that the words were so shocking, but that they confirmed what many people, mostly his political opponents, thought Nixon said behind closed doors. Trump is much more open, but I think you have something similar: what he says versus what he believes. This shows what he believes. That will have an impact on his legacy.

The Trump Tapes vs the Nixon Tapes