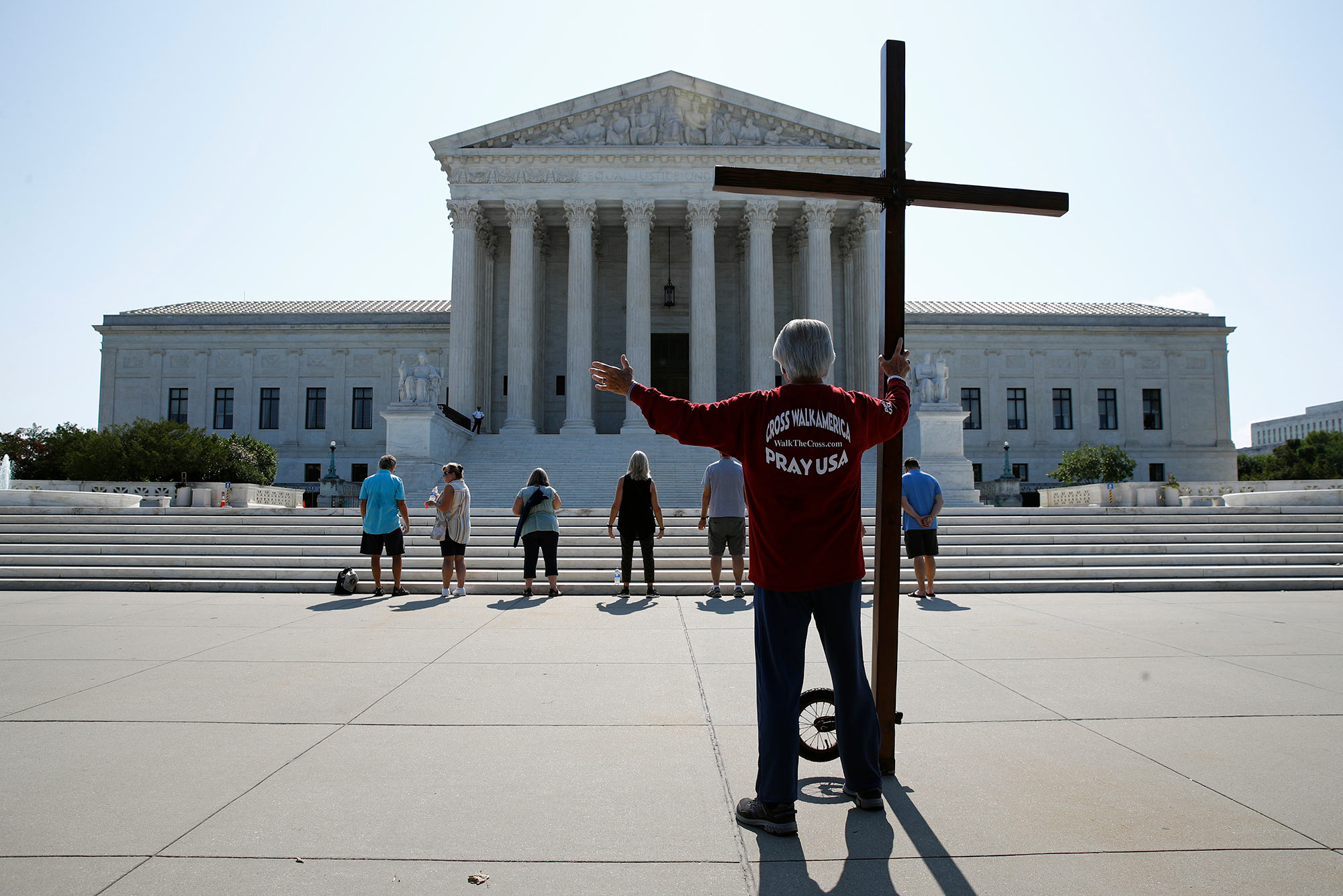 A man praying outside the Supreme Court on July 8, the day the court handed down decisions giving religious groups broad discretion in firing employees and denying contraceptive coverage. Photo by AP/Patrick Semansky

Religion versus Other Rights: The Supreme Court Weighs In

It’s been a good summer for religious organizations that have won a string of decisions in the last week from the Supreme Court. But Jay Wexler, Boston University School of Law professor and an expert on church-state law, spies “a disturbing trend” in the court’s boundary-setting between the two.

In a decision handed down on July 8, the court ruled 7-2 that religious universities and nonprofits can decline to provide their employees with contraception, even if indirectly through their insurer. Liberal justices Stephen Breyer and Elena Kagan sided with the conservative bloc (though mainly because they agreed with returning the case to a lower court; they questioned the majority’s reasoning otherwise).

The case involved the Affordable Care Act (ACA), which requires most employers to cover workers’ contraceptives for free; it exempts houses of worship and allows universities, hospitals, and religious charities to have their insurers provide coverage.

Still, some religious nonprofits, including the Little Sisters of the Poor, challenged the law, arguing it violates their religious principles to allow their insurers to cover contraception, even if the groups don’t have to cover it directly themselves. The Trump administration sided with them and issued a regulation that would exempt employers from covering contraception, not only if they have religious objections, but moral ones, as well. (“BU follows the ACA, which means that we cover contraceptives with a zero copay,” says Nimet Gundogan, the University’s executive director of employee benefits.)

In a second case, Espinoza v. Montana Department of Revenue, the justices ruled on June 30 that the 19 states providing public subsidies for private school scholarships must include religious schools in such programs.

A third ruling, handed down July 8, held that discrimination suits brought by women teachers against the Catholic schools that fired them aren’t permitted by the First Amendment’s protection of religious rights. That decision involved California schools that fired two teachers: one for seeking medical leave for breast cancer (which ultimately killed her, leaving her husband to pursue the suit), the other for what she alleged was age discrimination. The justices ruled that the “ministerial exception,” shielding religious groups from certain federal discrimination law claims, applied in these cases.

BU Today asked Wexler to assess the court’s balance of religious and other rights.

BU Today: Do you think the court got it right in the contraceptives case?

Jay Wexler: The questions answered by the court in this decision were narrow ones that do not fully resolve all of the difficult issues posed by the contraceptive mandate. The majority of the court decided simply that the relevant provision of the Affordable Care Act gave the relevant agency the authority to create exemptions from the ACA’s coverage requirements, and that the agency had complied with requirements of the Administrative Procedure Act when giving notice of those exemptions.

I’m not sure I agree with the whole of the majority’s reasoning on the statutory question, but it’s at least plausible, and Justice Kagan’s concurrence gives some good reasons why even if the statute isn’t entirely clear, the court was right to defer to the agency’s interpretation of the relevant provision. But this doesn’t fully resolve the ongoing dispute. On remand to the lower court, the challengers will revive their earlier objection, unaddressed by most of the justices, that the exemptions are arbitrary and capricious and therefore must be invalidated.

BU Today: Did the decision surprise you?

Jay Wexler: Not at all. I’m never surprised when the Supreme Court these days issues decisions that benefit religion at the expense of other values, such as women’s health or outlawing discrimination against disadvantaged groups.

BU Today: Turning to the Espinoza decision, is it fair, or do you see a threat to church-state separation in it?

Jay Wexler: The decision was pretty much inevitable, given the court’s prior decisions, but it’s still disappointing from the perspective of church-state separation.

The court held in 2002 that the government may funnel enormous amounts of money to religious schools simply by arranging its funding programs so that the money goes first to parents, who then decide where to spend it. In my view, that’s the problematic opinion, because it allows the government to set up funding systems that benefit some religions far more than others. But once that was decided, it was a short step to Espinoza, which held that the government not only can include religion in these funding programs, but also that it must include religion in them. As a result, government bodies at all levels are foreclosed from making the common sense determination that including religion in funding programs is harmful to religious minorities and thus should be avoided. In that way, Espinoza represents a serious threat to church-state separation.

Jay Wexler: Again, this decision was hardly surprising. Protecting a religious institution’s right to determine, without interference, who can be a genuine “minister” of the religion does make some sense, but the question is how far to stretch what counts as a minister. A few years ago, the court held that a teacher at a religious school who taught religion, had a good deal of religious training, and was held out as a minister by the church, counted as a minister and could not challenge her firing under antidiscrimination laws. The recent decision extended this rationale to teachers with far fewer indications of “minister” status than ever before.

Such teachers now cannot take advantage of antidiscrimination laws, even if it would appear that they have been discriminated against for some reason having nothing to do with the employer’s religion. This is unfortunate. I’d be less frustrated by the decisions in this area giving churches special benefits if the court recognized that by singling out religion, the Constitution also imposes special burdens on religion, such as limitations on state funding of religion.

BU Today: What do these rulings tell us about the Roberts Court’s view of religious rights vis-a-vis other rights? Are they a crystal ball predicting future decisions on other issues?

Jay Wexler: The results of all of these cases demonstrate that the Roberts Court thinks religion deserves special benefits but not special burdens, which in my view is a troublesome interpretation of the religion clauses of the First Amendment. There’s no balance. Religious schools can now discriminate willy-nilly against their teachers, but at the same time, the government must include these schools in their funding programs. Unless the makeup of the court changes significantly, it’s virtually guaranteed that this disturbing trend will continue.

Religion versus Other Rights: The Supreme Court Weighs In

Religion versus Other Rights: The Supreme Court Weighs In
0
share this