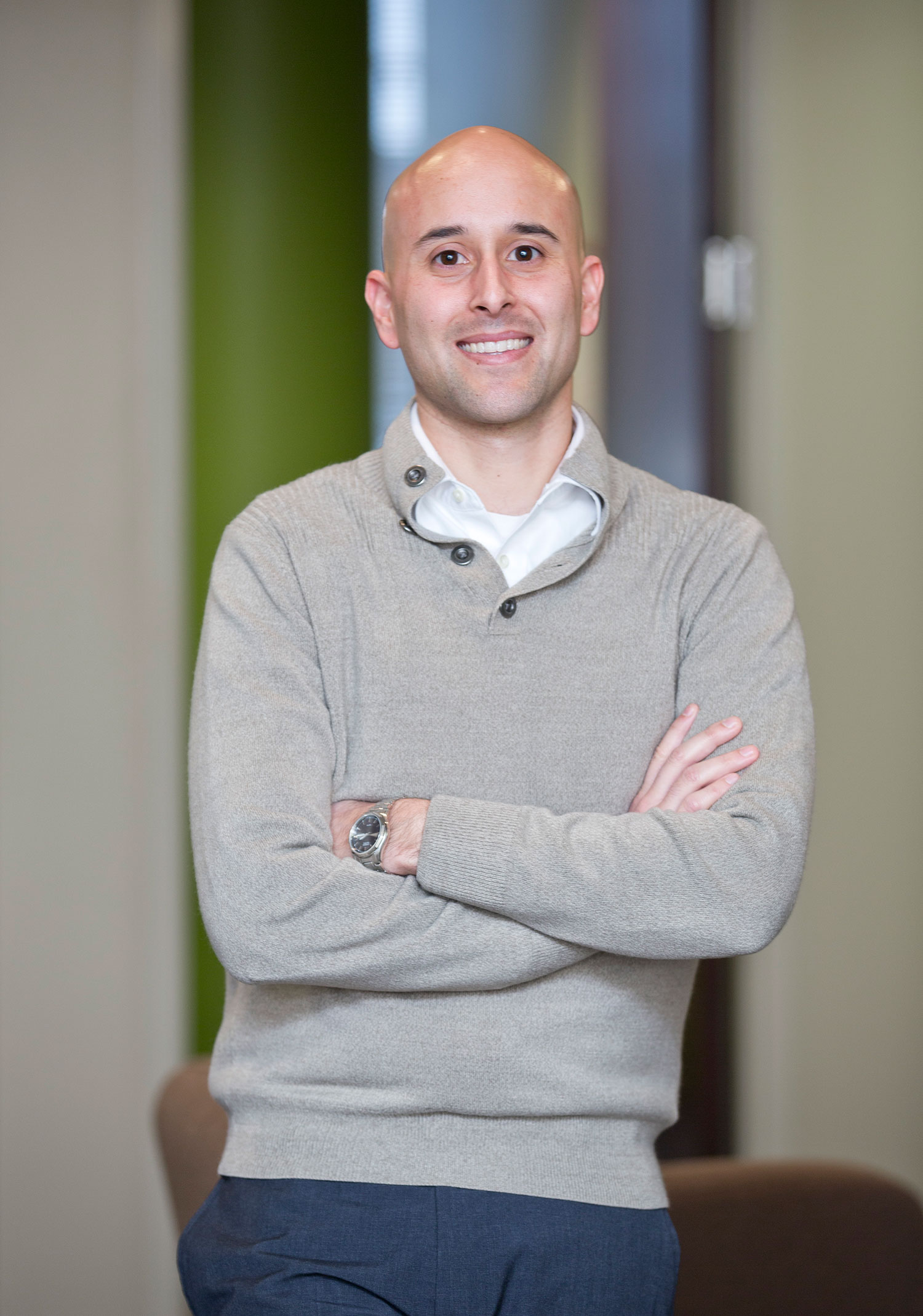 Patrick Reyes grew up in Salinas, Calif., a predominantly Latino community that’s best known for agriculture and as the setting for John Steinbeck’s East of Eden. The Salinas Valley has been called the world’s salad bowl, and Reyes (STH’11) spent time in its vegetable packing sheds, scooping tomatoes and broccoli florets onto party platters destined for grocery stores across the country. That was, until he couldn’t keep up. “I got kicked off the line because I wasn’t doing it fast enough,” he says.

Those packing shed days are long behind him—though Reyes’ connection to his hometown remains strong—and he now seems perfectly suited for his job. The senior director of learning design at the Forum for Theological Exploration (FTE) is responsible for supporting the next generation of pastoral leaders and theological educators.

The paths out of Salinas weren’t always clear to him, but a series of encounters proved influential. As a teen, a man in Reyes’ mother’s life began abusing him and the principal at his Christian Brothers school took notice. He told Reyes he could spend as much time at school as he needed to. “So every day for six years, I was there from band, which started at 7 am, to whenever the last sport or yearbook finished around 8 pm.” He also spent a lot of time with his grandmother. “She taught me how prayer and spiritual life and faith life could ground me in my community,” he says.

Those acts of kindness helped Reyes focus on a potential career. At first, he wanted to help his hometown’s next generation by teaching history and religion, but then, after spending a postcollege summer back in the packing sheds, he wondered, “Who’s going to talk to my community, from my community, and with my community?” A chance encounter with a Methodist minister helped him realize that he could be that voice.

“After finding out that I had a college degree and an interest in religion, she told me about seminary,” he says. “She mentioned a bunch of different schools and Boston University was one of them.”

Reyes’ experience in Boston was challenging and formative. He found himself surrounded by people with a passion for the sort of work he knew was vital—social work, helping marginalized people of color—and yet he didn’t see himself, or his Latino culture, represented in the curriculum, the faculty, or his classmates. “The way that the system is set up, there’s always a cultural commute that students and scholars of color have to do,” he says of academia. “We have to ask, ‘Where are my people? Where is my history?’”

But he saw things beginning to change during his time at STH. Mary Elizabeth Moore had just arrived as dean and quickly became one of Reyes’ mentors. “Everything that Mary Elizabeth taught was just gold,” he says. “She pulled me aside in every moment where I felt like I didn’t belong, reminded me that I did, and that my work was of value.” Some of the writing he developed in a class with Moore provided the foundation for his book, Nobody Cries When We Die: God, Community, and Surviving to Adulthood (Chalice Press, 2018). The book, which explores vocation, meaning, and purpose, and reflects Reyes’ own story of surviving to adulthood, received the Hispanic Theological Initiative Book Prize.

Reyes now sits on the Dean’s Advisory Board and in 2019 STH honored him with its Distinguished Alumni–Emerging Leader award. “I’m overwhelmed with joy to see the shift that BU has made in a decade,” he says, referencing STH’s many Latinx faculty members, diversified curriculum, and programs like the Raíces Latinas Leadership Institute and Hispanic Youth Leadership Academy. “It’s not just welcoming of Latinos, it’s a completely new place.”

After completing his PhD at Claremont School of Theology and working in higher education as a program director and then as an assistant dean, Reyes learned about the position at FTE. With the encouragement of Moore, among others, he moved to Atlanta in 2016.

He acknowledges that his job is hard to define. He coordinates grants and scholarships, develops partnerships, and organizes workshops and conferences. But the goal is simple: giving 18-to-35-year-olds space to discern their calling. “We’re helping them think through what it means to be called to ministry in the 21st century,” Reyes says. “So, everything from pastoral ministry to chaplaincy, college campus ministries, social justice ministries—basically anything that they feel called to.”

Last year, Reyes’ job had him speaking at colleges and mobilizing to end mass incarceration. He serves on school and nonprofit boards to close the opportunity gap for Latinx and people of color. Reyes brought deans and directors of doctoral programs together in Yosemite National Park to discuss how to call students of color to spiritual life and he gathered doctoral students of color for a writing retreat at Lake Tahoe. He’s partial to the beauty of California, he admits. Now, though, he must find ways to connect with those groups remotely during the coronavirus pandemic.

“I’m in my element every day. I love it,” he says. “I get to bear witness to the changes that are happening in theological education—for the better.”