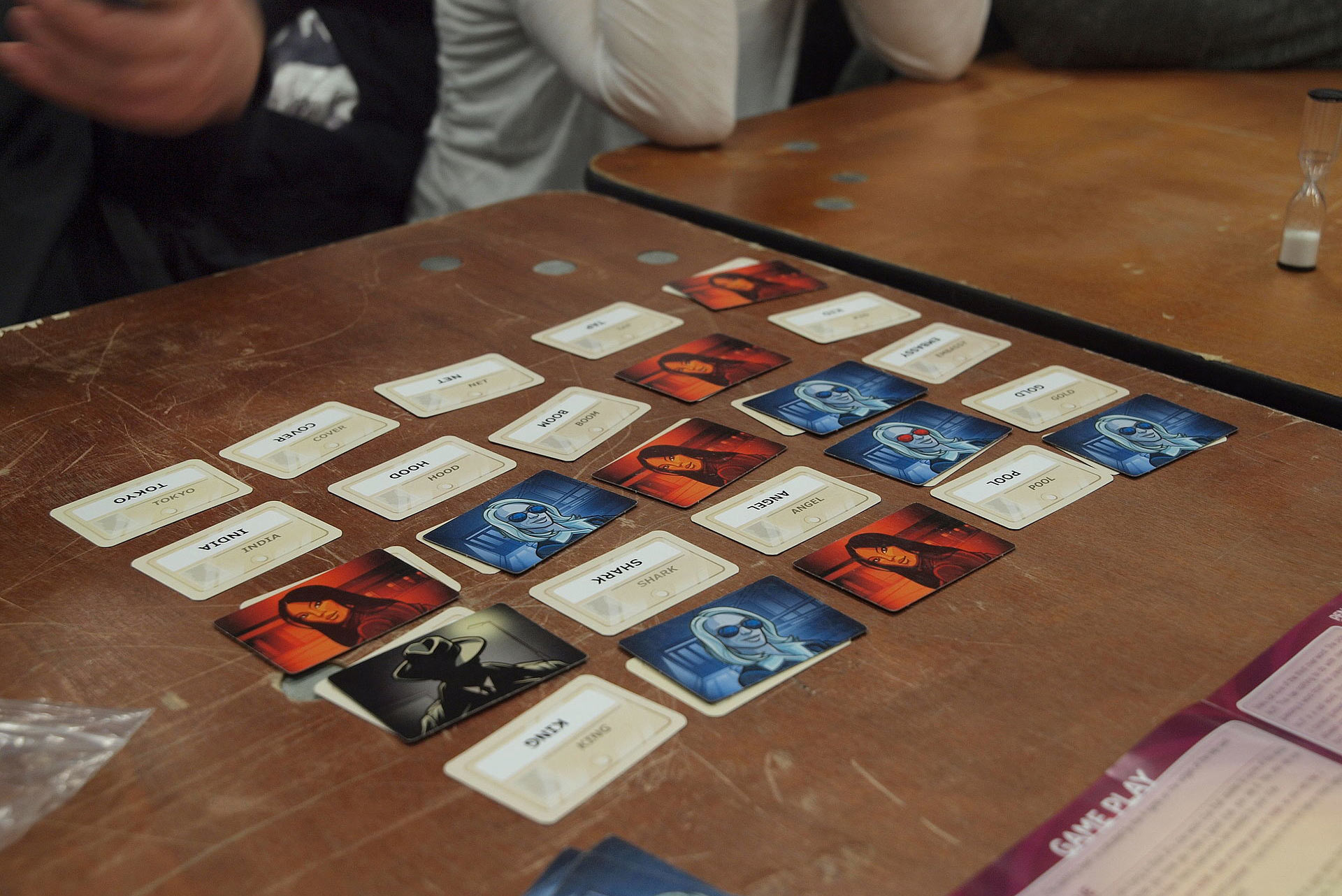 Codenames is a party game where two teams (red and blue) compete to correctly guess all of their words on the board, based on word-association clues provided by a teammate. Photo courtesy of Wikimedia Commons

Board Games Are Back, and These Nine Are Great for a Pandemic

Games are a great way to pass the time while stuck indoors. If you don’t want to jump on the recent craze of playing tic-tac-toe with your pets, gather some quarantine buddies for serious—and not-so-serious—tabletop gaming. BU Today has compiled a list of fun strategic board games that will help you through the quarantine period (and then some), no matter how many people you’re cooped up with.

This one’s obvious, if perhaps too real. If you want greater control over global outbreaks, pick up this cooperative game, where players work together to stop four diseases (colored cubes) from spreading across a map of major world cities. Players have a limited number of actions on each turn to travel between cities, treat diseases (remove cubes), build research stations, cure diseases, and other tasks. More disease cubes are added to random cities after each player’s turn, as the diseases spread. If all four diseases are cured, everyone wins. But you can lose in a few ways, including having too many outbreaks. Things get out of hand quickly, leading to tight games. The game has an engaging storyline that unfolds each time you play—and can take weeks to see through to the end.

Ready to start over on another planet? Try Terraforming Mars, where you compete for points by incrementally raising three terraforming levels, oxygen, temperature, and oceans, to make Mars habitable. You’ll collect and play many different action-based cards, place habitat tiles (cities, greenery, oceans) on a gameboard of Mars, and gather necessary resources (money, titanium, steel, plants). Increasing a terraforming level earns points, as do other means, such as earning awards. The game ends once the levels max out, and the player with the most points wins. It’s complex, lengthy, and addictive and will keep you busy well through quarantine.

Bonus: If you’re self-isolating, the game has a fantastic solitaire version, where you race against time to terraform the Red Planet all by yourself.

If you want to escape reality entirely, Gloomhaven is a good choice—it’s like a choose-your-own-adventure Dungeons & Dragons. Everyone starts with a ready-made character—think wizards and warriors—with unique abilities, who will battle monsters in various scenarios, built with modular board segments, in locations across a fantasy world map. You’ll equip your character with weapons, items, and abilities and also follow different storylines, open new characters, and help the city prosper. With details too numerous to explain (the rulebook is 50 pages), you play cards to move around a gameboard and kill enemies, trying to achieve specific goals. With about 100 scenarios and 17 playable characters, this game could keep you occupied for the remainder of the year.

Bonus: A Kickstarter campaign for its sequel, Frosthaven, just ended, blowing past its funding goal of $500,000 with a total of $13 million. It’s scheduled for release in March 2021.

Instead of being in a crowd watching fireworks outdoors, make your own pyrotechnics with Hanabi. In this cooperative game, all players win by successfully piling up five colored sets of fireworks cards—red, yellow, blue, white, green—in ascending numerical order, from one to five. But there’s a catch: you can’t look at your own cards. On each turn, you provide one clue to another player about cards they hold (the color or number). You’re also limited by how many clues you can give before you start discarding to earn back clues—often with limited card information. Put down a card out of numerical order or the wrong color three times, or discard a card you need, and you all lose. It’s easy to learn, but incredibly hard to beat. You may still be playing come July 4.

Sick of your own house? Build and explore a haunted house in this game that pits one player against many. Separate characters first cooperatively build an ever-expanding haunted house by taking turns connecting square tiles of ominous rooms—such as nursery, library, and chapel. As you explore the house, you collect magical items and weapons, and have encounters that strengthen or weaken your character. Eventually, a player is forced to betray the others—hence the title. Then it’s a bloody clash between two teams: the traitor and remaining survivors. Each team has separate rules and a victory condition. First team to fulfill its victory condition wins. With countless ways to build your haunted house—and 50 possible traitor-survivor scenarios—Betrayal has great replay value.

If you’re a fan of Clue, try Mysterium. One player is the ghost and the others are mediums trying to solve the ghost’s murder. First, the ghost secretly assigns each medium three unique suspect cards, each showing a detailed illustration of a person, place, or weapon (like Clue). Then the ghost must get each medium to identify their unique suspect cards from among all the cards pooled together on the table. To do so, the ghost can only hand the mediums vision cards showing weird art—no talking allowed. Mediums then guess if anything on the vision cards—objects, people, colors, shapes, patterns—points to their specific suspect cards. If all mediums guess all their suspect cards by a certain round, everyone wins. If not, everyone loses. It’s a highly interactive game of abstract thinking and cool art.

Think you really know your quarantine buddies? Try this social-deduction game, where players are randomly assigned secret roles as liberals or fascists (a team including Hitler). Each round, they elect a president and a chancellor. The president draws three random law cards—red (fascist) or blue (liberal)—discards one, and hands two to the chancellor, who discards one. The remaining law card is placed on a playing board, and if it’s red, players decide if it was an unlucky draw or if the president and/or chancellor chose red and therefore is fascist. Liberals win by passing five blue laws; fascists by passing six red laws. There are other ways to win: assassinating Hitler (liberals) or electing Hitler chancellor (fascists). This interactive game of deception and sleuthing makes it to the table at many parties.

Keep your mind sharp with Codenames, which, like Taboo, uses word association. Players, split into red and blue teams, choose a codemaster and put random word cards in a 5-by-5 grid for all to see. Codemasters select a secret key card showing a 5-by-5 grid of colored squares—some red and blue, some white, and a black. Cluemasters must get their team to guess words on the table that are in the same spots as their team’s colored squares on the key card. Each turn, they provide only one word-association clue and the number of associated words (for “Eagle” and “Owl,” you may say, “Bird: 2”). First team to guess all their words wins. If a team guesses the word in the black square, they lose instantly. This is another popular, replayable party game.

To pick up the pace, try Bang! The Dice Game, which pits the law against criminals in the Wild West—with some social deduction. Each player is randomly assigned a secret role—sheriff, deputy, outlaw, or renegade—and a character with abilities and a starting life total. Everyone knows the sheriff’s identity, but no one else’s. Each turn, a player rolls five dice, with various results: shoot nearby players or all players, give some life to yourself or others, or take arrow tokens—which results in losing more life later. To win, the sheriff and deputies must kill all outlaws and renegades, outlaws must kill only the sheriff, and the renegade must be the last player alive—killing any other renegade. This is another party game that encourages folks to argue and interact—if only to figure out who to shoot next.

Board Games Are Back, and These Nine Are Great for a Pandemic

There are 5 comments on Board Games Are Back, and These Nine Are Great for a Pandemic

Board Games Are Back, and These Nine Are Great for a Pandemic
5
share this