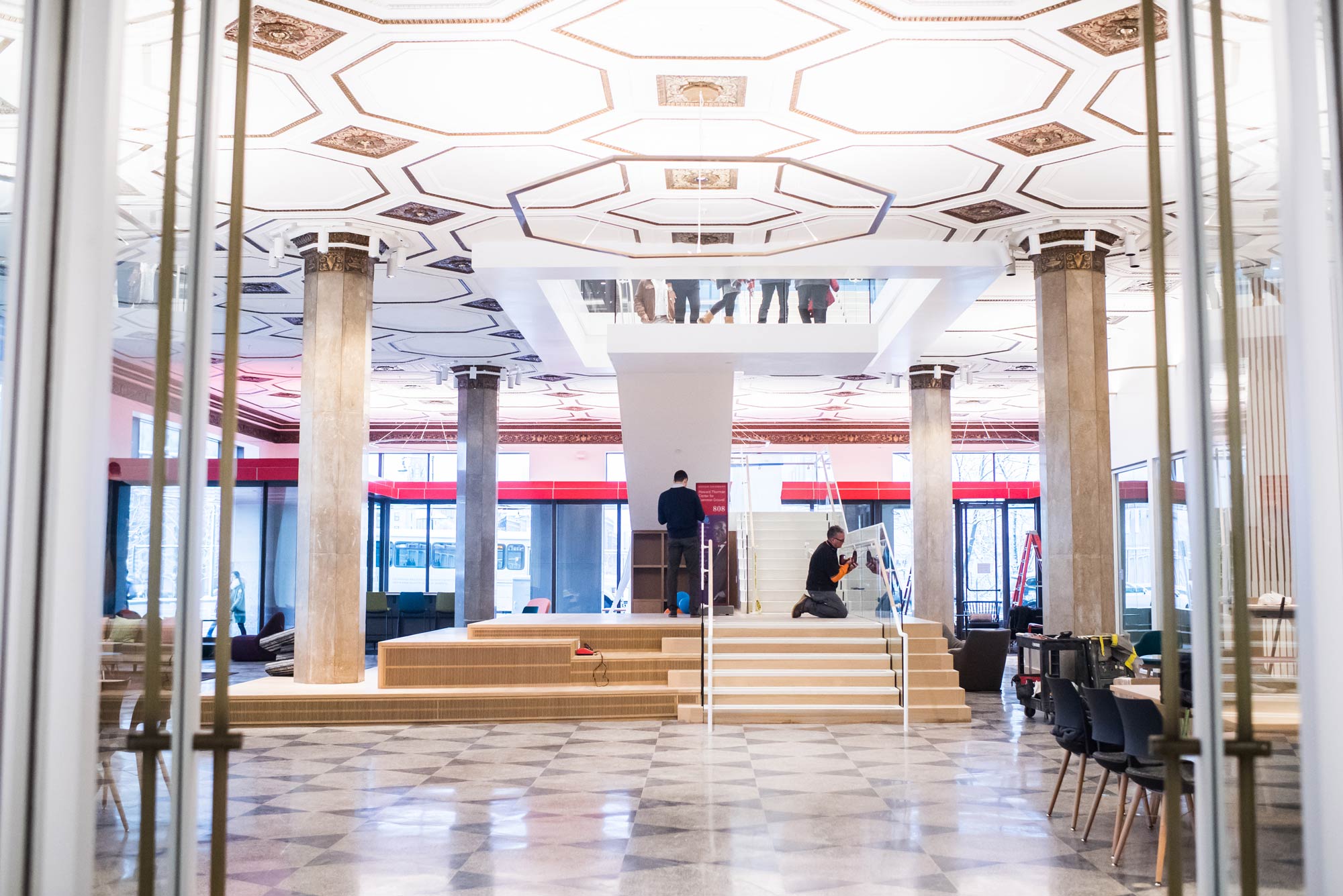 Breathing room: the new Howard Thurman Center for Common Ground  at 808 Commonwealth Ave. has five times the space of its predecessor in the George Sherman Union basement.

“My dream was to build a structure consisting of a sanctuary, a studio theater equipped both for electronic audiovisual presentations and for drama, a dining room, parlors, and classrooms—and an inner court. This setting would contribute to a year-round program, integrating religion, art and various cultures.”
—Howard Thurman (Hon.’67), dean of Marsh Chapel (1953-65)

It took nearly four decades after his death in 1981, but Howard Thurman’s dream has been realized, and then some, in the relocated and expanded Howard Thurman Center for Common Ground (HTC), which opens Tuesday, January 21, at 808 Commonwealth Ave. Theater? Check. Classrooms? Check. Sanctuary for meditating, with relaxing moss on the walls? (More on that shortly.)

As for an “inner court,” enter the center under its crimson awning and you’re in a cavernous lounge, the Ryan and Miller Great Room. The gift of BU trustee Sharon Ryan (Sargent’70) and her husband, Bob, the lounge is sprinkled with clusters of different furniture, fine-tuned to accommodate all sorts of student activities: couches around round tables and swivel chairs for conversing, trays off the back of one couch, with high seats, for working or eating.

Such is the precision planning that went into the new HTC, BU’s student hub for cultural programs that promote Thurman’s inclusive-community philosophy. Perhaps the biggest change is geographical—no longer situated in the dark and cozy basement of the George Sherman Union, the HTC takes center stage on BU’s Charles River Campus, next to the Joan & Edgar Booth Theatre on Comm Ave, at the bustling corner across from the BU Bridge.

Since its 19,000 square feet, spread over the building’s first and second floors, quintuple the space of the old center in the GSU, students worried that the new digs could “lose the coziness and the intimate feel,” says Pedro Falci (COM’11, Wheelock’15), HTC associate director. “So we tried to create nooks and pods with the different furniture designs so a group of friends could, in essence, just take over a section.”

The flip side of cozy is “cramped,” Falci’s adjective for the 14-year-old former center. That won’t be a concern now, and ahead of this week’s celebratory events (see sidebar), the HTC has moved into the building it will share with the 808 Gallery and operations of Metropolitan College and the College of Fine Arts.

The move followed a determination in 2015 by BU’s leadership that expanding the visibility and mission of the center was essential in the face of mushrooming racial turmoil nationally, especially on the University of Missouri campus.

The result at 808 is the HTC on steroids—its expanded elbow room intoxicating for administrators. During a tour with BU Today, Kenneth Elmore (Wheelock’87), associate provost and dean of students, can’t resist trying out a chair in every room and perching on the terraced landing of the staircase to the second floor. The landing doubles as a platform for speakers and triples as seating space for students, who’ll be given cushions.

Architect Beth Wilson-Shunta of NBBJ says her firm designed a space “that supports existing programs, allows for expanded programming, and captures the energy of the people who make the center unique. The design juxtaposes the historic and the modern, celebrating each period individually while bringing them together to invigorate the activity within. The building’s existing appurtenances, she says, combine with the new, geometric patterning of carpets, fabrics, lighting, and new ceilings to create a space that is comforting and energizing for students.”

Whereas the old HTC averaged 600 to 700 students visiting during a week, expectations are a lot higher for the new space. “Now, we have the capacity to host thousands of students a day,” HTC director Katherine Kennedy says.

Growing that user base was a key goal in moving to 808 Comm Ave, a 1927 Classical Revival structure that originally housed a Cadillac-Oldsmobile dealership. A reminder of that heritage, a Caddy insignia, hangs on a wall of the Gathering Place off the Great Room, a smaller room for the HTC’s regular Tea Time, Book Club, and other intimate conversations.

Floor-to-ceiling windows fronting the corner of Comm Ave and Essex Street make for a can’t-miss advertisement of the new center, affording a glimpse inside for passers-by. It’s a big change from the relative obscurity of the old subterranean, signage-starved Thurman Center. The fishbowl view evokes the design of CitySpace, WBUR’s new events center up the street, and that’s deliberate. Falci says the HTC is now part of a culture and arts city block that includes CitySpace, the Joan & Edgar Booth Theatre, and CFA’s Production Center.

HTC’s new Events Space, off the rear of the Great Room, rivals that of CitySpace. Its raised stage, drop-down projection screen, dual 90-inch monitors, and seating area for 180 make it a venue for panel discussions, theater and band performances, and banquets that the old HTC could only dream of hosting.

All that room means the potential for new collaborations with other parts of the University. “Our neighbors on the second floor are the CFA department of musicology and ethnomusicology, and they’re already itching to do impromptu jam sessions and live music here,” Falci says. “We can program in WBUR’s CitySpace, and they can do things in here.” MET’s Gastronomy Program and Programs in Food and Wine will use the Gathering Place for tastings and demos.

New collaborations will also take place on the second floor, reached by an elevator or that staircase (which has built-in cubbies for the  center’s lending library). There, three classrooms, looking out over the BU Bridge and surrounding area, are being used by a half dozen BU schools this semester for courses from religion to Japanese and Jewish literature to sports journalism.

The second floor also has the Commons, a room with retractable glass walls that will host the HTC’s signature weekly Coffee & Conversation forums about current events. The Commons is the go-to space as well for evening meetings of student clubs and organizations. Outfitted with overhead projectors and screens, the room permits students and staff to hold videoconferences with students abroad and with other universities. Kennedy says that at the old center, “we would do FaceTime on somebody’s laptop for our students studying abroad. And we never connected with another institution.”

Come upstairs, too, for that mossy sanctuary mentioned earlier. The plant fills part of the wall in the circular Listening Room. The dimly lit, cork-floored chamber, about six paces in diameter and with a padded crescent couch along half of the wall, is a quiet space for meditation and reflection. (Sorry, tech addicts must check their smartphones at the door.) Wall recesses outside have meditation cards for those who want them, with different quotes from Thurman.

“Howard Thurman would say how good it is to center down,” Kennedy says. “And that means leaving all of the outside, outside, and you going down deep inside yourself to discover who you are.”

The inclusive process that resulted in this new space would have heartened Thurman, Elmore says. Thurman grew up in segregated Florida, mentored Martin Luther King, Jr. (GRS’55, Hon.’59)—who has an eponymous conference room at the new HTC—and advocated equal rights.

Now it’s up to BU’s students to fulfill Thurman’s dreams.

“Community cannot for long feed on itself,” Thurman once said. “It can only flourish with the coming of others from beyond, their unknown and undiscovered brothers.”