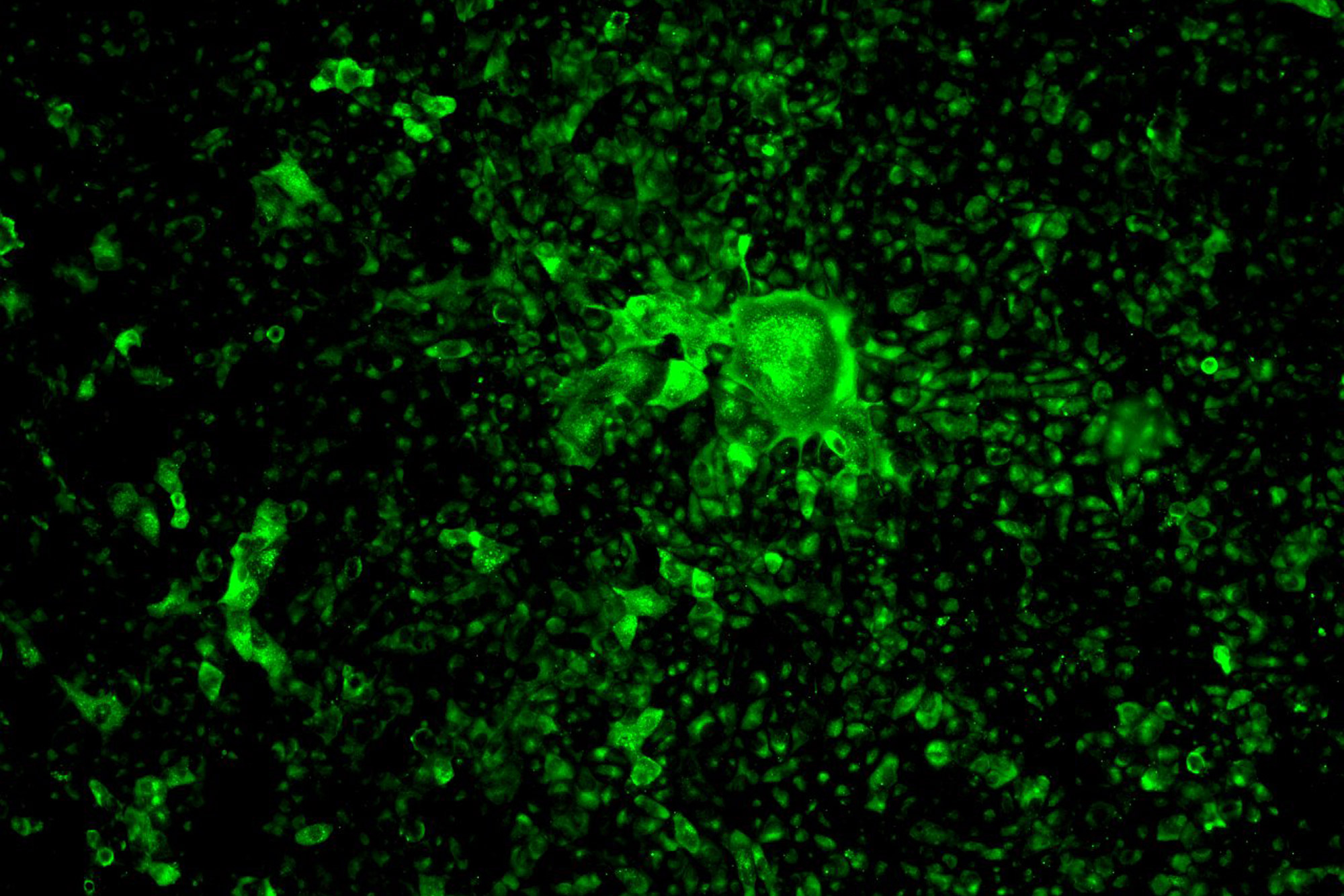 BU NEIDL scientists have discovered how to make cells infected with the novel coronavirus glow green under blue light, making it easy to see the whereabouts of the SARS-CoV-2 virus responsible for the illness known as COVID-19. Photos courtesy of the Davey Lab

Coronavirus in the Lab

“Everybody has dropped everything else” to work on the novel coronavirus

First things first: in order to take out an enemy, you’ve got to be able to see the enemy. But how do you “see” a seemingly invisible invader like SARS-CoV-2, the novel coronavirus responsible for more than a million COVID-19 infections around the world? Scientists at Boston University’s National Emerging Infectious Diseases Laboratories (NEIDL) have found a way to light up the SARS-CoV-2 virus using glowing antibodies, making it possible to detect the virus as it infects laboratory cell cultures.

“We can now see the enemy—it’s like switching on the lights in a dark room,” says NEIDL microbiologist Robert Davey. It’s the first major step forward in his team’s SARS-CoV-2 research that began on March 19, 2020. They and other teams at NEIDL—including one group examining SARS-CoV-2 and the immune response it inflames in animals—are the only scientists in New England working with live copies of the novel coronavirus.

Davey’s team specializes in pitting thousands upon thousands of drugs—small molecules made of different chemical concoctions—against lab cultures of cells infected with contagions, allowing them to rapidly detect which drugs are most effective at halting or reducing infection. Now that they’ve effectively got eyes on the SARS-CoV-2 virus’ whereabouts inside the cells it infects, the team is ready to screen upwards of 20,000 drug compounds to test their efficacy in halting or reducing COVID-19 infections.

The number of compounds the team expects to test has more than doubled in the two weeks since news of their research gained national attention. “It seems like we have an almost infinite number of compounds to test,” Davey says. “I’ve had an avalanche of email and telephone calls from biotech and pharma companies.”

The antibodies that will allow Davey’s team to see SARS-CoV-2 are made of the same parts and proteins as the antibodies the human immune system produces in response to COVID-19 infection. Like your own antibodies, they are designed to zero in on SARS-CoV-2 and interlock with a perfectly fitted keyhole, made of proteins, on the surface of the virus. In humans, antibodies glom onto viruses to flag them for disposal by killer immune cells, which patrol our bodies and destroy any foreign materials identified by antibodies.

Davey’s team is using antibodies for a different purpose.

“You use one antibody that detects the presence of the virus—then on top of that you link another one that fluoresces under blue light,” Davey says. “You end up with a little stack of antibodies attached to SARS-CoV-2, and the last antibody on the tower lights up the virus’ location.”

But to create that perfect interlocking stack of antibodies, Davey’s team had to test a number of them. “We have very particular requirements—we need these antibodies to stick together really tight and give us a good signal [via fluorescence],” Davey says. “They act like Velcro or keys into locks; you want the key to fit really well into the lock.”

When the key holds into its lock really well, Davey says, that allows them to speed up their drug testing process, which requires physical agitation of the virus and infected cells. With the flood of new compounds that Davey’s team has been sent to screen, the ability to work quickly will make all the difference. To get ready, he called up lab equipment provider BioTek Instruments to order another cell-imaging machine. Instead, the company donated one without hesitation. “They said, ‘OK, we’re sending one.’ They didn’t even ask for money,” Davey says. “It takes a village—we’re all on the same team.”

Typically, Davey’s team handles some of the world’s most lethal diseases, like Ebola or Marburg fevers, inside a Biosafety Level 4 (BSL-4) laboratory, which has the highest possible level of biosafety containment used for infectious agents that pose especially high risk to humans. BSL-4 is a full step of containment above the required BSL-3 that’s needed for working with live copies of SARS-CoV-2.

But the personal protection equipment that researchers must wear for BSL-3 work is the same gear that hospital clinicians are direly short of right now. So, at the NEIDL, one of the few research facilities in the United States to have both BSL-3 and BSL-4 laboratories, Davey and the members of his team will handle the SARS-CoV-2 virus while wearing full, airtight biocontainment suits, each with its own oxygen supply, taking the virus up to the BSL-4 level of containment.

Several airlocked chambers away from Davey’s lab, another NEIDL team is gearing up to begin their own research on the novel coronavirus at BSL-4, too. “We’ve made a conscious decision to do our research in BSL-4 so that we’re able to conserve the personal protection equipment that the first-line clinical workers and doctors need,” says Anna Honko, a microbiologist on the team.

Together with fellow NEIDL microbiologist Anthony Griffiths and other teammates, they’ll be studying the SARS-CoV-2 virus and watching it closely in animal models of the disease, which will allow the team to finally understand how exactly the virus is transmitted between hosts, infects them, and sometimes kills them. (It’s not just humans that are vulnerable to SARS-CoV-2; the Bronx Zoo announced on April 5 that at least one of their big cats, a tiger, had tested positive for the novel coronavirus after showing some mild symptoms.)

“We’ll be examining changes in the immune response, looking at how the immune system signals infection and mounts a response,” Honko says. “Is anything [about SARS-CoV-2] producing a unique signature or fingerprint [in the immune response]? Why is this virus different from SARS or the common cold? We need to better understand the [COVID-19) disease to develop new therapeutics.”

They’ll be looking at the activity of cytokines, tiny proteins that cells emit to alert the body’s larger immune network of a foreign invader’s presence. That helps jump-start the process that eventually leads to generation of antibodies against a virus like SARS-CoV-2, which the body must produce in order to fight off infection. “If we know how SARS-CoV-2 triggers immune activation in a particular way, then that can tell us how effective vaccine candidates may be in a particular population,” Honko says.

She adds that a major interest of the team is to understand how SARS-CoV-2 is so well adapted to spread through asymptomatic transmission, transferring infection from seemingly well people to others around them. Although more than one million people have officially tested positive for COVID-19 around the world, experts fear many more people are carrying the SARS-CoV-2 virus without showing any symptoms, making it extra difficult to contain the virus’ spread.

“It’s sad to say that we’re enthusiastic about starting this work, but we’re fortunate to be in a position where we can help,” Honko says.

Honko, who lives within walking distance of the NEIDL in Boston’s South End, says she and other researchers at the NEIDL have largely been working remotely and meeting online, except for when they need to suit up and conduct hands-on research inside their labs. Despite the NEIDL’s proximity to Boston Medical Center, which is treating COVID-19 patients, Honko says the neighborhood’s streets are eerily quiet. Inside the NEIDL, all research is now laser-focused on the novel coronavirus.

“Everybody has dropped everything else they were doing to help,” she says.

There are 17 comments on BU NEIDL Scientists Can “See the Enemy,” Making Headway on COVID-19 Research