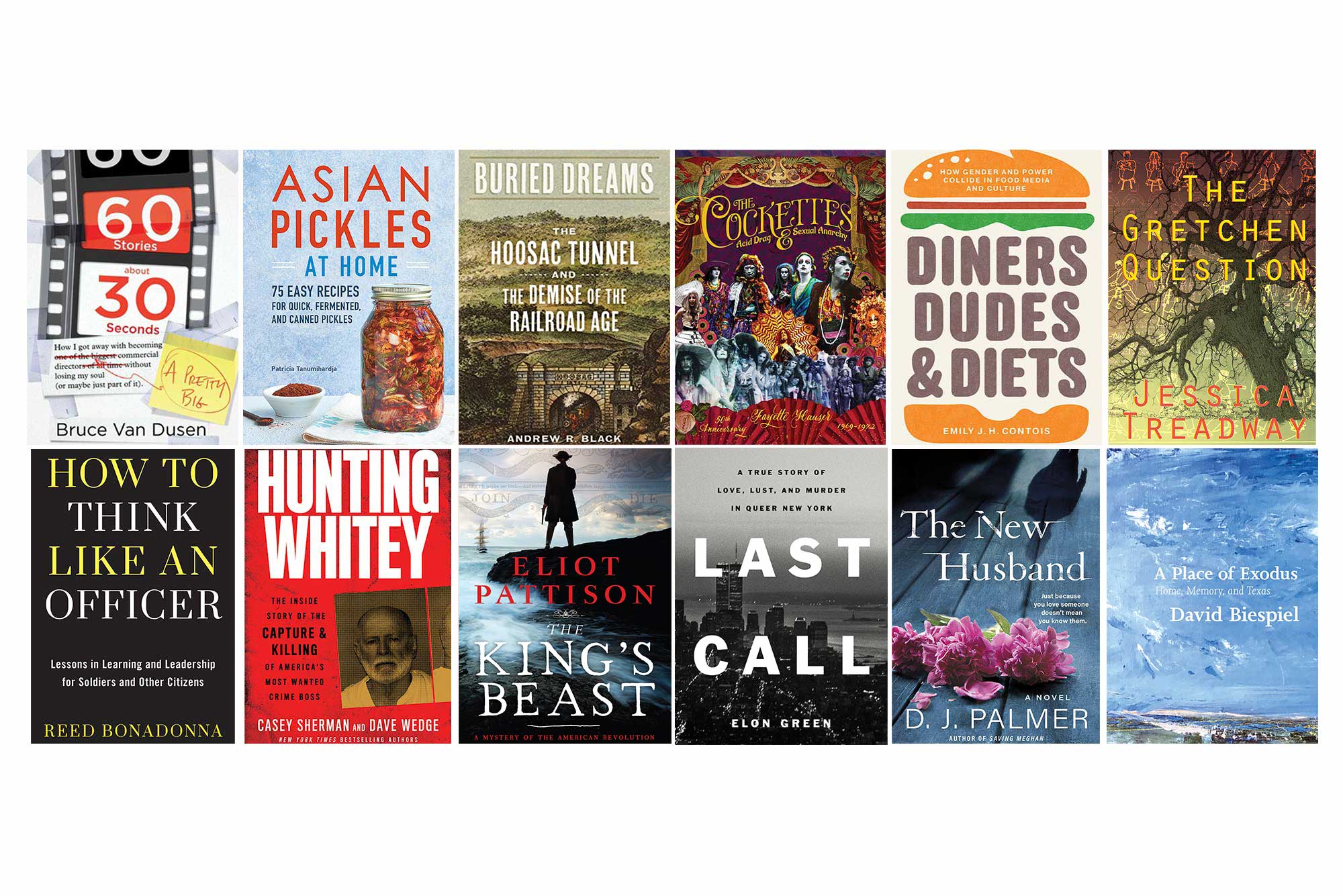 60 Stories About 30 Seconds: How I Got Away With Becoming a Pretty Big Commercial Director Without Losing My Soul (Or Maybe Just Part of It)
Post Hill Press, 2020
By Bruce Van Dusen (COM’76)

One of the ad industry’s most successful directors looks back over 45 years of making spots for companies like Ford and TD Ameritrade, not to mention Crazy Eddie and Minute Rice. Funny anecdotes and plenty of insights for aspiring filmmakers.

The author, raised in Singapore by Indonesian Chinese parents, grew up eating everything from cucumbers to bird’s eye chilies in a sweet-tart brine. Here, she outlines the basics and the background of recipes from Japan, China, Korea, India, and Southeast Asia, like kimchi and miso-cured daikon.

The tunnel, in the Berkshires of western Massachusetts, was an engineering marvel that took nearly 25 years to build (1851‒1875) at a cost of almost 200 lives. But it never brought the promised economic boom and was eventually sold to a private rail company. Black examines what happened, in the context of 19th-century American history and shifting cultural forces.

Hauser was a member of the famed drag theater company in San Francisco’s Haight-Ashbury in the years of psychedelic drugs and social upheaval. Countercultural and glittery, their improvised satires set the stage for much that would come after.

You may never watch the Food Network quite the same way again after reading this double-stuffed, triple-decker book about dude-friendly food marketing and the gendered world of selling and consuming food in America.

A haunting, psychologically complex novel about a mother who must choose between protecting her son and revealing her deepest secrets.

How to Think Like an Officer: Lessons in Learning and Leadership for Soldiers and other Citizens
Stackpole Books, 2020
By Reed Bonadonna (GRS’99)

Patton, Churchill, and Sun Tzu go side by side with Homer, Orwell, and Jane Austen in this examination by a former US Marine officer and teacher of how an officer leads and grows.

Hunting Whitey: The Inside Story of the Capture & Killing of America’s Most Wanted Crime Boss William Morrow, 2020
By Casey Sherman (COM’93) and Dave Wedge

Exclusive access to letters written by the deceased Boston mob boss sheds new light on his years as a fugitive, his capture by the FBI, and his murder in prison in 2018.

Naturalist Duncan McCallum is asked to retrieve a cache of fossils from the Kentucky wilderness and deliver them to Benjamin Franklin in London, but dark forces want to stop him in this mystery set at the dawn of the American Revolution. Thomas Jefferson and Samuel Adams are among the founders
who appear.

A nonfiction look at the early 1990s police investigation of a series of murders of men picked up in New York’s gay bars against the backdrop of the AIDS epidemic.

A psychological suspense novel about a recently widowed mother who thinks she’s found the perfect new man. Or is he a little too obsessed?

A memoir by the acclaimed poet about growing up Jewish in Houston, getting kicked out of his synagogue, and what happened when he returned decades later in the wake of devastating floods.

Poems sketch a room full of women—friends and strangers, humans and goddesses—finding their voices after extreme experiences like violence or illness. Kapur’s poems touch on Hindu mythology, confessions from a hotline for sexual abuse, and a friend’s mortal illness.