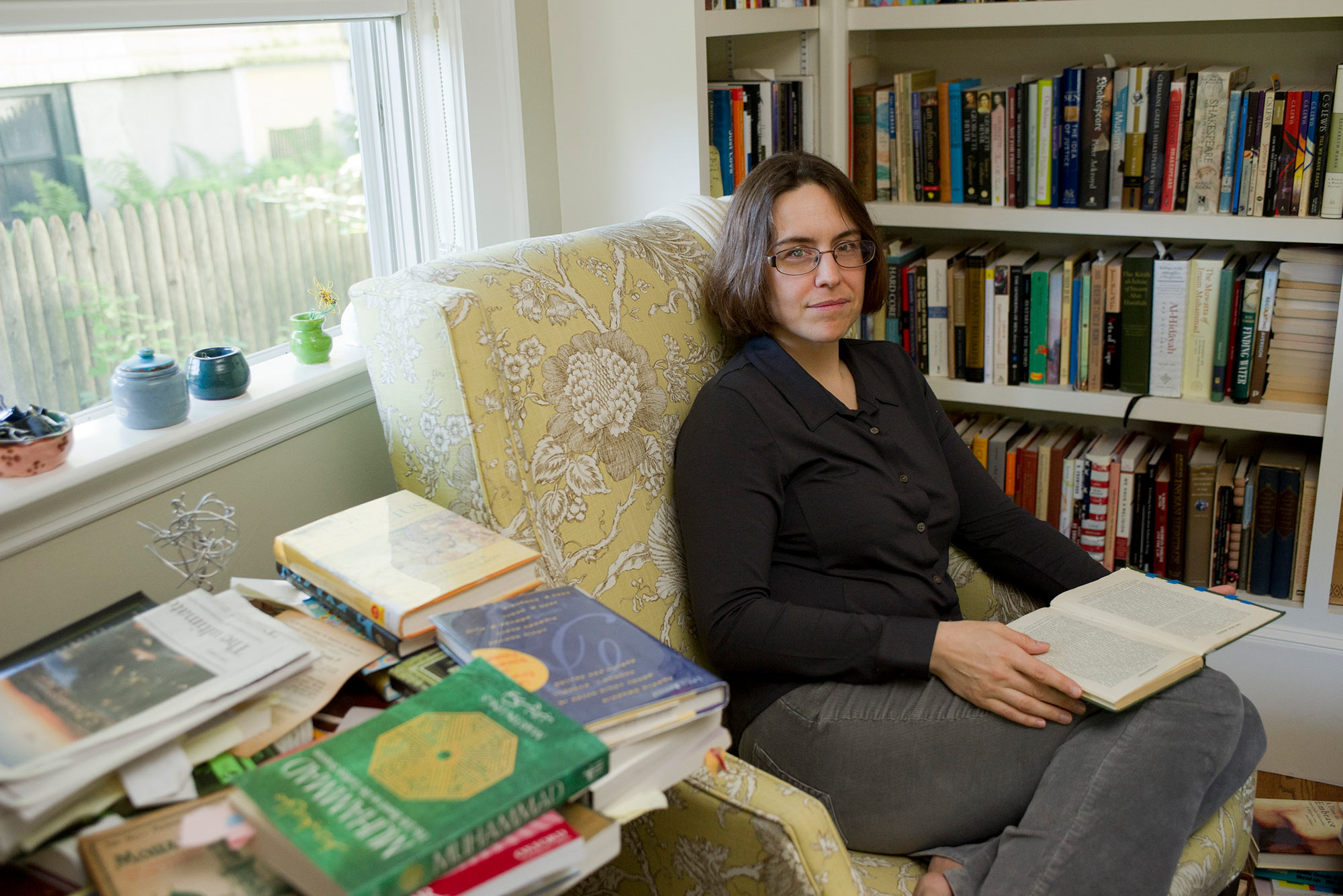 While statistical metrics of gender bias in Islamic studies are hard to come by, Kecia Ali says she’s experienced it personally. Photo by Vernon Doucette

CAS religion professor’s book will focus on discrimination in her field, Islamic studies

Kecia Ali says she’s done scholarship that male colleagues either have ignored or not cited in their later work. The expert in Islamic studies promises to name some names in a book she’s writing for Princeton University Press about gender bias in her field, but she says her experience is no outlier.

“An extensive literature looks at the gendered citation gap in a number of social science, science, and humanities disciplines,” says the College of Arts & Sciences professor of religion, showing that male authors of books and journal articles overlook research and publications by female colleagues. Citation is not the only offense, Ali says: academic conferences and awards can be dominated by men; students often demean women teachers in class evaluations, influenced by gender bias rather than objective quality measure; and one study found scientists scored female job applicants lower than no-more-qualified men.

Bias in the sciences is better documented “because of the use of citation metrics in journals that can be run through algorithmic counts,” she says. Humanities journals, by contrast, “aren’t as well indexed.” So in researching her book, she has to rely on some admittedly “scattershot” techniques—for example, studying one journal’s compilation of its self-proclaimed 15 best articles (14 were by men, even though the overall percentage of male-authored articles was far lower).

Ali prescribes self-awareness by scholars to address the problem. “If you are a white man invited to speak at a conference, you should ask the makeup of the conference before you accept—the people on the program,” she says as an example. “The primary thing is for people to normalize the asking of those questions and the willingness to say, no, I’m not going to publish your all-male edited volume; no, I’m not going to be a respondent to an all-male panel.” And yes, she practices what she preaches, turning down invitations to all-white panels and seeking not to be the only non-male panelist.

BU Today spoke with Ali about gender discrimination in the academy.

BU Today: Is there reason to assume the imbalance documented in the sciences would not be replicated in humanities and social sciences?

Kecia Ali: Anecdotal experience bears out that the gap is likely to exist in the humanities broadly, and Islamic studies specifically. When you open a book and men’s peripheral [scholarship] shows up in the notes, and women’s work that is directly on point doesn’t, there’s probably a problem.

We’re dealing with the historical legacies of how disciplines were formed, who the primary scholars were. Within Islamic studies, a lot of the text-oriented, philological scholarship emerged out of particular times and networks of mostly male scholars—in the United States, in the early and mid-20th century. When we look later in the 20th century, we see somewhat more gender balance. In the study of Islam in America, for instance, we see many more women doing scholarship.

BU Today: So, folks are writing books today that could cite women scholars and they’re not?

Kecia Ali: Who were your advisors in graduate school? What did your reading lists look like for your graduate exams? What do your networks look like, who do you socialize with and interact with professionally? We’re not just talking about citations. We’re talking about [women’s] inclusion in edited volumes, who gets invited to conferences, which is sometimes related—you see people’s scholarship in a volume and then you invite them. So there’s a self-perpetuating pattern.

There’s a prestigious award, the Giorgio Levi Della Vida Award, given by UCLA for scholarship that has contributed lastingly to the study of Islamic civilization. That award has been given out more than 20 times. The first woman to get that award was in 1987. The most recent two recipients, in 2014 and last year, were women. There was a gap between 1987 and 2014. If we look at the conference volumes produced by these events, we have a large majority of male contributors.

Kecia Ali: Correct. In this conference, the person being honored sets the theme of the conference and invites the other contributors. All the volumes honoring men are predominantly male. The volumes honoring women are close to or at parity, even though none of the topics are about women and gender. The explanation that would seem to make sense is that it’s the gender of the scholar that determines the gender ratio of the contributors, rather than the topic.

BU Today: Are men favoring men in these areas because of unconscious, or conscious, sexism?

Kecia Ali: What we have are systemic patterns. The scholar gets asked, who do you want at your conference? And the names they come up with are the people that were in their cohort in graduate school, or who’ve been part of other conferences. We see certain networks being reinforced, and other folks being excluded. People making deliberate choices to exclude—I would think it’s very rarely a question of that.

BU Today: Is citation the root problem in terms of women’s careers?

Kecia Ali: I don’t think you can separate out citations from invitations and from presence on syllabi. Citation is the currency of the realm in academia, but service loads in departments, which have to do with gendered practices around who serves on various committees, who does the work on the committees, what are personal and professional penalties for women saying no to serving on task forces, actually play into women’s ability to do the research and scholarly writing that will enable them to submit to top-tier journals.

It’s not just “academic housekeeping.” It’s an issue of actual housekeeping. We do not yet have a society in which men bear an equal share of domestic and familial care, and these impinge on women’s ability to make their full professional contributions. You have to address disparate service burdens that especially black women bear if you’re going to be thinking about how those scholars make full contributions to the academy.

Kecia Ali to Examine Gender Bias in Academia
1
share this