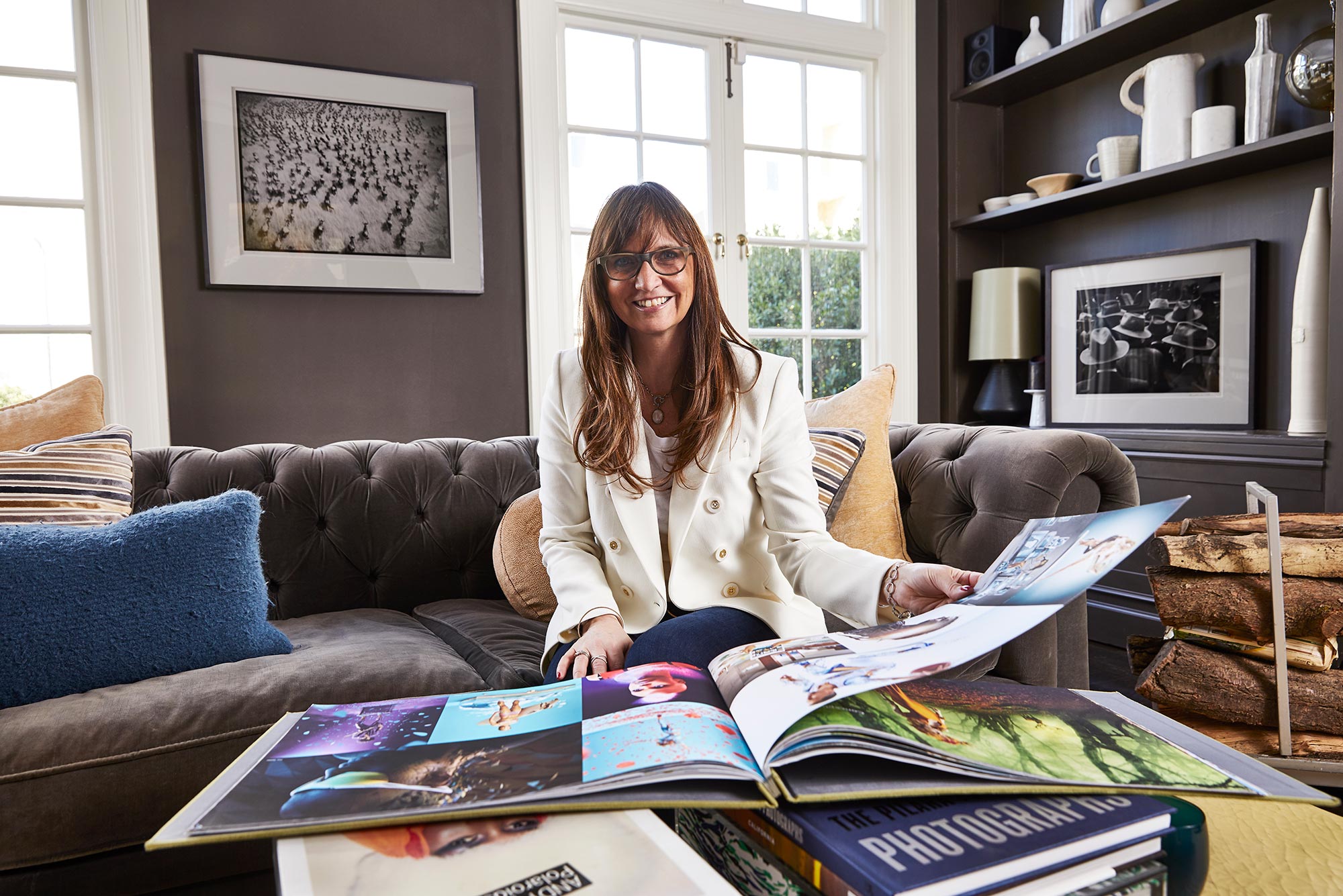 Heather Elder, owner and CEO of Heather Elder Represents, a San Francisco–based agency representing photographers and directors, connects them with advertising agencies and brands across the country. Photo by Gabriela Hasbun

Photos taken with Polaroid’s instant cameras are so synonymous with the 70s that even memories of the time seem to come encased in a little white border. But at about seven bucks for a 10-picture pack of film—adjusting for inflation, the equivalent of more than $40 today—those speedy snaps weren’t cheap.

Heather Elder had a Polaroid SX-70 camera back then, but she had a little more freedom to shoot.

“My father worked at Polaroid for years and he would bring film home,” says Elder (COM’91), now an agent for professional photographers. She was encouraged to play and experiment and says “those experiences informed who I am: I see life through a camera lens, see life in a moment in time.

“I think it’s because I had a camera in my hand early on that I chose photography as my career.”

Elder is owner and CEO of Heather Elder Represents, a San Francisco–based agency representing photographers and directors, connecting them with advertising agencies and brands across the country. She negotiates deals and contracts, showcases photographers’ work and liaises with the agencies and brands, her clients. Elder also runs a blog (notesfromarepsjournal.com) a and podcast (Dear Art Producer) tracking industry trends and sharing the expertise and advice of her peers and agency experts.

Instant cameras might be having a renaissance—Polaroid is selling cameras again—but not much else in the photography industry remains the same from when Elder started snapping. Or from when she started her business in 1995. Helping photographers stay relevant in the age of Instagram and gifs has become an increasing focus for her, both in her work and in her philanthropic support of College of Communication students, whether she’s speaking in class or funding new equipment.

Elder didn’t start out as a photo agent—often called a rep. In fact, she really didn’t want to be one. Her first job out of college was as an account executive at Leonard Monahan Lubars & Kelly, an agency in Providence, R.I. It seemed a good fit. She was from the Ocean State, had learned to love account work during her time with AdLab, COM’s student-run agency, and had the perfect first client: Polaroid.

“We were able to really make a name for ourselves as a small regional agency,” she says. “I got the creative bug, I understood the value of creative. And I started to learn about client service and how important that was.”

When Elder decided it was time to move on, a photographer friend suggested she become a rep—she even knew of a photographer looking to partner with someone.

“I wouldn’t be where I am today—personally or professionally—if it weren’t for my BU education. I credit COM with giving me the perspective to think broadly about solving a communications challenge and being flexible and innovative about how to solve it.”

“I thought, I absolutely do not want to be a rep,” says Elder. “Every time a rep came into the agency, everyone said, ‘Urgh, the rep is here.’ Everyone felt sold. Back then, it was a sales job and that didn’t sound fun to me.

She decided to try it, but to also change what the job could be. Using her advertising experience, Elder built her business by positioning herself as an expert resource to advertising agencies—matching them to the best photographers—and to photographers, being what she calls “a sales and marketing partner who values innovation and evolution.” Soon after starting Heather Elder Represents, she moved to San Francisco and landed right in the middle of a boom.

“There was so much work to go around, so it was a very easy time for me to make a name for myself and to take some chances in how we marketed ourselves,” says Elder. “When the dot-com bubble burst, I had built a roster of photographers and we stayed in business during that time—and I continued to innovate and encourage my photographers to innovate.”

Some of that innovation was forced by external changes to the market.

“The traditional sales rep, where you take someone’s portfolio, knock on a door and get a job, has mostly gone away,” Elder says. In the past, agencies would send a layout for an ad and ask for a photographer to put their own spin on the image, she says. Now, agencies want photographers to create libraries of photos—and cinemagraphs and short films—for not just traditional ads, but Instagram stories or TikTok campaigns. Reps still have to promote their photographers and showcase their work—whether it’s through networking, social media, or portfolio shows—but they also need to work with them to figure out how images might be used as a campaign moves from one media format to another.

“Our industry has turned upside down,” says Elder. “Clients and brands are looking for more content than they ever have. We have to understand all the different channels the content can live in—we’ve gone from a single image to creating multiple forms of content. The photographers have to be a partner in a way that they never were before.

“What I can bring to a photographer—along with helping them with strategic positioning, setting business objectives, and crafting marketing plans—is an understanding of a dynamic industry and how they can stay relevant.”

Participating in the Future

Sharing that knowledge and expertise is one of the reasons Elder started her blog, which now also highlights her podcast. She’s produced posts and podcast episodes on social media branding, working with creative directors, and computer-generated imagery. Elder has also spoken to a COM class about how her job and advertising have evolved—and still are.

“People are going to be looking to them to help determine what the next age of advertising is like,” she says. “I told them, ‘You need to speak up, you need to participate, you need to have a point of view, because the industry is looking to figure out what it’s going to become.’”

Returning to COM turned into something of a family moment for Elder. Her daughter, Casey (CGS’19, COM’21), was part of the class and her own mom traveled up from Rhode Island. “It was an awesome experience for me,” Elder says. It came at a time when she had decided to become more involved in her alma mater. She and her husband, John, CEO and cofounder of the creative agency Heat, have long supported COM, but recently stepped up their giving to contribute to the College of Communication and Student Life Funds.

“I wouldn’t be where I am today—personally or professionally—if it weren’t for my BU education. I credit COM with giving me the perspective to think broadly about solving a communications challenge and being flexible and innovative about how to solve it,” Elder says. “I feel like BU has stayed true to its core values about what’s important to them. I know technology has changed and classes have evolved, but what I took away from my experience at BU and what Casey is taking away are very similar.

“I see Casey learning how to live her life as an adult, and I love that BU provides the opportunities and it’s up to you to take advantage of them.”

There are 2 comments on Shifting Focus