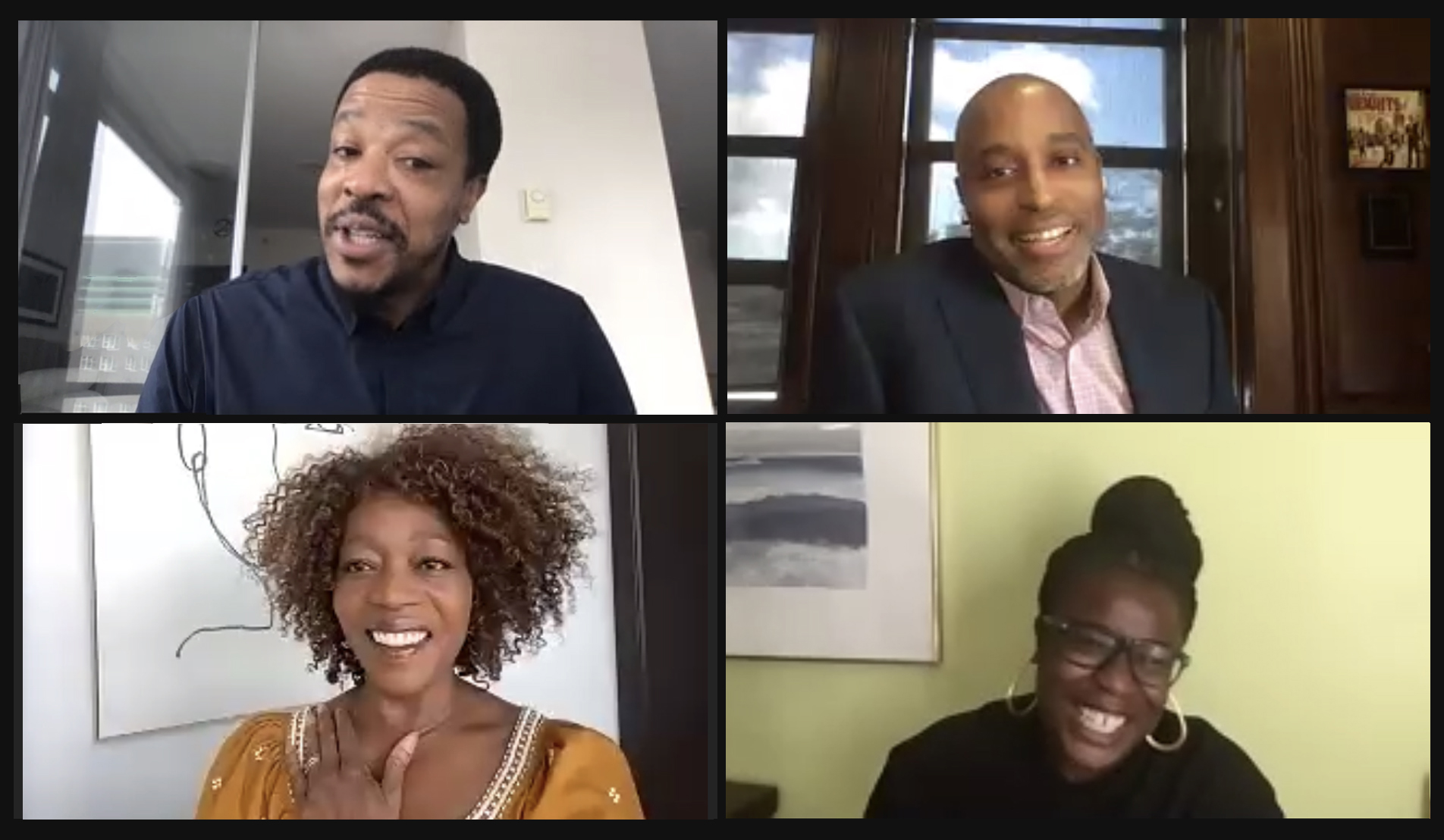 During the Alumni Weekend event Black in the Entertainment Industry: Reflections on Courage, Challenge, and Creativity, College of Fine Arts Dean Harvey Young (clockwise from top right) spoke with actors Uzo Aduba (CFA’05), Alfre Woodard (CFA’74, Hon.’04), and Russell Hornsby (CFA’96) about their experiences at BU and in Hollywood.

Trivia, music performances, virtual 5K were among the online events

Alumni Weekend moved online this year because of the COVID-19 pandemic, and as a result, alumni, faculty, staff, and current students participated in a variety of free programming from the comfort of their homes. Over six days, from September 29 through October 4, alumni from around the world reconnected over events like a virtual 5K race, a cooking demo, and trivia nights.

More than 5,000 people registered for this year’s programming, which
also included a concert featuring School of Music student ensembles and soloists, a poetry reading and music performance by US poet laureate Joy Harjo, and a wine tasting with a certified master of wine.

All week, the BU Alumni Association hosted Tastes of BU: Around the World, which encouraged participants to support alumni-run food businesses and post pictures of the drinks and dishes they purchased on Instagram with the hashtag #tastesofbu. Some of the eateries showcased in posts over the week were Pavement Coffeehouse in Boston, Mass., run by Lawrence Margulies (CAS’97); Shy Bird in Cambridge, Mass., owned by Andrew Holden (SHA’03); Spinnaker in Brewster, Mass., co-owned by Andrea DeSimone (CFA’00); Farmhouse Evanston in Evanston, Ill., founded by Molly McCombe (Questrom’87); and Coffeehood in Tangerang, Indonesia, owned by Jonathan Hermijanto (Questrom’10).

Black in the Entertainment Industry: Reflections on Courage, Challenge, and Creativity was a conversation led by College of Fine Arts Dean Harvey Young with actors Alfre Woodard (CFA’74, Hon.’04), Russell Hornsby (CFA’96), and Uzo Aduba (CFA’05) about their experiences at BU and in Hollywood. Emmy-winner Woodard has appeared in the television series Hill Street Blues, Desperate Housewives, Empire, and Luke Cage. She voiced Sarabi in 2019’s live-action adaptation of The Lion King and won critical acclaim for her portrayal of a prison warden in the 2019 film Clemency. Aduba’s turn as Suzanne “Crazy Eyes” Warren in Netflix’s Orange Is the New Black earned her two Emmys. She recently won her third Emmy for playing Shirley Chisholm in FX’s Mrs. America. Hornsby is best known for his roles in the television shows Lincoln Heights and Grimm, and the 2018 film The Hate U Give.

Early in the conversation, Young asked the actors about how they approach playing roles honestly and authentically. “It starts with understanding and knowing who I am as a person, as a human being, as a man, as a Black man—all of those things,” Hornsby said. “My feeling has always been that there are very few true chameleons in this business. Every character that we take on is a reflection of who we are.”

Aduba, who wore a T-shirt with Breonna Taylor’s name on it when she accepted her recent Emmy Award, later discussed being involved in activism as a famous actor. “When it came to wearing that shirt, we were living in a time where we were 100-plus days past any kind of acknowledgement of a woman who died in her bed, in her sleep, in a way that I believe was wrong. And I think if you don’t stand for something, you’ll fall for anything,” she said. “I don’t want to ever look back on my life and say, ‘I wish I had.’ There are times that are scary to speak up or do that hard work, but if it’s your truth and that’s what you know, then you have to bring it out. That channels into my work as well, in terms of the kind of work I want to be a part of. The stories I choose are often the stories of the missing. I don’t mean that just from a historical point of view, I mean it as ‘What story do I feel like I have not seen someone like myself [in]?’” Aduba said she hopes that she motivates other aspiring actors of color to realize their potential. She thanked Woodard, who, she said, was someone who inspired her.

Woodard then reflected on her time as a young actor at BU and how much has changed since. Her generation didn’t see the same kinds of acting roles for Black women as Aduba has seen, she said. “We weren’t trailblazing as much as we were just hacking through the bush,” Woodard said. “So I’m just so glad that there was something that we gave off that kept you company as a young brown girl having dreams.”