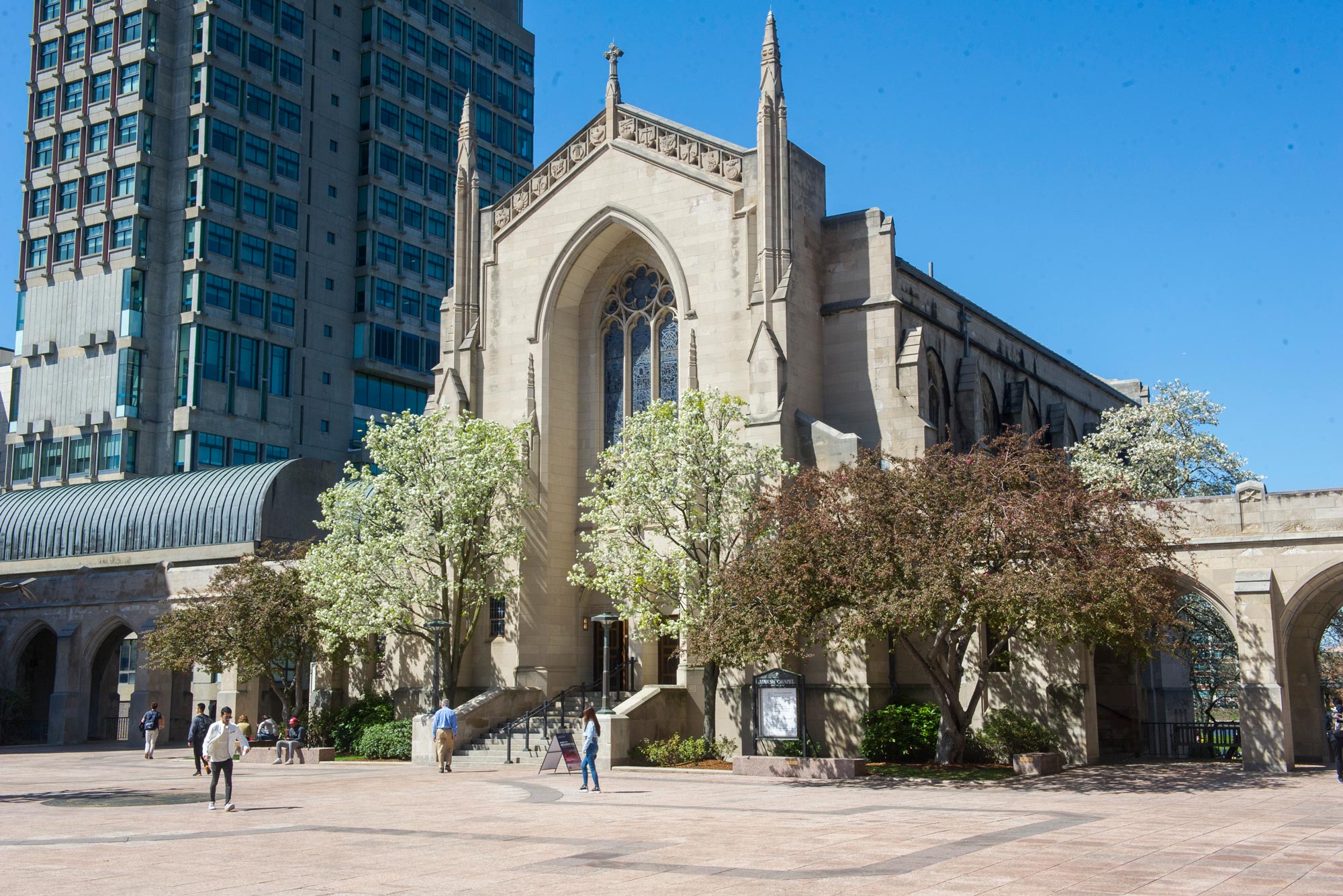 Several members of the Charles River Campus faculty have been promoted to full professor. Photo by Adele Bertschy

Leaders in their respective fields, they are “forging multidisciplinary collaborations to discover solutions for some of our most pressing challenges”

A specialist in mathematical neuroscience employing various mathematical techniques to produce new discoveries in the study of diseases such as Alzheimer’s, a researcher dedicated to studying orangutans and great apes (with a focus on how primates are coping with environmental changes), and a developmental psychologist  studying the development of youth and adults with autism are among the Boston University Charles River Campus faculty recently promoted to the rank of full professor.

“The individuals we recognize have emerged as leaders in their respective areas of research and in their classrooms and laboratories,” says Jean Morrison, BU provost and chief academic officer. “They are forging multidisciplinary collaborations to discover solutions for some of our most pressing challenges, authoring foundational texts that help advance our understanding of the world, and working to inspire a new generation of young scholars and professionals. In doing so, they exemplify each day the excellence and impact of Boston University’s talented academic community.”

Linda Doerrer, College of Arts & Sciences professor of chemistry, designs, studies, and synthesizes novel inorganic compounds that can improve sustainability by reducing industrial waste and the impact of harmful algal blooms. A past Fulbright Fellow and a recipient of the BU Undergraduate Research Opportunities Program’s Outstanding Mentor Award, she has published a book chapter and over 70 widely cited research papers in leading chemical research journals. She is a member of the editorial advisory board of Inorganic Chemistry, and her current research is sponsored through grants from the National Science Foundation and the American Chemical Society.

Abigail Gillman, CAS professor of  Hebrew, German, and comparative literature, is a scholar of Jewish literature and culture of the German-speaking world, with focuses on Kafka, Freud, Mendelssohn, Schnitzler, Israeli film, and Holocaust memory and monuments. She has published two books, most recently, A History of German Jewish Bible Translation (University of Chicago Press, 2018), six book chapters, four book reviews, and numerous essays—among them, a 2015 work on philosopher Martin Buber, which received the Egon Schwarz Prize for Outstanding Essay in German-Jewish Studies.

Cheryl Knott, CAS professor of anthropology, examines orangutan and great ape physiology and behavior, focusing on how primates cope with environmental changes—particularly those resulting in fluctuating food availability. She is a National Geographic Emerging Explorer, has authored dozens of book chapters and journal articles chronicling her research, and is a frequent keynote speaker at conferences and other forums on orangutans, great apes, and rainforest conservation. In 2017, she received the Orang Utan Republik Foundation’s Pongo Environmental Award for ongoing conservation efforts in Borneo, Indonesia.

Mark Kramer, CAS professor of mathematics and statistics, specializes in mathematical neuroscience, incorporating techniques from network theory, differential equations, and statistics to produce new discoveries in the study of epilepsy and Alzheimer’s disease. A 2015 NSF CAREER Award recipient, he has secured significant additional funding from the National Institutes of Health to support his work and has been lauded for his efforts in identifying a dynamical mechanism that controls the termination of seizures in humans. He has published a book, a book chapter, and dozens of articles in top scientific and mathematical journals, and is a Journal of Neuroscience Methods editorial board member.

Cathal Nolan, CAS professor of history, is a military historian whose work chronicles multiple eras of armed conflict—and subsequent technological and societal advances—from 11th-century religious battles to World War II. He is the director of BU’s International History Institute and has written three books, the most recent, The Allure of Battle: A History of How Wars Have Been Won and Lost (Oxford University Press, 2017), received the Gilder Lehrman Prize for Military History. A frequent international lecturer, he has been interviewed by numerous news media outlets and consults on military history for the PBS series NOVA.

Merav Opher, CAS professor of  astronomy, combines modeling, model applications, and simulations to explore how plasma and magnetic effects reveal themselves in astrophysical and space physics environments—in particular, the interaction of stars, the solar system, and extrasolar planets with surrounding media. Supported with major grants from NASA, she is a past recipient of a NSF CAREER Award and a Presidential Early Career Award for Scientists and Engineers, has published numerous papers in top field journals, and is an editor for Geophysical Research Letters.

Zhongjun Qu, CAS professor of economics, studies econometrics, researching a variety of topics, including structural changes in one or more equations, estimates of the long-memory parameter in the presence of level shifts, and adjustments to improve the finite sample performance of stationarity and cointegration tests. His expertise spans series, cross-section, and applied econometrics, and he has published numerous articles in premier economics journals. His teaching and mentoring have been recognized with the BU Graduate Economic Association’s Advisor of the Year award.

Nancy Smith-Hefner, CAS professor of anthropology, is a linguist and anthropologist whose research explores language, gender, religion, and sexuality studies in Southeast Asia, most recently focusing on the experiences of Muslim Javanese youth. A frequent presenter at international conferences, she has published extensively in leading scholarly journals and authored or coauthored three books, including Islamizing Intimacies: Youth, Sexuality, and Gender in Contemporary Indonesia (University of Hawaii Press, 2019). Among current projects are a volume due out from Routledge later this year on gender, education, and global delays in marriage and a handbook on gender in Southeast Asia .

Ian Sue Wing, CAS professor of earth and environment, uses econometric techniques to study how energy systems affect climate change and how climate change in turn affects agricultural systems, water sources, and technological change. He is a past Rhodes Scholar, has received numerous federal, state, and private grants to support his climate research, and has published two books, nine book chapters, and dozens of articles in leading journals of economics, science, and technology.

Maciej (Matthew) Szczesny, CAS professor of mathematics and statistics, works at the nexus of geometry, algebraic geometry, representation theory, and mathematical physics—particularly in the areas of vertex and Hall algebras and the algebraic geometry over F1. His most recent work is in the new area of factorization algebras. A regular speaker at international conferences (including a lecture series he led at Trinity College in Dublin), he is considered among the discipline’s leading innovators for seminal contributions in field theory and gauge theory. He has also published over 25 articles in premier mathematics journals.

Evimaria Terzi, CAS professor of computer science, specializes in data mining, focusing on algorithms for extracting useful knowledge from massive datasets. A well-known authority on privacy in social networks (the subject of a book she coauthored), she has published dozens of widely cited conference papers and journal articles, received a Microsoft Faculty Fellowship and an IBM Outstanding Award, and secured several grants from Google, Yahoo, and the NSF (including a CAREER Award) to support her data-collection research.

Alice Tseng, CAS professor of history of art and architecture, is a scholar of Japanese art and architecture, with particular focus on the 19th and 20th centuries—from institutional buildings, collections, and exhibitions to the role of the visual arts in cultural transformation. She has received fellowships from the Fulbright Foundation, the National Gallery of Art, and the J. Paul Getty Foundation, among others, and published three books, most recently, Modern Kyoto: Building for Ceremony and Commemoration, 1868-1940 (University of Hawaii Press, 2018). Her current research examines the visual and spatial representations of Japan’s modern emperors.

Sean Andersson, College of Engineering professor of mechanical engineering, specializes in dynamics and controls, using single-particle tracking, scanning probe microscopy, and robotics to advance new applications for technologies in real-world environments and living systems. A recognized leader in the field of atomic force microscopy, he is a senior member of the IEEE, a past NSF CAREER Award winner, and has published two book chapters and nearly 100 articles in premier scholarly journals, including International Journal of Molecular Sciences and Applied Physics Letters. His current work is supported by major grants from the NSF and the NIH.

Vivek Goyal, ENG professor of electrical and computer engineering, is an expert in signal processing, computational imaging, information theory, and human decision-making. His most recent research has centered on computational periscopy, using a standard camera and advanced mathematical modeling and computational techniques. A recognized leader in the field of single-photon image analysis, he is an IEEE Fellow and past NSF CAREER Award winner, holds 19 patents, and has published two books, four book chapters, and dozens of widely cited papers and articles in leading journals, including Science and Nature.

D. Lynn O’Brien Hallstein, College of General Studies professor of rhetoric, specializes in communication and motherhood studies, researching various ways that contemporary motherhood is constructed rhetorically through popular culture. Recognized as among the formative voices in her field, she has published seven books, examining subjects from reproductive choice to the influence of celebrity culture on body perception. Last year, she was lead coeditor for the Routledge Companion to Motherhood. She has also written more than 40 journal articles, book chapters, and encyclopedia entries, and presents regularly at national and international conferences.

Gael Orsmond, Sargent College of Health & Rehabilitation Sciences professor of occupational therapy, is a developmental and clinical psychologist who researches the development of youth and adults with autism, with particular focuses on family, social, community, and school contexts. She is Sargent College’s associate dean of academic affairs, a fellow of the American Psychological Association, and serves on the editorial boards of Autism: The International Journal of Research and Practice and American Journal on Intellectual and Developmental Disabilities. She has published four book chapters and dozens of journal articles. Her current research is funded by the US Department of Education’s Institute of Education Sciences.

Andrew Shenton, School of Theology professor of music, is a choral conductor, organist, and internationally recognized scholar of composers Arvo Pärt and Olivier Messiaen. He is the STH James R. Houghton Scholar of Sacred Music, directs the Master of Sacred Music degree offered jointly through STH and the College of Fine Arts, and directs STH’s Religion and the Arts Initiative. He has recorded multiple award-winning CDs and published nine book chapters, four encyclopedia entries, and three books, including Arvo Pärt’s Resonant Texts: Choral and Organ Music 1956-2015 (Cambridge University Press, 2018). He also is artistic director of the Boston Choral Ensemble.

Beth Warren, Wheelock College of Education & Human Development professor of language and literacy, is an expert on designed learning environments at the intersection of culture, language, and learning in disciplinary literacies (including the sciences and humanities), with the goal of expanding possibilities for children in historically marginalized communities. Widely recognized as among the field’s pioneering voices, she is director of Wheelock’s Earl Center for Learning and Innovation and has published three books and dozens of journal articles, as well as  book chapters on human learning. Her research has been supported extensively through grants from the NSF, the US Department of Education, the Ford Foundation, and most recently, the James S. McDonnell Foundation.