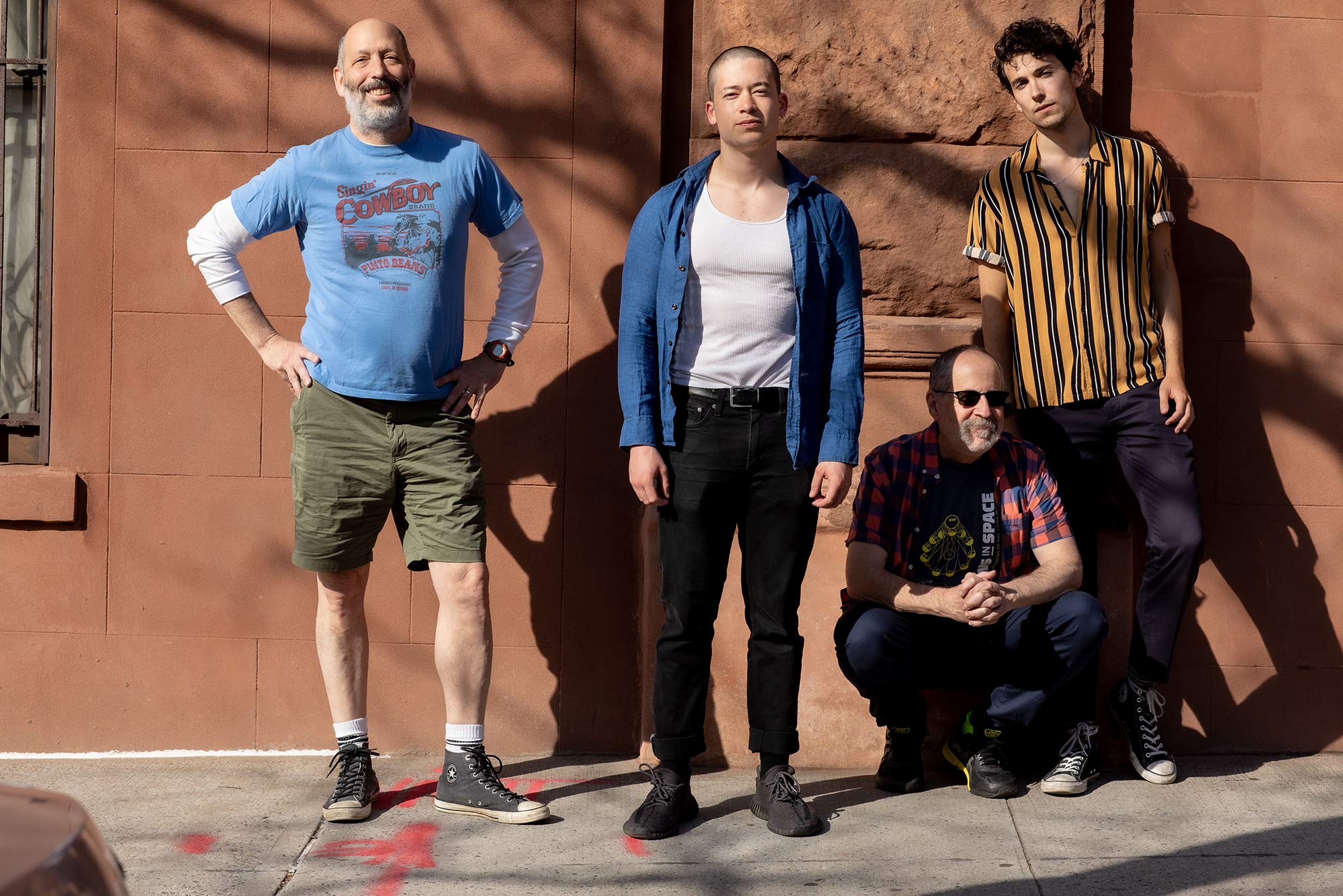 When Life Gives You a Pandemic, Make a Sitcom

Amidst COVID-19, CFA student’s The Social Distance mines his own life for laughs

Julian Shapiro-Barnum’s life in quarantine is the stuff of a sitcom: a son (him in this case) forced by COVID-19 to return home from studying abroad in Madrid, a friend unable to fly home and needing a place to stay, two somewhat cantankerous dads (one recovering from coronavirus), all living together in an 1,100-square-foot apartment in Brooklyn’s Park Slope neighborhood.

Struck by the humor in all this, Shapiro-Barnum (CFA’21) has turned it into a seven-episode talk show and sitcom called The Social Distance, written and directed by him. (The format of the first four episodes is a talk show, the last few are scripted comedies, a shift he says just happened organically.)

Shapiro-Barnum stars in the show, along with family members and friends, including his BU roommate, theater major Quentin Nguyen-Duy (CFA’20). The show is filled with topical jokes about coronavirus, social distancing, and Shapiro-Barnum’s stress dealing with his actors. Fans of quirky comedy will appreciate its 30 Rock and Unbreakable Kimmy Schmidt vibes (there are puppets! and songs!).

The first episode was released March 21, and the seventh and final episode is slated for release next Wednesday, June 3. Between YouTube and Instagram, each has garnered about 1,500 views, and the show begins airing virtually on the off-off-Broadway theater The Tank website in June, Shapiro-Barnum says.

“The show has been a departure from reality and a coping mechanism, given me something to do, a way to understand things through comedy, which is how I feel I deal with a lot of stuff,” Shapiro-Barnum says. “My life started to feel like a sitcom, all these ridiculous things were happening, we were all trapped together, and the stuff that was happening in the house was either too sensitive or didn’t translate, but I wanted to use that energy and vibe.”

He believes that when it first started airing, The Social Distance was the first quarantine-themed talk show or sitcom. Now Netflix has an anthology series, Social Distance (the names are a coincidence), created by the team that produced Orange Is the New Black.

The College of Fine Arts theater major got the idea for The Social Distance after watching The Late Show with Stephen Colbert just as the quarantine period was starting (“when everything was falling apart,” he says) and decided to do his own version. He felt his own family dynamic at that moment was ripe for dramatization. Besides having a dad with coronavirus (he has since recovered), they had a new roommate when Nguyen-Duy found himself stranded in New York. He’d come for CFA’s annual senior Theatre Showcase and stayed with the family. But when New York Governor Andrew Cuomo ordered a travel ban, Nguyen-Duy couldn’t fly home to Ohio. He originally planned to stay for only a week, but it turned into two months.

Shapiro-Barnum started working on a script, staying up all night and workshopping it with one of his moms (more about that later), who had some suggested rewrites. The next morning, Nguyen-Duy woke up around 10, surprised to see his friend up and dressed and working at his computer. “He’s a creative guy like that—always working hard on some ambitious project or another,” Nguyen-Duy says. “I think I grunted something and poured a cup of coffee and then fell back asleep. That evening, we shot the first episode.” The show was quickly edited and up two days later, and has since received 2,000 views.

When he originally pitched the idea to his dads and Nguyen-Duy, they weren’t thrilled. “When we started, my dad [Michael Williams] had coronavirus, so he wasn’t even in it,” Shapiro-Barnum says. “After the first episode, my dad Lorin [Sklamberg] was so negative—the show wasn’t his kind of humor. But once I posted it to social media, my friends and his friends became obsessed with him on the show as a character, and I think my other dad wanted to ride the same wave.” Everyone started to cooperate.

He admits being the director wasn’t always easy, semi-jokingly calling his dads divas. He made a shooting schedule and they would try to incorporate their own suggestions or jokes. The two also didn’t memorize the scripts, so Shapiro-Barnum had to read them the lines and film each one individually, then edit together.

Nguyen-Duy says Shapiro-Barnum is a down-to-earth director. Midway through shooting, he started leaving schedules in the living room so the other three knew what time the shoots started. “I think we all tried to be good sports about it, and it usually fell after dinner or early mornings,” Nguyen-Duy says. “We would be on our way to the weekly grocery run, and he would say, ‘Stop! Look at the camera, and say something really angry!’ Or we would be perusing Fifth Street and he would say, ‘Quentin, put this pencil mic in your hand, and go interview that angry guy over there!’ And I would always say yes, and it wasn’t until the final episode was edited that I would see why I did those types of things.”

Shapiro-Barnum is open about his home life and family dynamics: in episode six he talks about his upbringing in Brooklyn and Philadelphia with five parents. In the ’90s, he explains, two of his moms wanted to have a baby, so they asked their friend Michael for a cup of sperm. He and his boyfriend, Lorin, have since married. The four of them decided to coparent, and then when their son was two, his moms broke up and met other women, and that’s how his third mom came into his life.

Shapiro-Barnum is interested in playwriting and comedy, and he’s also an accomplished puppeteer. He’s appeared on the Netflix show Garfunkel and Oates and on Sesame Street, and he says that puppetry has long been a way for him to express his artistic ideas. This summer, he’s working for a puppetry Zoom camp and co-running a virtual gallery called The 98 art collective with classmate Mallika Chandaria (CFA’20).

He says the positive feedback for the show has been a pleasant surprise. “I’m not making fun of [the pandemic], I’m making fun with it and what’s happening. I didn’t really expect all this appreciation, since people put art and videos out on the internet all the time.”

He’s been told, he says, that “this is one of the few positive things about coronavirus and quarantining. People have said they need to be able to laugh about this, and this show allows them to do that.”

When Life Gives You a Pandemic, Make a Sitcom

There are 3 comments on When Life Gives You a Pandemic, Make a Sitcom

When Life Gives You a Pandemic, Make a Sitcom
3
share this