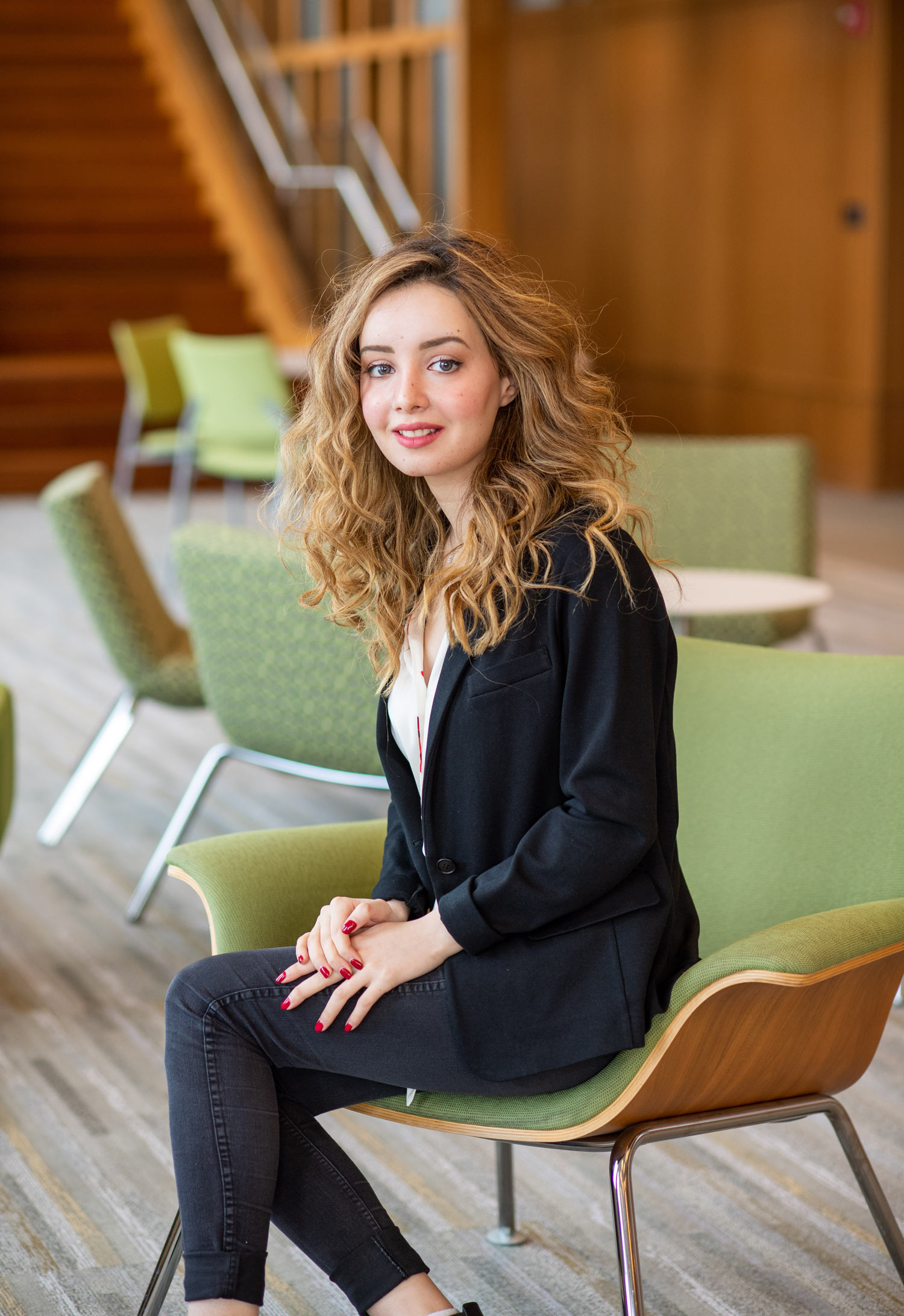 Firangiz Gasimova (CAS’19) launched the digital magazine Hayat Life in 2019 and is its editor in chief. Hayat means “life” in Arabic. Photo by Cydney Scott

Celebrating the World of Cultural Muslims

As a BU student, Firangiz Gasimova, a native of Azerbaijan, often faced a singular kind of question, asked different ways, from American friends and classmates. At a party, it might go like this: You’re not drinking, are you? At a pizza lunch, the question might be: Are you allowed to eat pork?

She realized they were making assumptions about her based on the predominantly Muslim country where she grew up. “My country is very secular,” says Gasimova (CAS’19). “I eat pepperoni pizza all the time in my country. No one ever told me, wait, can you do this? Here, there’s no perception of cultural Muslims.”

She began thinking a lot about the assumptions people make. “I feel like it’s stereotyping,” she says. “If a person is Catholic, no one has this preconceived notion of what they’re allowed to do and what they’re not. But if I say I’m Muslim, it will be different.”

Gasimova says the comments don’t upset her. She finds them intriguing, and they inspired her to do something. Last July, she launched Hayat Life, a digital magazine that celebrates the world of cultural Muslims in the areas of lifestyle, culture, the arts, business, and innovation. (Hayat means “life” in Arabic.)

We want [the site] to be about what they’ve done. That’s our agenda. And to educate people—you can be a cultural Muslim and look like this.

She gathered a small team, including Nicola Young (GRS’19), Metehan Tekinirk (GRS’22), and Michelle Ramiz (Pardee’21), and together they brainstorm, research, and write short profiles of people like Ramy Youssef, the stand-up comedian, actor, and writer who won a Golden Globe this year for his hit Hulu show Ramy, Hoda Kotb, coanchor of the Today show, Omer Ismail, a partner at Goldman Sachs and head of the firm’s US consumer business, Rita Ora, a singer-songwriter and an actor, and Ramin Djawadi, who composed the music for HBO’s Game of Thrones.

“Some of them are inspired by their heritage, some are not,” says Gasimova, who is editor in chief. “But it’s all about their success stories…. We want [the site] to be about what they’ve done. That’s our agenda. And to educate people—you can be a cultural Muslim and look like this.”

Gasimova grew up in Baku, the capital of Azerbaijan. She came to the United States for the first time as an eighth grader, staying with a host family in Washington, D.C., for a summer to study English. In ninth grade, she was accepted into the US Department of State’s Future Leaders Exchange (FLEX) Program, which provided a scholarship for one academic year in the United States. She lived with a family in the small town of Johnsonburg, Pa. It was a culture shock she hadn’t felt during her three months in the nation’s multicultural capital. But she threw herself into the experience, becoming a cheerleader, hanging out with friends.

This fall, Gasimova will attend the London School of Economics, to study political theory. Fluent in Azerbaijani, Russian, and English, she’s thinking about a career in diplomacy. But she’ll continue working on Hayat Life, which has received funding from nonprofits, including the Boston Foundation.

Besides showcasing cultural Muslims and celebrating individuality, Gasimova hopes the site will “introduce people to that concept challenging the common perception presenting Muslims as a monolith,” she says. “Hayat Life is strictly apolitical. The point of our site is that cultural Muslims like me are everywhere. I believe in showing rather than telling, so I created this website to drive that idea home.”

Celebrating the World of Cultural Muslims

There are 4 comments on Celebrating the World of Cultural Muslims