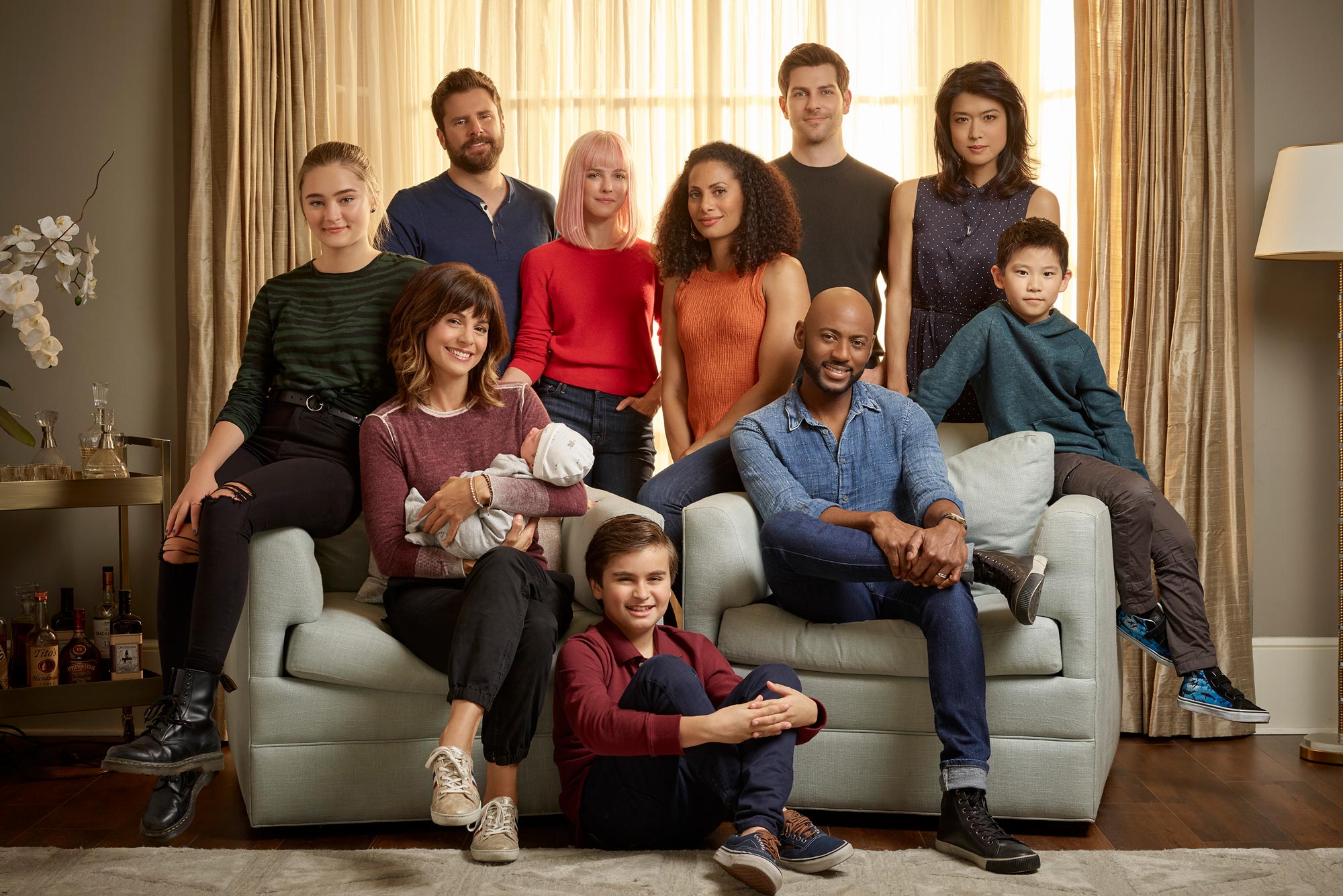 Showrunner DJ Nash talks about how the series came to life

Do you consider yourself a #Millionaire? That’s the nickname and hashtag that fans of the ABC drama A Million Little Things have adopted, and if you count yourself among them, you’ll be happy to learn that the show’s cast and its creator, DJ Nash, are coming to the Howard Thurman Center for Common Ground Thursday night, March 5, for a BU-only screening of the latest episode (“Change of Plans”), followed by a Q&A.

Tickets to the event are sold out, but there is overflow seating available inside the Thurman Center, recently relocated to 808 Comm Ave. With five times the square footage in its new home, the center has been able to expand the scope and breadth of its programs.

Premiering in September 2018, A Million Little Things is about a group of friends living in Boston who reunite after their de facto leader dies by suicide. Now nearing the end of season two (and awaiting news of renewal for a third season), the show has been favorably compared to the NBC megahit drama This Is Us, for its similar use of twists, flashbacks, and multiple storylines. The second season, which wraps March 26, has dealt with, among other plotlines, a widow who’s raising her children and about to have a baby with the man she was having an affair with, a couple weighing whether or not they want children, and another couple battling cancer together.

A Million Little Things has been recognized for its willingness to tackle complex issues, like mental health and sexual orientation; last May, the Television Academy honored the show’s writers for creating stories involving tough conversations handled “with poise and honesty, providing numerous fictional examples of countless real-life stories.” The show, the academy noted, works “towards breaking the existing stigmas around mental health, continuing the many conversations already being had, and hopefully, starting more that are waiting to be had.”

Prior to the Thursday visit, BU Today spoke with A Million Little Things creator and showrunner DJ Nash, who wrote the series’ pilot in a mall food court and got his start in stand-up comedy. Nash is a native of nearby Newton, Mass., and attended Milton Academy and Brown University.

BU Today: How did the show come to be set in Boston?

Nash: I grew up nearby, went to area schools, and I am a huge Red Sox and Bruins fan. The show was going to be set in LA, it was going to be called the Kings of Los Angeles, but in that version, Jon Dixon [Ron Livingston, who dies by suicide in the first season] was going to be a theatrical agent. But I wanted him to be a real estate agent. My dad and I grew up going to Bruins games together, so I moved the show to Boston, and Boston became like the eighth character on the show.

Have you done any shooting in the area?

We talked about shooting the pilot in Boston, but it was February or March, and we were worried about hitting snow. We shot in Vancouver instead, and fell in love with the crew up there, and it really doubles very well for Boston.

Why did you want to visit BU?

My wife [Young Mi (CAS’95)] went to BU—she loves BU. I said I’m going to get so much street cred at home—home cred, is that a thing? We have been wanting to visit the area, and when it didn’t work out during the first season, I said, let’s take the whole cast to Boston, since the show takes place in Boston. I want to show them my hometown. This whole tour is built around this BU night. It also includes us hitting some of the places in the show that I reference, so the cast can see them firsthand.

There are just a few episodes to air before the season finale. Can you talk about the one you’ll be screening at the Howard Thurman Center?

Episode 16 (“Change of Plans”) airs on Thursday. They’re all great episodes, but this one is great because there is a lot that happens and there is a really moving story about domestic violence. Michelle Leibel and I wrote the episode, and a lot happens for our gang. It has a very moving story with a character we introduced, Eve, who is the potential birth mother for Rome and Regina. We learn she has been the victim of domestic violence and her boyfriend threatens to come back. At the end of episode 15, which ran last week, he returns.

Where did you get the idea for the show?

A few years ago I had a friend who took his life, and on paper we were very similar: loving dads, loving husbands. We had run into each other a couple of weeks before, and we both lit up, promised to have lunch with each other. And then he took his life. I don’t think for a second that our lunch could have saved him, but I think, I could have had one more lunch. His death was really impactful on me. It made me reevaluate life.

The show is about a group of friends who aren’t living the version of life they thought they would be living. Their friend’s death is really a wake-up call to change, and that’s really what my friend’s death did for me. When I was at the memorial, I was trying to figure out how our endings could be so different when our lives were so similar.

Was one of your goals for the show to start a discussion about mental health?

When we were gearing up for the series before it started airing, Anthony Bordain and Kate Spade took their lives the same week. It really affected us in the writers room, because the idea that we could lose two high-profile people in the same week told us this is an epidemic. We thought, we really have an opportunity here to further a conversation that has needed to take place for so long. I didn’t intend to do that when writing it, but now that it’s on, now that we are in our second season, there are people who have reached out to us and said, “I couldn’t explain to my parents what I’m going through, and I showed them an episode and said, ‘This, what Rome is dealing with [depression], that’s what I have.’” There are other people who have seen the episodes where we have aired the help line, and it’s saved their life, they told us.

To this day, I don’t make that the goal of the show, but I’m obviously very aware of it. It’s incredibly powerful. My roots are in stand-up, and I don’t know if my stand-up ever saved lives. But the idea that this is affecting people in really positive ways and giving them the courage to get the help they deserve has been life-changing for me. Having lost a friend to suicide, there’s nothing I can do to bring him back. But the idea that maybe other people won’t lose their friends to suicide has meant everything to me.

How do you approach the delicate balance of mixing sadness and humor in the show?

In life, just when you think you can’t take anymore, if the world gives you a reason to laugh, you just have to be open to it. I have found in my life that when I’m struggling and just trying to endure the most pain, something silly or ridiculous happens. At my friend’s funeral, we laughed. I don’t think there needs to be a time when they are mutually exclusive. By design, we try to have the most dramatic moments and the most humorous moments butt up against each other. There is an episode we did last season where Gary is telling Maggie that he slept with Ashley, and as that’s happening, he tells her he loves her, and she throws up on him. He realizes she has cancer. There are no rules. With this cast, it’s been amazing, because in the same moment they can play the drama and the comedy. I haven’t given them anything so far that they haven’t been able to do.

What can we expect from the rest of the season? Any hints?

You will be shocked at what happens. Each character’s storyline has incredible, life-changing things happen. While I thought our first season finale was a cliffhanger, this finale will dwarf it.

The latest episode of A Million Little Things, “Change of Plans,” will be screened tonight, Thursday, March 5, at 6 pm, in the Howard Thurman Center for Common Ground, 808 Commonwealth Ave. A Q&A session will follow with creator and showrunner DJ Nash, cast members David Giuntoli, Allison Miller, Christina Moses, Stephanie Szostak, Grace Park, and James Roday. Tickets are sold out, but there will be an overflow area streaming the discussion. The event is open to Boston University students, faculty, and staff.

There is 1 comment on Creator and Cast of ABC’s A Million Little Things Visits BU Tomorrow, Will Screen Latest Episode