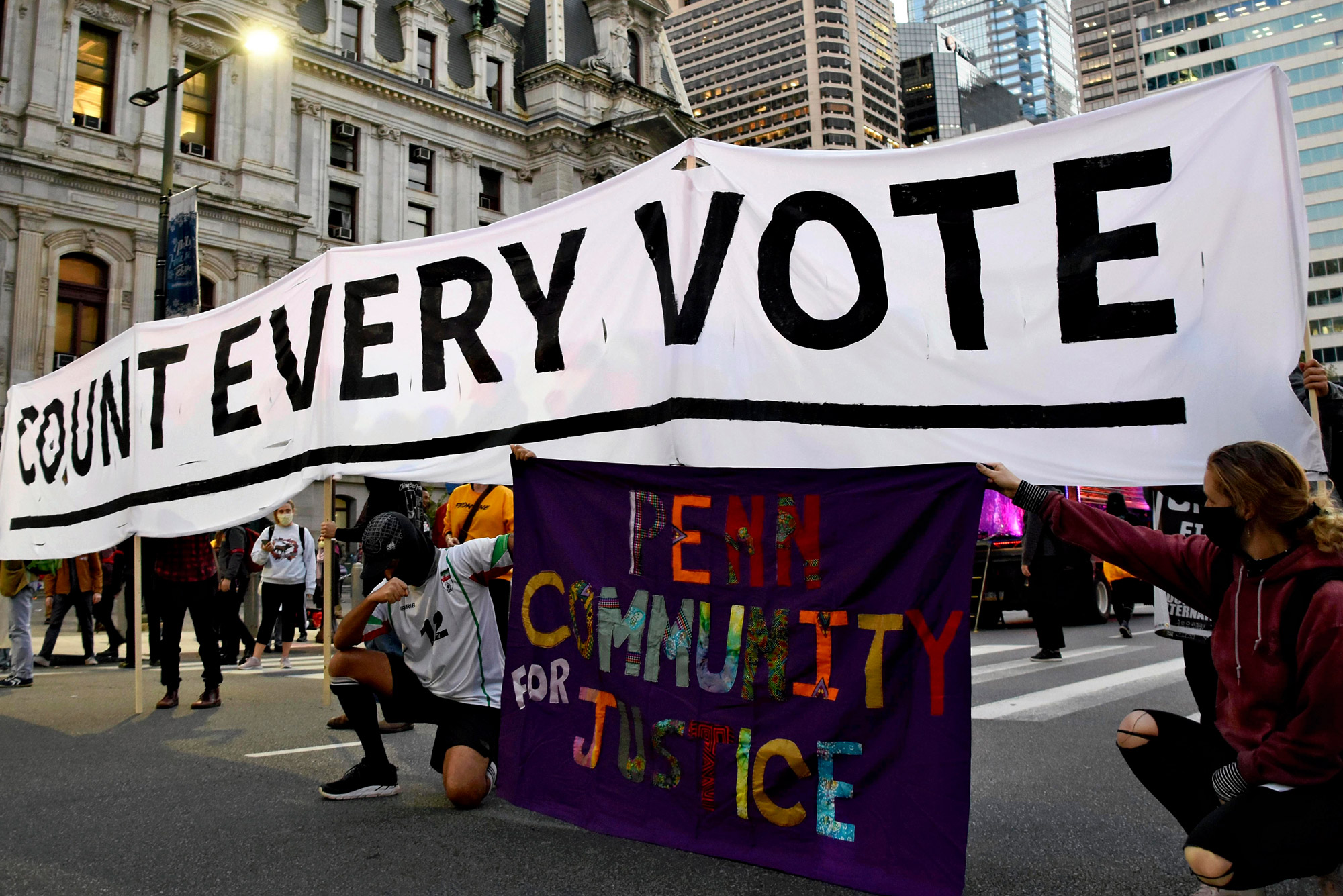 Protesters gathered in Pennsylvania Thursday to demand the counting of every vote as President Trump turned to the courts to win reelection. Photo by the Yomiuri Shimbun via AP Images

Two BU experts, one on constitutional law and one on American government, explain the Supreme Court’s possible intervention in ballot counting and any connection to Bush v. Gore

With President Trump threatening to ask the US Supreme Court to halt the counting of legally submitted votes from Tuesday’s election, will courts decide the next president as they did in 2000 with Bush v. Gore?

Before Tuesday, SCOTUS had already dabbed a toe into the election, in two decisions last month. The court allowed Pennsylvania, a battleground state, to count mail-in ballots that arrive within three days of Election Day, as long as they were postmarked on that day. But four justices hinted they’d be open to revisiting the case. The justices also rejected Democratic attempts in Wisconsin to have mail-in ballots counted after Election Day.

Trump’s court resort came on a chaotic day, after Joe Biden was declared the winner in another battleground state, Wisconsin. As of early Thursday, neither man had clinched victory, but the Associated Press put Biden just 6 Electoral College votes shy of the necessary 270 to be elected president. In Pennsylvania, state Republicans already have sued to prevent counties from letting voters correct missing signatures and other mistakes on mail-in ballots, which are likely to favor Democrat Joe Biden.

Also, the Trump campaign has sued to stop Michigan’s tallying until the state provides access to vote-counting sites.

The legal wrangling conjured memories of the 2000 election and Bush v. Gore, where the court halted a recount of Florida’s disputed votes, handing the presidency to George W. Bush.

BU Today asked Robert Tsai, who joins the School of Law in January as a professor of law, and Lauren Mattioli, College of Arts & Sciences assistant professor of political science, to assess the opening shots in this legal war. Tsai is an expert on constitutional law and law and government, and Mattioli on American government institutions and interbranch relationships.

With Robert Tsai and Lauren Mattioli

BU Today: Does Trump have the authority to seek a halt to the vote counting, and how could even the high court stop the counting of legally submitted ballots?

Tsai: The Trump administration is asking for permission to join the existing [Pennsylvania GOP] lawsuit. That’s the most likely vehicle to get any election issue in front of the Supreme Court. There were four justices who had shown some interest in the GOP position. Three were really interested in the theory that the Equal Protection Clause of the Constitution would be violated, that [Pennsylvania] might be changing the rules midstream by moving [counting of] those mail-in ballots a couple of days. In my view, that’s a pretty frightening thought. The question is, what would Amy Coney Barrett do?

The thing is not to be overly alarmed about it yet, because that lawsuit is about anything that comes in after Election Day. None of the votes being counted right now are affected by that lawsuit. As it stands in Pennsylvania, there are votes outstanding from the Philly area, expected to be heavily pro-Biden. He could wind up [winning the state].

Is there any precedent in Bush v. Gore that Trump could cite in an appeal to SCOTUS this time?

Tsai: It looks like there are at least three justices who might be willing to expand the logic of Bush v. Gore. There was that [non-precedent] language in Bush v. Gore, but most people were skeptical whether that could be true. It seems strange to say we have a legal principle that only works for one case ever. Someone did a count; Bush v. Gore has been cited hundreds of times. It’s not a case that’s been left there unused.

Mattioli: Bush v. Gore states that it can not be used as a precedent for future cases, so it strikes me as unwise to use it as the basis for a legal claim.

Did the high court’s decisions last month about various states’ counting procedures portend anything about how they might act vis-a-vis Trump’s threatened request?

Tsai: It might. There have been a slew of lawsuits by state GOPs. I tend to keep an eye on the arguments they’re making to see if anything resembles this one the Supreme Court showed interest in, in Pennsylvania. I’m not seeing a lot of that.

Mattioli: The recent Pennsylvania and Wisconsin cases remind us the Court determines the rules of the game, in part. But their rulings are not made because the president demands it. The Supreme Court is more tolerant of state courts’ interpreting their own election laws rather than federal courts. So, if a case comes via state court, I predict it will be more successful than one that originates in federal court.

Big picture: Do you think this election will be settled by the courts?

Tsai: There’s a lot to still play out, but the worst Armageddon scenario has been averted, that is to say, getting to a 269-269 tie [in the Electoral College]. If Biden hangs on to what is leaning his direction, he’s real close. Even if a federal judge interferes, it’s less likely to be decisive in the outcome.

Mattioli: I do not think this election will be settled by courts. There have been no legal challenges which credibly threaten to halt the ongoing counting of ballots. The counting of those ballots will, based on what we know about the outstanding vote, reveal a narrow but decisive Biden victory. I doubt that the Court will deign to consider a case where it will be forced to dirty its hands in the muck of the campaign without a strong chance that it will make the difference in the final outcome.

We can think about the Trump campaign’s challenges to the election outcome. Perhaps this challenge is a function of genuine concern. I don’t think it is genuine, because there hasn’t been evidence of widespread voter fraud; the Trump campaign has never expressed noninstrumental interest in election integrity before; and the voter suppression that has occurred has mostly impacted likely Democrat voters. Second possibility: President Trump knows he has lost and he is having a hard time confronting the truth. Third, and I think the most likely possibility, is that the legal challenges buy time. If the Trump campaign believes it can win in some of these holdout states—Arizona, Nevada, Georgia—and does, that will make Pennsylvania decisive. If Pennsylvania is decisive, it will be difficult for the Supreme Court to ignore a challenge based on Pennsylvania’s election administration. I think the legal challenges are meant to buy time.

There is 1 comment on Can President Trump Really Stop the Vote Counting?

Can President Trump Really Stop the Vote Counting?
1
share this