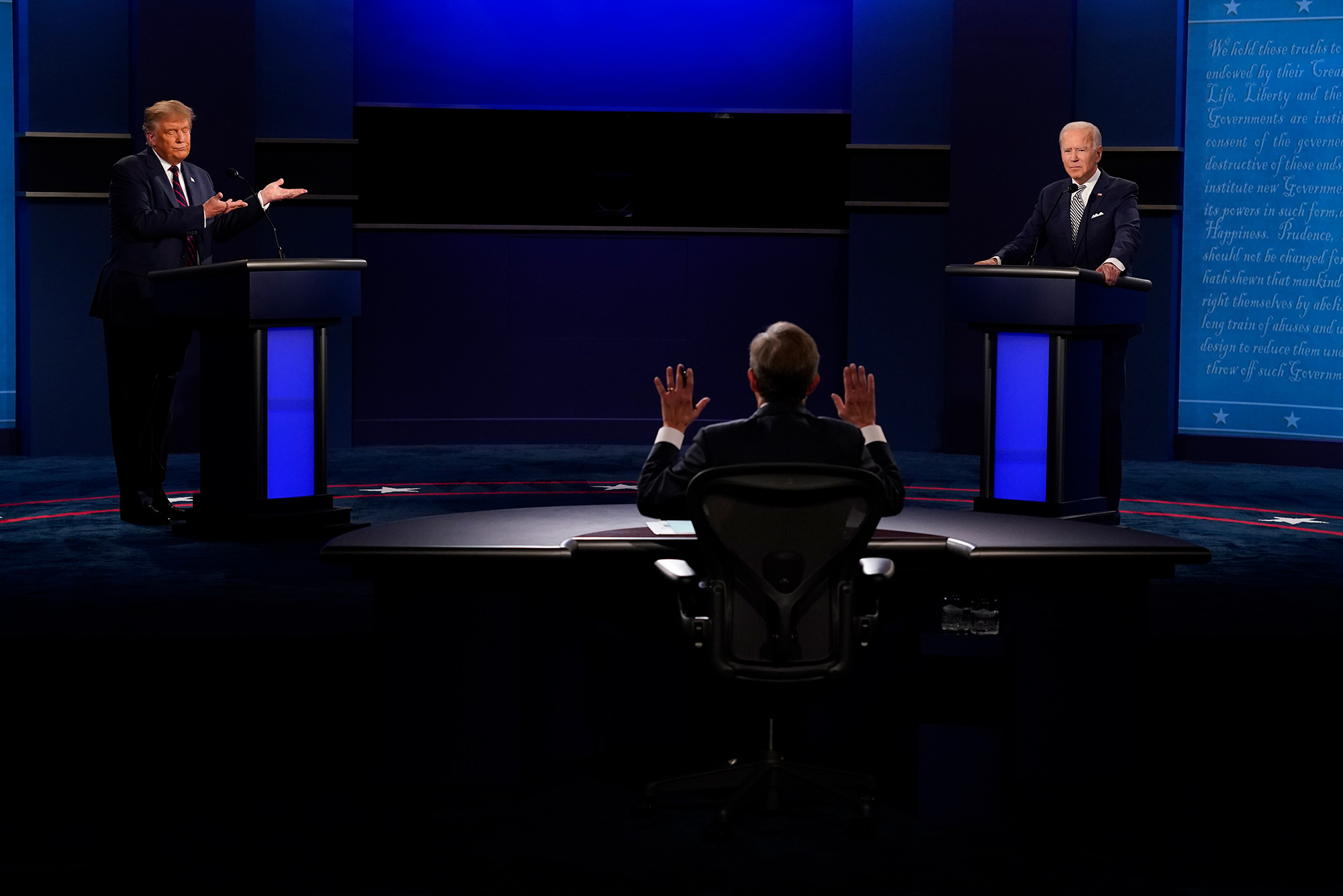 Insults and attacks fly. Biden: “Will you shut up, man.” Trump: “There’s nothing smart about you.”

It started out hot and just got hotter as the first presidential debate raged on Tuesday night. Over 90 minutes, President Trump boasted of fixing healthcare, creating prosperity, forceful leadership to combat COVID-19, and being the last hope of a country facing violent protests and un-American progressivism. Joe Biden pronounced Trump a race-baiting provocateur, interested in protecting his image rather than protecting Americans, unfit to address the nation’s racial and economic divide and a public health danger as the United States has passed 200,000 COVID-19 deaths, by far the worst of any nation in the world.

At multiple points both men showed their anger and frustration. Early in the evening, Biden told Trump, just “Shut up, man,” after being repeatedly cut off. And a few minutes later, Trump said, “There’s nothing smart about you.”

With the first debate between the president and former vice president now history—and two more on tap, October 15 and 22—who emerged stronger after Tuesday night’s event? We asked four BU experts to watch the debate and let us know their reaction: Sandro Galea, dean of the School of Public Health and Robert A. Knox Professor, an expert on social determinants of health; Jasmine Gonzales Rose, a School of Law professor, whose expertise includes racialized police violence; Lauren Mattioli, a College of Arts & Sciences assistant professor of political science, who specializes in government institutions and gender politics; and Thomas Whalen, a College of General Studies associate professor of social sciences, who researches US political and social history.

BU Today: What was your big takeaway from the debate?

Sandro Galea: Fundamentally, this election is going to come down to whether people have confidence that Vice President Biden can bring around a turnaround, in a time when the country feels beset with problems. The debate centered around President Trump’s defense of the past year primarily, but Vice President Biden struggled to articulate an alternative vision, in no small part because President Trump left very little space for conversation.

Jasmine Gonzales Rose: President Trump showed a woeful disregard for facts and informed decision-making, while Joe Biden showed respect for truth-seeking, evidence-based policymaking, and science. Joe Biden made it clear that if he were president, he would bring together diverse groups and experts—such as civil rights leaders and heads of law enforcement agencies—to develop policy solutions to police violence. My main takeaway was that Joe Biden is eager to engage in evidence-based, multidimensional discussions and policymaking, which are sorely needed today.

Lauren Mattioli: One concept I introduce the students in my Presidential Leadership class to is the idea of periodization—essentially, how should we think about the political past and contrast it with our political present? Is the world we live in like or unlike what has come before? It would be hard to watch tonight’s debate and think we are living the same era as 1960 (the year of the first televised presidential debate). Both candidates showed they are willing to forego even a nod to decorum.

Thomas Whalen:  The debate had all the appeal and sophistication of a WWF steel cage match, which is to say none at all. It was at times ponderous, crude, and exceedingly shallow. In fact, it was often unclear whether President Trump was debating his Democratic opponent or the moderator, Chris Wallace, who quickly lost control of the proceedings.

BU Today: Was there a gaffe or blunder that could cost one candidate or both candidates?

President Trump was bullying, hectoring, and rude. But at the same time, he so long ago reset the norms of acceptable behavior that one suspects his behavior did not strike any viewer as particularly unusual.

Gonzales Rose: When asked about white supremacists, President Trump seemed to implicitly concede that white supremacists are part of what he recognizes to be the legitimate political right. When asked to stop white supremacist violence, he called on the Proud Boys, a group recognized as a white-nationalist hate group by the Southern Poverty Law Center, to “stand back and stand by.” For the commander-in-chief to call on a group to “stand by” sounds like it is an acknowledgment that they are in his corner and could rightfully do his bidding. It is frightening that white nationalist vigilante groups are esteemed by President Trump.

Mattioli: None that will dominate the news cycle, I would guess. Trump’s major blunder was failing to condemn white supremacists yet again. Biden expressed support for, then distanced himself from, the Green New Deal. Neither will be particularly costly in terms of votes.

Whalen: The defining moment of the evening occurred when an exasperated Biden asked the president to “Shut up, man,” when Trump kept rudely interrupting him before he could get a sentence out. “You picked the wrong guy,” Biden said.

BU Today: Was there a highlight that one candidate will capitalize on?

Galea: Vice President Biden noted that one in 1,000 Black Americans have died of COVID and repeatedly mentioned that COVID is affecting the suburbs, suggesting that the Democrats will continue using the pandemic and the president’s handling of it as a key motivator for voters in the coming month.

Gonzales Rose: Former Vice President Biden acknowledged the truth of American history: that we have never accomplished racial equality and that we should seek, in this current moment, greater racial equity and uphold the Constitution.

On the converse, President Trump ignored the questions about the racial treatment of people of color and instead focused on law enforcement support when being asked about race issues in America. The only problem Mr. Trump identified as “racist” was racial sensitivity trainings that he called “racist,” “insane,” and “radical.” He seemed particularly bent on prohibiting such trainings in schools. Former Vice President Biden made it clear that these types of trainings were about learning to communicate in a more respectful way and to help build self-esteem in young people. In this time of increased racial tensions, respect and cross-cultural communication are more important than ever.

President Trump seemed more set on personal attacks than addressing the pressing issues facing the United States. In a powerful moment, Joe Biden made his priorities clear: “It’s not about my family or [Mr. Trump’s family], it’s about your family,” he said as he looked into the camera. More than anything, the presidency should be about all the people in the United States.

Mattioli: Biden’s most effective moments were when he addressed voters directly. He faced the camera and spoke clearly to the viewer rather than President Trump or Chris Wallace. By making voters feel a personal obligation to vote, and to believe that their vote matters, Biden can counteract fear and alienation with optimism and efficacy. Trump does not have much to highlight from his own performance, so his campaign will have to magnify Biden’s errors in the coming days.

Whalen: Only time will tell on that score.

The next debate will be held on Wednesday, October 7, between vice presidential candidates Mike Pence, the Republican incumbent, and Senator Kamala Harris (D-Calif), the Democratic nominee, and will be televised from 9 to 10:30 pm by the major networks, as will the following two presidential debates, scheduled for October 15 and October 22.

There are 8 comments on Debating an Extraordinary First Debate: BU Experts on the Performances of Trump, Biden

Debating an Extraordinary First Debate: BU Experts on the Performances of Trump, Biden
8
share this