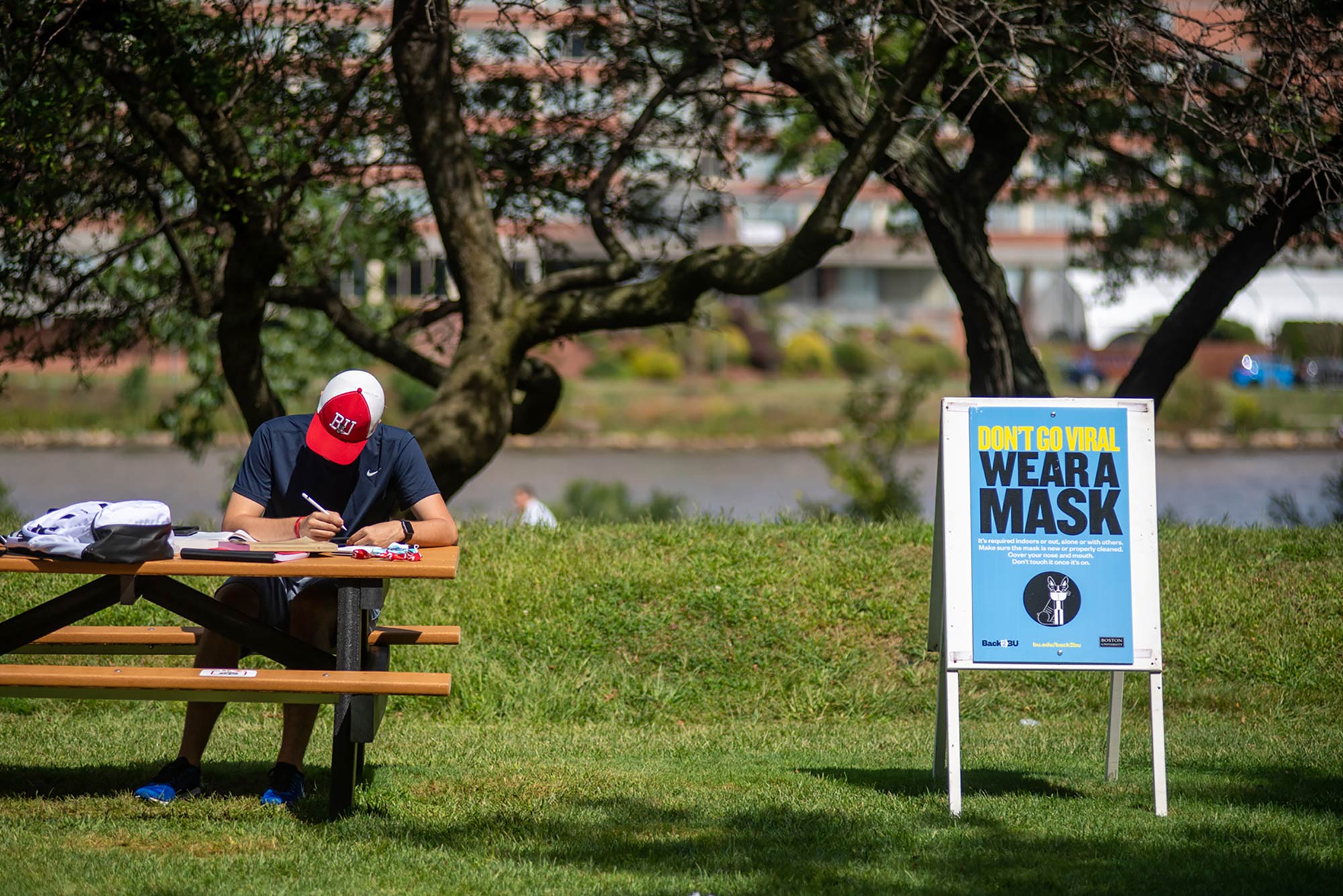 Back2BU: Photo Essay Captures a Move-in Like No Other and the Start of an Unforgettable School Year

It was a Move-In unlike any in Boston University’s history. For starters, the 2020 return to campus was spread out over two and half weeks, rather than the normal one to ensure adequate physical distancing during the COVID-19 pandemic. Then there were the scenes no one could have imagined a year ago: mask-clad students and faculty, libraries, classrooms, and dining halls with new traffic and seating patterns, even members of the BU Band performing with some instruments outfitted with shields to prevent droplet spread.

In this photo essay, we catch a glimpse of how radically campus life has changed since last March, when the COVID-19 pandemic catapulted the University to remote teaching and learning. Now, as residential life resumes, these images record the ways, big and small, life has changed on campus.

Kathleen Kumar (CAS’21) returning to StuVi I on August 24. Photo by Jackie Ricciardi

Move-in on West Campus on August 28, one of this year’s busiest days. Photo by Cydney Scott

Since only one person could help students move into their dorms this year, Claudia Ibarra soaks up some sun while her husband and their son, Eric Ibarra (CAS’24), schlep Eric’s belongings into The Towers August 26. Photo by Cydney Scott

Roommates Jennie Young (CAS’24) (left) and Charlotte Bausha (CAS’24) hustle to get Young’s things into their Sleeper Hall room before the rain hits on August 27, under the eye of a stern, but unmasked, Rhett. Photo by Cydney Scott

Getting a leg up? Sumner Jones (Questrom’23) in Mugar Memorial Library on September 1, the day before classes began. The library has had numerous changes to accommodate students during the pandemic, among them closed stacks, touchless pickup, and socially distanced seating and plexiglass barriers. Photo by Cydney Scott

All classrooms have been outfitted with signs to ensure proper social distancing this fall. Photo by Cydney Scott

A College of Arts & Sciences classroom on the first day of classes, September 2. Photo by Jackie Ricciardi

Students showing their attestation emails confirming they are symptom-free at the start of the Human Physiology class taught by Elizabeth Co, a Sargent College clinical assistant professor, in Morse Auditorium on September 2, the first day of classes. Stickers were placed on seats throughout the auditorium to maintain necessary social distancing. Photo by Cydney Scott

Sargent’s Elizabeth Co, a face shield over her mask so she could move safely among her students in Morse Auditorium, began her first class by talking about how COVID has touched her life and expressing confidence in the University’s protocols. “I do think there are few safer places to be,” she said. “I ask that we all stay safe as a community.” Photo by Cydney Scott

Fueling up for the first day of classes: Ethan Strauther (ENG’22) at breakfast at Marciano Commons on September 2. Tables are set up for one diner to ensure adequate social distance. Photo by Jackie Ricciardi

Back2BU: Photo Essay Captures a Move-in Like No Other and the Start of an Unforgettable School Year

There are 7 comments on Back2BU: Photo Essay Captures a Move-in Like No Other and the Start of an Unforgettable School Year

Back2BU: Photo Essay Captures a Move-in Like No Other and the Start of an Unforgettable School Year
7
share this