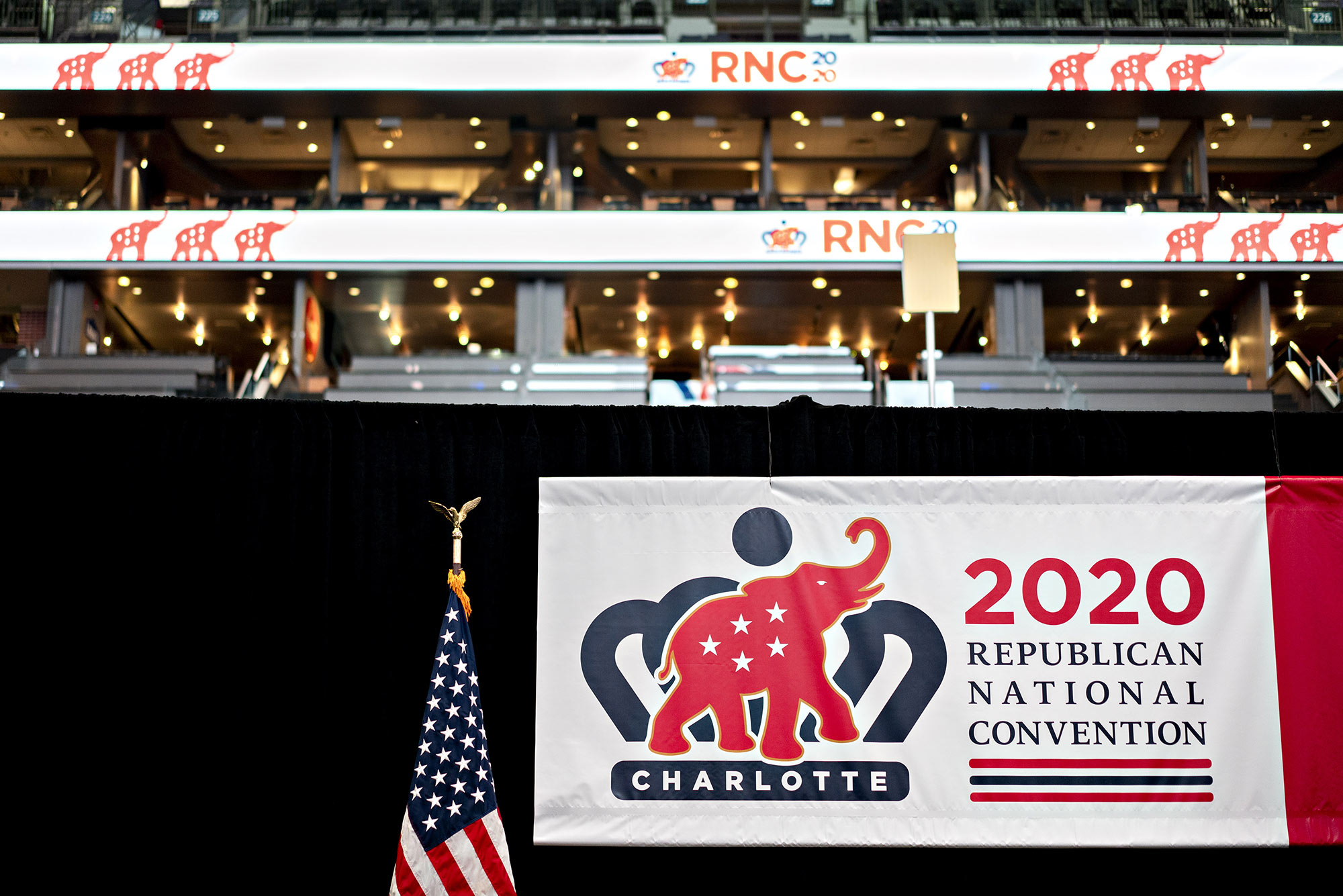 Only a fraction of delegates are attending the Republican convention in person, with COVID-19 keeping most from the Spectrum Center in Charlotte, N.C. Photo by Andrew Harrer/Bloomberg via Getty Images

As GOP Convention Kicks Off, BU Experts Weigh In on What Trump Needs to Say and Do

Now it’s the GOP’s turn. A week after the Democratic Party nominated Joe Biden and Kamala Harris, the Republican National Convention opens today, and while it will replicate the Democrats’ largely virtual affair, 336 delegates of the 2,550 total will gather in Charlotte, N.C., from August 24 to 27 to conduct formal business, including participating in today’s renomination of President Trump. He’ll accept the party’s nod in a speech Thursday night from the White House, despite critics who say it’s illegal to use federal property for a campaign event.

After this panel of BU faculty experts weighed in on the Democratic gathering last week, we’ve reached back out to them to do the same on the GOP’s.

BU Today: What must Trump say in his acceptance speech to advance his candidacy?

Paula Austin, College of Arts & Sciences assistant professor of history and of African American studies: This, of course, depends on who we are assuming his audience to be. For folks who have supported the president thus far, he will merely have to be himself to advance his candidacy, which I think is probably the expectation. It is still unclear whether the Republican Party is concerned about folks who may have left the party or are wavering in their support because of some of the current administration’s actions. I would assume, though, that there is some concern for this, and that there will be an attempt to manage some of the president’s rhetoric—and maybe even tone?

Lauren Mattioli, CAS assistant professor of political science: Trump has to get his base excited to turn out to vote. He should take this time to reinvigorate his supporters and to encourage disenchanted 2016 voters to come back into the fold.

Maxwell Palmer, CAS assistant professor of political science: President Trump has struggled to articulate a clear agenda and rationale for his reelection. To advance his candidacy, he needs to provide an affirmative vision for why he should be reelected and what Americans can expect from a second term. In particular, he needs to speak to voters who supported him in 2016, but are now leaning towards voting for Joe Biden.

Research suggests Trump’s base is racist. As the country debates systemic racism, do you think he or other speakers will address that national examination of conscience? What should they say?

Austin: Again, I think this is very audience-specific. And given who is on the list of speakers thus far, there will likely be some reflection on President Trump’s and the Republican Party’s actions (through the Senate) as not based in racist ideologies or having racist outcomes. Based on what we have seen thus far, there will likely be more references to the need for law-and-order measures in response to community calls for systemic change.

Mattioli: It would be nearly impossible for a speaker at the RNC to acknowledge, denounce, and suggest major changes to systems of racial oppression without implicating the Trump administration’s policies and rhetoric. Anyone who did so would be going rogue—there might be long-term political advantages to that, but the short-term consequences would be devastating. I don’t think it will happen.

Palmer: President Trump and his supporters have not demonstrated any interest in speaking about systemic racism or promoting a national examination of racist histories and policies. Instead, he has opposed the protests following the death of George Floyd, opposed the removal of Confederate monuments, and taken other actions to support the status quo. The convention speakers are unlikely to focus on addressing racial injustice, but instead on opposing the Black Lives Matter movement and efforts to reduce police violence and systemic racism.

Bruce Schulman, CAS professor of history and William E. Huntington Professor of History: Let me respond to the first two questions with a question: which recent presidential candidate uttered the following during a campaign speech in Miami?

America has one national creed, but many accents. We’re now one of the largest Spanish-speaking nations in the world. We’re a major source of Latin music, journalism, and culture. Just go to Miami, or San Antonio, Los Angeles, Chicago, or West New York, New Jersey…and close your eyes and listen. You could just as easily be in Santo Domingo or Santiago or San Miguel de Allende. For years, our nation has debated this change—some have praised it and others have resented it. By nominating me, my party has made a choice to welcome the New America.

Did you guess Barack Obama? Bill Clinton? Jimmy Carter? The answer is George W. Bush, and he delivered those words in Spanish! I quote those words because not too long ago, leading Republicans like Bush and his political guru, Karl Rove, recognized the nation’s changing demographics. They concluded that the success, even the political survival, of the Republican Party required finding support among nonwhite voters. It worked. In 2004, Bush won 44 percent of the Latinx vote en route to victory, becoming the only Republican candidate in the 21st century to win a majority of the popular vote.

Since 2004, however, the Republican Party has moved in a very different direction. It has embraced its minority status, become an almost entirely white party, and has (at least in national elections) hitched its fortunes to the bizarre, antidemocratic elements of the US political system (the Electoral College, the Senate, gerrymandering) as well as efforts to shrink the electorate.

Putting aside the question about what he should say, it seems likely that President Trump will not address that national examination of conscience, but will continue to sound the same themes he has emphasized over the past few months—“law and order,” “defending” the suburbs, “let Democrat cities rot”—that undermine efforts to promote racial justice.

Will the fact that some GOP delegates will gather in person in Charlotte, while Democrats stayed away from their convention city, have any effect on voters’ impressions of the two parties, and what might those effects be?

Austin: While it’s difficult to predict “impressions,” the president thus far has invested some energy in doubling down on not really taking pandemic protocols seriously—often calling out others who do. Still, he will not be showing up in person for the convention when some delegates will. Many of his supporters do not seem at all fazed by inconsistencies.

Mattioli: I doubt the people who would pay attention to the level of in-person attendance at the conventions do not already have well-formed political preferences, so to the extent it may influence voters’ impressions, it will not be decisive.

Palmer: The presence of some GOP delegates in Charlotte is unlikely to have any effect on voters. The main focus on the convention will be on the speeches, which will mostly be remote, including President Trump’s acceptance speech from the White House. If President Trump had followed his original plan to appear at the convention despite the pandemic, that potentially would have offered a stronger contrast for voters.

Schulman: As a US political historian and longtime convention buff, I long for those unscripted, unexpected moments that can happen—albeit rarely—when an enthusiastic, unruly crowd gathers in a confined space: 1896, when the silver-tongued 36-year-old William Jennings Bryan electrified the audience and captured the Democratic presidential nomination; 1940, when the “voice from the sewers” erased any doubts about FDR’s willingness to break the two-term tradition; even 2004, when the balloons got stuck in the rafters of the Boston Garden and CNN viewers heard the obscenity-filled screams of a convention operative. Sure, a Zoom convention will likely produce technology failures (but we are used to those). So even though the chances for surprise remain very slim, maybe something strange will happen in Charlotte.

New York Times op-ed columnist David Brooks argues that Trumpism will outlive Trump. Whether he wins or loses this fall, do you think this convention will be Trumpism’s last hurrah or will Republicans be grasping at his mantle at the 2024 convention?

Austin: What we’ve come to call “Trumpism” indeed existed before Donald Trump became president, so it is likely that these ideas, policies, and practices will continue beyond his presidency, if he does not win the election. President Trump and his administration have merely amplified (some very foundational) concepts we have had with us for a long time, and maybe made them visible in policy and practice in a way we had not seen for a while. This means, though, that these ideologies are available and that they continue to be appealing to, and garner support from, some portion of the United States (and so many of them have existed in policy and practice in some small and large measures across the country already). Still, if we can look at the role of the Electoral College in the 2016 election (and other presidential elections), we can see that without this relic, elections might be more democratized in the future.

Mattioli: How one defines “Trumpism” will make it easy to wriggle out of any prediction regarding its lasting power. If it is, as Brooks defines it, a long-existing sect of conservatism defined by “class-based ethnic nationalism,” then Trumpism predates Trump and will persist so long as class, ethnicities, and nations do.

Schulman: Obviously, the result of this November’s election will say a lot about the future of “Trumpism”; the outcome will also help define how aspiring Republican politicians will address it (and how future historians understand it). That said, the enduring legacy of Trumpism also depends on the meaning of the term. Does “Trumpism” signal a set of policy preferences—hostility to immigration, free trade, international cooperation, and environmental protection? Personal loyalty to President Trump? White ethnic nationalism? A clear defeat for Trump in November will likely erode his personal standing among Republicans and invite many Republicans to distance themselves from him (if not repudiate Trump outright). But Trumpism as a strain within Republican politics predated Trump and will likely outlast him.

The Republican National Convention will be broadcast each of the four nights from 10 to 11 pm ET on the major broadcast networks. Portions will be streamed live on the convention website. Coverage on the PBS NewsHour begins at 8 pm, with most cable outlets beginning coverage at either 8 or 9 pm. Among the speakers are First Lady Melania Trump and several of the president’s adult children, Tuesday; Vice President Mike Pence accepting renomination, Wednesday; and President Trump accepting renomination, Thursday. Other speakers include former United Nations ambassador Nikki Haley and Senator Tim Scott of South Carolina, Monday, and Senator Joni Ernst of Iowa, Wednesday.

As GOP Convention Kicks Off, BU Experts Weigh In on What Trump Needs to Say and Do

As GOP Convention Kicks Off, BU Experts Weigh In on What Trump Needs to Say and Do
0
share this