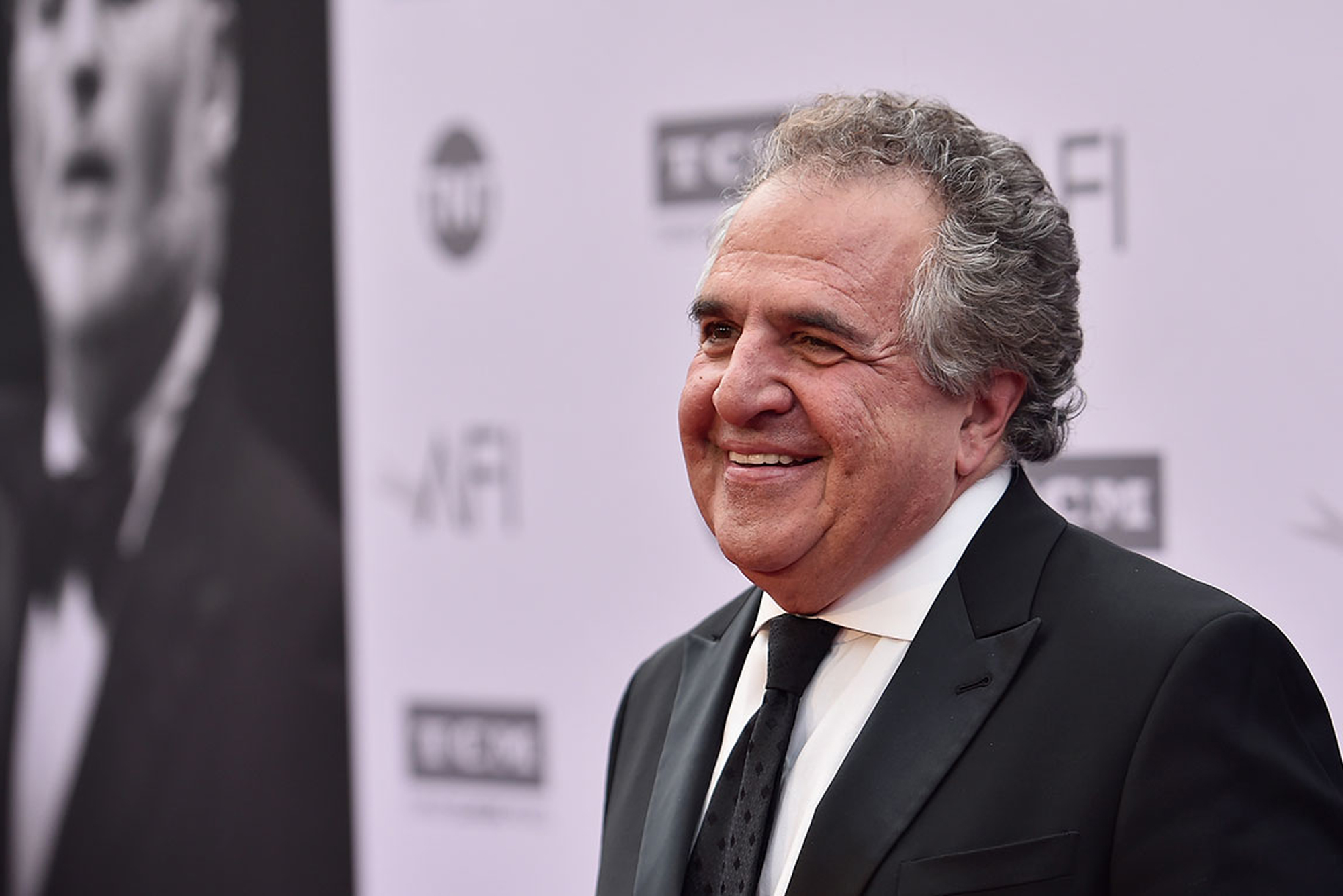 In 2017, Jim Gianopulos became head of a major film studio that had been turning out classics for decades—Sunset Boulevard and The Ten Commandments, Psycho and Saturday Night Fever, The Godfather trilogy and the Indiana Jones series, Titanic and Selma—but was now on the brink of collapse. Paramount Pictures, after producing a number of box office flops, including Zoolander 2 and a Ben-Hur remake, had hemorrhaged $450 million in just one year. It was up to Gianopulos (’73), the new chair and CEO, to lead the company back to its former glory. He did it in under three years, steering Paramount to profitability with hits like Mission: Impossible – Fallout and the postapocalyptic thriller A Quiet Place.

Now, he’s facing another career-defining moment: keeping Paramount above water amid pandemic-enforced shutdowns on movie lots and in theaters. At a time when people are watching more content at home than ever before, he hopes to do it by leveraging the studio’s television division and its relationship with streaming platforms. And although we’ve gotten used to watching new movies from the comfort of our couches, Gianopulos is confident cinemas will bounce back.

“There is this pent-up desire to return to normalcy, including moviegoing,” he says. “Being stuck at home for months, I think we’re developing a sense of yearning that people will respond to.”

Before Gianopulos joined Paramount, he was at Fox Filmed Entertainment for 25 years. For the last 16 of those years, he was Fox’s studio head, overseeing hits like Avatar, Deadpool, and Life of Pi. When he accepted the job at Paramount at age 65, the Hollywood Reporter asked him, “Why not just retire?”

“I felt that there was another chapter,” Gianopulos told the magazine. “Plus, my wife would probably kill me for being around the house all the time.”

Gianopulos also believed there was a new chapter in store for Paramount, the longest-operating studio in Hollywood.

“The studio is more than 100 years old and has had amazing successes over the years,” says Gianopulos. “It certainly deserved to be in much better shape than it was.”

When determining what movies to green-light, Gianopulos follows one simple guiding principle: “Make it for someone or make it for everyone.” Some films have a defined and targeted audience, and the size and demographics of that audience inform the budget and marketing. “In terms of making it ‘for someone,’ I think there is also an opportunity there to make films that have commercial potential, but are specialized in their appeal—films that are artistically bold and that aspire to a higher level of expression.” Films he’s green-lit in the past that achieve this, he says, include Slumdog Millionaire, 12 Years A Slave, and Birdman—all of which won Best Picture Oscars. “I’m proud of taking chances on films like these over the years,” says Gianopulos, who adds that they might not look like obvious successes in advance, but are transformed “in the hands of masterful talent that can bring them to life in extraordinary ways.”

Other films he’s overseen, like those in Paramount’s Mission: Impossible franchise, hold a broader appeal and are then marketed to targeted groups within the wide audience. For Mission: Impossible – Fallout, his team created an ad that aired exclusively on ESPN and featured NBA player James Harden. They also produced a special teaser for IMAX theaters to show those moviegoers how the bigger screen would enhance the experience.

“Both of those types of movies are viable,” he says of his someone and everyone rule. “But if you don’t know what audience you’re making it for, you’re going to get into trouble.”

He also considers how emerging technologies can amplify the way stories are told on the screen. Perhaps the best example of this in his career, he says, is Avatar, which he worked on at Fox.

Avatar writer/director James Cameron had given Gianopulos the treatment for the film about a decade before it got made in 2009. “We had to wait until the technology had caught up to the point where you could make the film,” he says. The movie combined live action shots with CGI characters and environments and used new motion capture animation technologies, as well as an improved 3D camera.

“People don’t realize there wasn’t a single blade of grass in that film that was real. The environment was from the imagination of Jim Cameron that he then realized through technology that he basically invented,” says Gianopulos. At $237 million, Avatar is one of the most expensive films ever made. At one point, as they discussed green-lighting it, Gianopulos said to Cameron, “Do they have to have tails?” referring to the blue alien creatures in the film. It’s something that Cameron teases him about to this day. “That film was one of those leaps of faith that you make, based on the quality of the filmmaker and his talent and prior success,” he says. “And it paid off.” Avatar earned $2.78 billion at the global box office and remains one of the highest-grossing films of all time.

Gianopulos grew up in Brooklyn, N.Y., the son of Greek immigrants. When he was eight years old, he started going to the movies with his grandfather. “We went a lot. He wasn’t very particular about what movies we saw. He loved to go to learn English. I’d have to translate for him during the movie sometimes, which would annoy other people in the theater.”

At BU, Gianopulos majored in political science and studied under the late Howard Zinn, a professor emeritus of political science. “He was an extraordinary teacher. I feel lucky to have met him.” Still, he says, when he discovered there were classes where you could discuss movies, he enrolled in as many as he could. An avid guitarist, he played in Boston’s music scene and dreamed of turning professional but didn’t think his talent would take him that far. Instead, he focused on breaking into the entertainment business by way of law school. “I had this thought that maybe I could be the lawyer for the Rolling Stones if I studied hard enough.”

I had this thought that maybe I could be the lawyer for the Rolling Stones if I studied hard enough.

Following law school and a master’s program for entertainment law, he got a job negotiating music rights deals for musicians and songwriters as the director of business affairs for the American Society of Composers, Authors and Publishers. He then became the senior vice president of business affairs and acquisitions at RCA/Columbia Pictures International Video. Home video was just starting to take off, and he negotiated the acquisition and production agreements for films on video.

From there, Hollywood’s doors opened.

He headed to California for a role at Paramount’s home video and pay television division before taking a senior vice president position at the now-defunct independent film company Carolco Pictures, where he handled the international distribution of films like Basic Instinct and Terminator 2. That led him to Fox, then back to Paramount.

The Future of Film

When Gianopulos arrived at Paramount in 2017, he knew that if he wanted to turn things around, he would need to think outside the box office. “In some ways, I joined Paramount at the best and worst of times,” he says. He was well aware of the deep financial losses, but he saw opportunities, in areas like television, that weren’t being leveraged to their fullest. Since Gianopulos came into the picture, Paramount Television Studios has quadrupled its small-screen output, producing hit shows that include Netflix’s 13 Reasons Why, Amazon’s Jack Ryan, and Apple TV+’s Defending Jacob. Many more shows are in various stages of development.

Both moves have paid off during the COVID-19 pandemic. In April 2020, Paramount moved its romantic comedy The Lovebirds, originally scheduled for theaters, to Netflix. At-home viewership of its content through streaming and video on demand—which Gianopulos says has grown exponentially since people began staying home—has been the only way to recoup costs this summer.

Streaming might be changing the film industry, but Gianopulos doesn’t see it as a detriment to the future of studios. Rather, it has afforded a host of opportunities as it’s evolved.

“The first stage was basically when we, as studios, were able to open our vaults to a streaming platform like Netflix, and provide them shows that had been on the air previously, but that still had appeal,” he says. “Then when others, like Hulu and Amazon, came on to the market, these platforms sought to differentiate themselves by having exclusive content. In some respects, that was another opportunity for us as studios, because when they wanted content exclusively, they were effectively buying out the market.” The bigger the market became, the higher the price of that exclusivity.

The demise of theaters has been foretold since the advent of television—every time new technology becomes available, the end of the theatrical experience is predicted. And each time, the opposite happened.

The next stage, as even more streaming platforms have come into play, has been the desire for original content.

“Many have sought us as content creators with access to talent, storytellers, ideas, and intellectual property to make original programming for them,” Gianopulos says. That access has only grown since Paramount’s parent company, Viacom, merged with CBS in late 2019 to form ViacomCBS, whose chair is Shari Redstone (LAW’78,’81).

“We are a film company and a television production company,” says Gianopulos, “but in the end, we are content creators.”

Those streaming initiatives helped the bottom line, but there’s no doubt Hollywood has been hit hard by the pandemic. “I don’t want to diminish the impact on the rest of the world, but from the perspective of the film and television industry, everything shut down virtually overnight.” Theaters closed. Productions halted. Plans to shoot an action sequence for the next Mission: Impossible film in Italy during the Venice Carnival were scrapped. A Quiet Place Part II was set to premiere in theaters in March 2020, but was pushed to April 2021.

One long-term effort that has not been affected by COVID-19, according to Gianopulos, is increasing diversity in the movie business. He says Paramount is constantly reevaluating its diversity and inclusion initiatives. Every production team has to outline its plans for diversity in a film, from the story to the people in front of and behind the camera. The company has created internships, mentorships, and outreach for women and people of color. “It’s long overdue and we still have a long way to go,” says Gianopulos. “But it’s something we are very focused on.”

Gianopulos is now setting his own course for Paramount during the pandemic. This March, Universal Pictures shook up the industry when it announced movie releases would be available for streaming at the same time as theatrical premieres, starting with Trolls World Tour on April 10. Movie theater company AMC retaliated, saying it would not show Universal’s films.

“The demise of theaters has been foretold since the advent of television—every time new technology becomes available, the end of the theatrical experience is predicted. And each time, the opposite happened; the penchant for movies has expanded,” he says. “So many films today are so extraordinary in their scope and experience that seeing them in theaters is different from anything that we can get at home. We will get back to that collective, communal experience.”