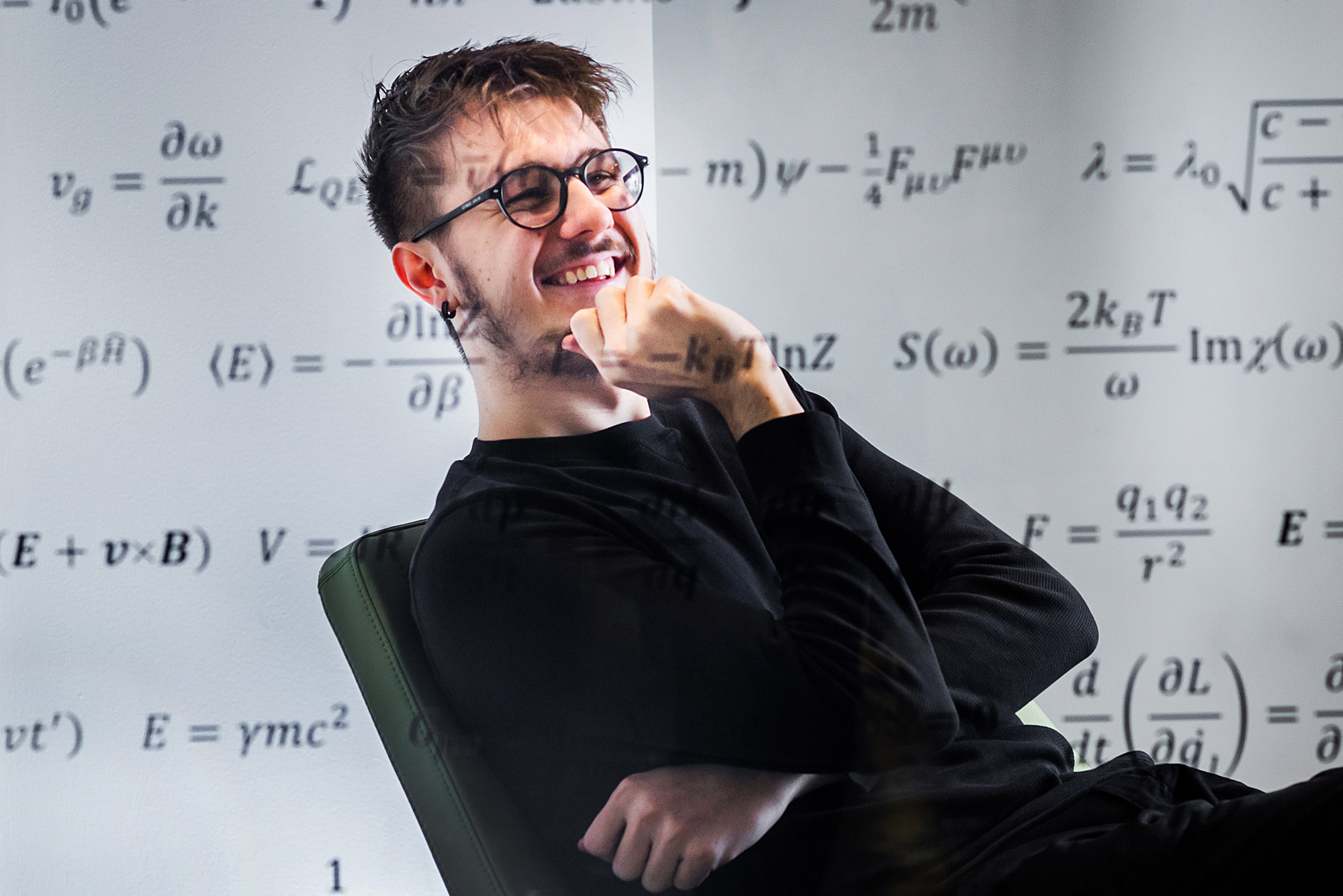 His professors say Salvatore Pace (CAS’20, GRS’20)  has a bright career ahead of him as a theoretical physicist. Photo by Jackie Ricciardi

Salvatore Pace, whose love of science might be matched only by his passion for punk music, is the first BU student to receive a Churchill Scholarship, an honor comparable to a Rhodes or a Mitchell scholarship.

And that thrills David Campbell, a College of Arts & Sciences professor of physics, department associate chair, and director of graduate studies, who says Pace (CAS’20, GRS’20) is one of the best physics students BU has had in years. The Winston Churchill Foundation received 127 nominations this year, the most in the competition’s history, making Pace’s achievement even more impressive.

“When we get someone at Sal’s level, the sky is the limit,” Campbell says. “He’s very diligent, thorough, and hard-working. And he’s just plain smart.”

He’s also not ordinary. Obsessed with theoretical physics—a realm that uses the language of mathematics to explain and predict natural phenomena like electricity or light—Pace has a 4.0 grade point average, is the lead author on two research papers, and has been enrolled in graduate level physics courses since junior year. He is also a vegan and a fan of fiercely political music that rails against corporate and police abuses who listens to punk and hardcore music while studying or solving problems.

That’s an ideal fit for the Churchill Foundation, which selects students for its scholarship based on how committed they are to science research and academic scholarship, not because of how well-rounded they are. And even a stellar academic track record or proven talent in research does not guarantee nominees a spot—the foundation also looks for candidates with “interesting jagged edges.”

The 16 undergraduates chosen by the foundation this year will participate in a yearlong science, math, and engineering fellowship at the University of Cambridge, at no cost. (Among its graduate fellows are nine Nobel laureates, three of them in physics.)

Pace, dressed in black, with hoop earrings in both ears, says he’s honored by the award, jagged edges and all. “I’m just some kid who likes punk rock and gets super-excited about theoretical physics,” he says. “I’m having a fun time just being me.”

Punk has helped me, and still does, develop the confidence to pursue physics as a career.

He uncovered his deep passion for physics at BU, but developed a love for astronomy in middle school. The son of a landscape company owner, he grew up outside Buffalo, N.Y., and watched the Science Channel with fascination. He got hooked on documentaries about how space works, recalling how he received a telescope as a gift. It led to one of his earliest discoveries: he didn’t like being outside at night in the freezing cold .

During his junior year at Hamburg High School, a teacher asked him to be part of a team competing against other high schools nationally in the Moody’s Mega Math Challenge for a $20,000 prize. Teams get 14 hours to solve a problem, and their answers are judged by a panel of PhDs. His team didn’t win, he says, but he liked working both independently and as part of a team.

“I didn’t know it at the time, but that was kind of a taste of how research is done,” Pace says. “There’s these very frustrating moments—three of the four of us would want to quit—and one person would grab us all back, and then we’re like, OK, let’s keep on going.”

Studying “physical systems in a quantitative way” increasingly fascinated him, he says, and he decided he would pursue it in college to “see where it takes me.”

At BU, Pace submerged himself in the subject. Sophomore year, he chose to overload his schedule with five physics classes, noting in his personal essay to the Churchill Foundation that the “academic risks paid off as I developed a keen interest in theoretical condensed matter physics.”

By the end of junior year, he was the lead author on two papers cowritten with Campbell that were published in the journal Chaos. He’s working this year with his senior thesis advisor, Christopher Laumann, a CAS assistant physics professor, researching quantum spin ice and a theory about how electrons interact with light for his senior thesis.

Pace will graduate this spring with both a bachelor’s, with honors, and a master’s in physics. He is also a participant in four faculty-supervised research projects, works as an undergraduate teaching assistant in advanced level courses like Quantum Physics II and Electromagnetic Fields and Waves II. His extracurriculars? For fun he mentors freshmen physics students through the PRISM program (PeeRs for Incoming Student Mentorship) and works on course manuals.

BU had not nominated a student for the Churchill Scholarship until last year, according to Jeff Berg, BU’s director of national and international scholarships. (Colleges and universities must undergo a qualification process to nominate a student; 82 colleges have qualified, among them Harvard, MIT, and Yale.)

Berg says that Pace was the perfect candidate, because he is known as a generous mentor and research colleague. In his work interviewing students to match them with scholarship and grant opportunities, Berg says, on more than one occasion he’s heard students refer to “my mentor, Sal” or say, “I’ve been working with Sal.”

“That’s really a special kind of campus presence for an undergraduate,” Berg says.

Pace says he’s driven by a deep passion for physics, but he’s also grateful to his family, who have no background in science, for supporting his goals. After the scholarship, he plans to pursue a PhD, follow his research interests into academia, and teach.

“I want to understand how the world works,” he says. “It’s almost like you’re putting a puzzle together—a very complicated one—and you may only contribute two or three pieces of the puzzle in your life. And with all these other people working on this puzzle, you’re putting together how the universe works. I think that’s amazing.”

How does punk music fit into the picture? Pace says he listens to bands like Knocked Loose and Sharptooth and goes to live shows to burn off energy. The punk ethos of individuality also resonates, he says.

“It helps people develop the courage to become a unique individual who feels comfortable—possibly even good—if they don’t fit in with the norm,” he says. “Punk has helped me, and still does, develop the confidence to pursue physics as a career.”

Laumann says whatever Pace is doing, it’s working for him. He is persistent, motivated, and undeterred by difficult challenges, says his thesis advisor, and he’s on track to do exceptional work in the field of physics.

Pace “is one of the top potential theorists to come through BU physics in a long time.”

A Coveted Scholarship for a Physics Standout
5
share this