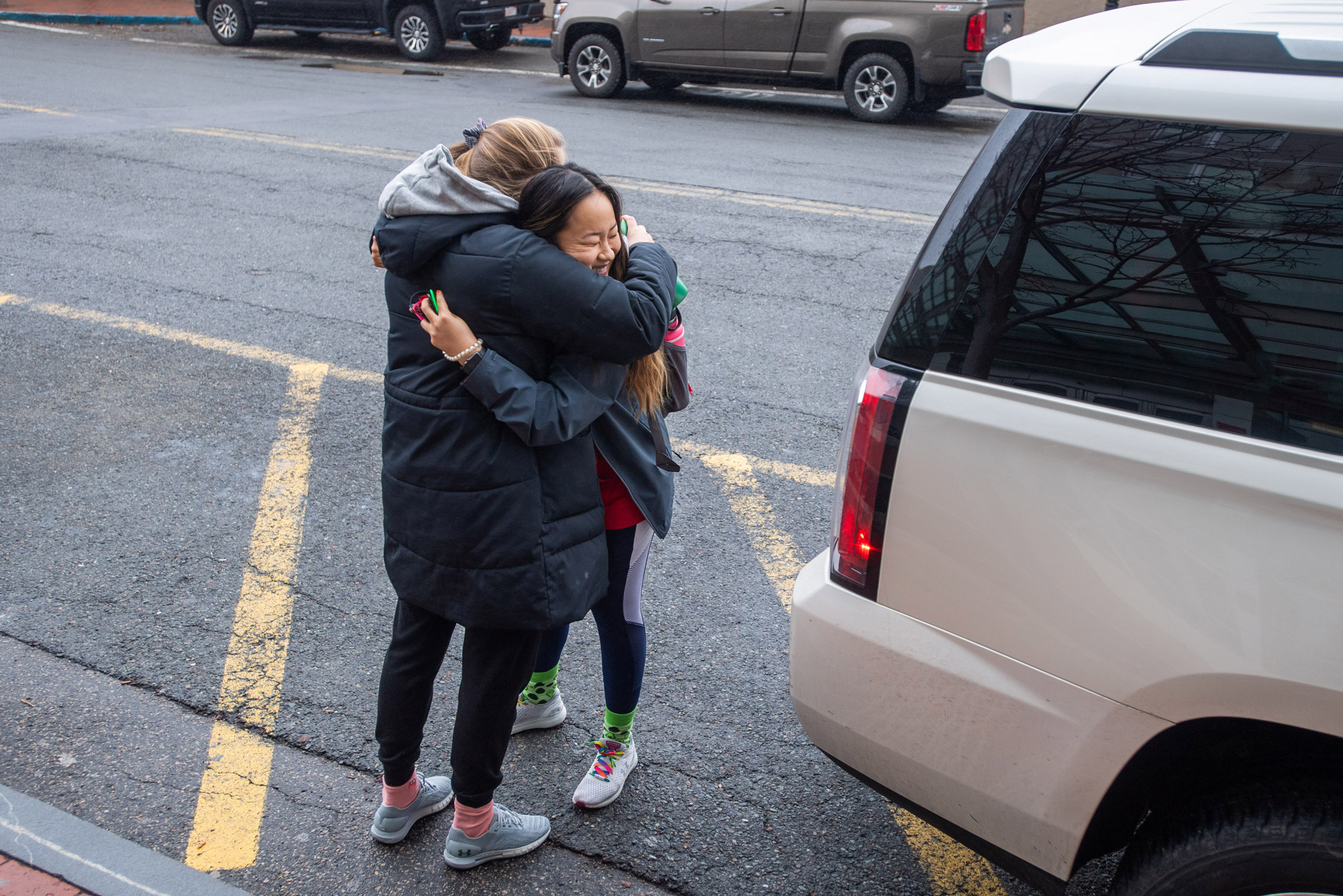 BU field hockey teammates Shannon Ma (Sargent’21) (right) and Rebecca Janes (ENG’22) hug goodbye in March as BU students left campus to begin remote study because of the pandemic. A BU social worker wants to know how the sudden wrenching apart of social groups, amid a backdrop of financial, career, and health worries, will impact the mental health of America’s future workforce. Photo by Cydney Scott

BU social work professor will probe how coronavirus hits the mental well-being of America’s future workforce, and what makes some people more resilient

We all know the novel coronavirus has done serious damage to Americans’ physical and economic well-being. But what will it do to their mental health—in particular for the workforce of the future, young people who find themselves suddenly evicted from college campuses, their work offices, and perhaps even out of their jobs entirely?

To find out, Hyeouk Chris Hahm, a Boston University School of Social Work associate professor and chair of social research, plans to survey 1,000 millennials and Generation Zers across the United States, ages 18 to 30, in the coming year (remotely, of course).

The goal is nothing less than measuring, in real time, how the “unprecedented experience” of COVID-19 plays out with the future American labor pool, says research collaborator Cindy Liu, a Harvard Medical School assistant professor of pediatrics and a Brigham and Women’s Hospital pediatrician and psychologist.

Social distancing is creating a sense of loneliness and of not being able to accomplish things.

“In the next 10 years, the majority of our workforce will be of these two generations,” says Liu. “The fact that they’re engaging in remote work very suddenly, engaged in remote study very suddenly—we need to know how that affects their health and the extent to which they’re able to adapt. How they fare right now sets the stage for how they’re going to fare and how they’re going to contribute to society.”

Hahm says the duo will conduct online surveys with young adults who are living or being educated in the United States. Subjects, who can apply for the survey here, will be contacted at one of three points in April or May, July or August, and October or November, with questions from their sleep quality to their physical and psychological states. At each point, the researchers will select 20 interviewees for follow-up, in-depth interviews over Zoom.

To fund their project, named CARES (COVID-19 Adult Resilience Experiences Study), Hahm and Liu are seeking support from government and private sources, and they may tap some research grants funding Liu’s lab as well. Meanwhile, Hahm says, BU has provided “the infrastructure that has allowed us to rapidly scale this survey to 1,000 participants.”

The following are five effects of the pandemic on mental health the duo hypothesize might be revealed, including one potentially positive outcome.

Generation Z is more racially diverse than its elders, Hahm says, and its members were facing a backlash in the Trump era even before COVID-19. Now, the pounding that poor Americans of color are disproportionately taking from the disease shows how the pandemic is “going to make unequal people even more unequal,” she says.

On the other hand, Liu says, underserved people from tightly knit neighborhoods who have strong social networks and friendships might be able to weather the emotional storm ahead.

2. People with preexisting health conditions may have trouble getting help with those issues, as the pandemic absorbs caregivers’ full attention. And that can take a mental toll.

Hahm cites one of her students who is battling substance addiction and has had to switch to Alcoholics Anonymous meetings on Zoom. “She’s socially isolated,” Hahm says. “That has a tremendous impact on her ability and her psychology in being confident of getting help.”

3. Regardless of race, students juggling university expenses were financially stressed before COVID-19. The disease will pile on more worry.

Across the country, a number of college students hold part-time—and sometimes full-time—jobs to make ends meet, Hahm says, because “the cost of education is so expensive.” And for Americans who have already graduated from degree programs, student loans must be repaid. But with some borrowers coping with pandemic-induced layoffs and furloughs, temporary relief may be delayed. Hahm says young people on shaky financial ground may be “in constant anxiety and depression mode right now.”

With a prolonged economic slump possible, “they’re also worried about not being able to get an adequate job after they graduate.” Not to mention the fear they share with everyone else about getting seriously ill from the virus, she says.

4. Even if you’re white and well-off, your mental outlook probably is taking a hit from the isolation.

Regardless of race or socioeconomic status, students were universally plucked out of the inherently social stew of campus life: classes, clubs, sporting events, parties. Many white-collar workers have swapped the in-person camaraderie of offices for Zoom meetings from their dining room tables.

“Social distancing is creating a sense of loneliness and of not being able to accomplish things,” says Hahm. “A lot of internships are canceling. [Young people] cannot get summer jobs.” And, she says, many young Americans have been dreaming about summer jobs and how those work experiences would be really helpful for them to go to the next level of their careers.

Social distancing, she says, “is very difficult for these young people who need to be out there, who need to develop relationships, who want to get themselves known to the world.” And remember, Liu adds, that college campuses across America were already experiencing an “epidemic” of anxiety and depression long before the virus piled on more fears—with transgender students at a fourfold higher risk of suffering poor mental health.

5. Anxious people might get an uplift from this unsettling-to-others time.

“Some therapists have been saying, ‘My patients who were anxious seem to be doing OK, better than I thought,’” says Liu. “There’s been some thought as to why that might be, and one idea is that their experience of being anxious all the time is somewhat being validated, because everybody under the condition of the pandemic is feeling this sense of hypervigilance about going outside, about interacting with other people, about what their future might hold. These are the things that many people with, say, OCD or generalized anxiety, feel on a daily basis for much of their lifetime, and they’re saying, ‘Hey, other people are sort of getting it.’”

Editor’s note: In May 2020, after this story was published, the National Science Foundation awarded Hahm roughly $130,000 in support of this study.