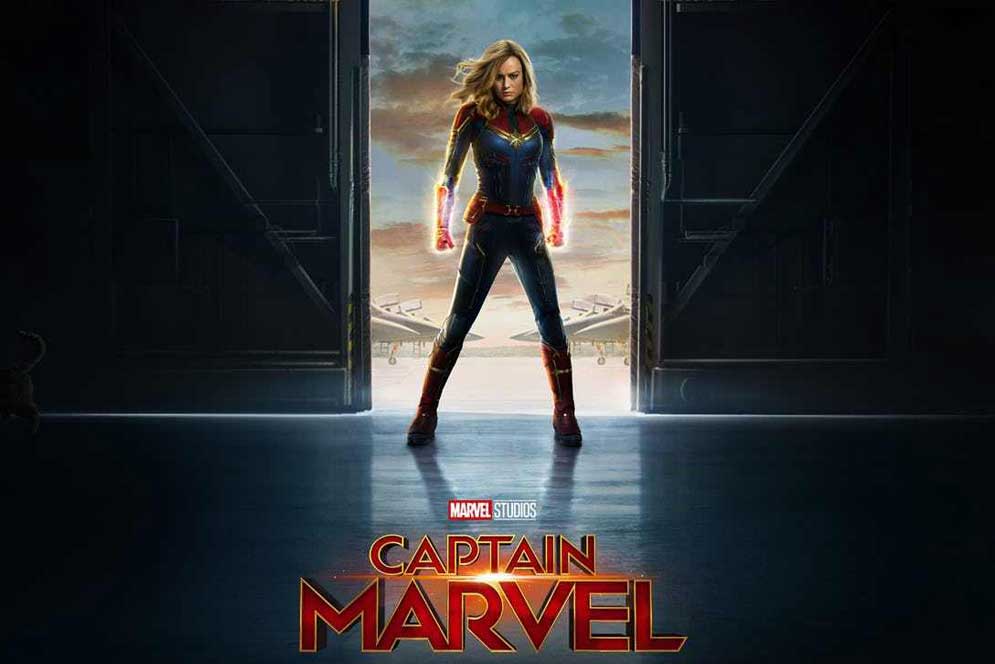 Captain Marvel, the first solo female superhero film in the Marvel Universe, stars Oscar winner Brie Larson as Carol Larson/Captain Marvel. It opens nationwide on Friday, March 8. Take a shot at our trivia contest and you could see it free tonight. Photo courtesy of Marvel Studios

The spring movie season arrives today with Captain Marvel, the 21st entry in the Marvel Cinematic Universe. Besides the fact that moviegoers have been looking forward with enthusiasm to the film, Captain Marvel is historic: it’s the first Marvel film to feature a solo female superhero. Oscar-winner Brie Larson stars as Carol Danvers/Captain Marvel. Produced by Marvel Studios and released by Disney, the movie is set in the mid 1990s and traces Danvers’ transformation into one of the universe’s most powerful heroes after Earth is caught in the middle of a galactic war between two alien worlds, the Krees and the Skrulls.

De-aged Samuel L. Jackson (Nick Fury) and Clark Gregg (Agent Coulson) return, and the special effects work making them look decades younger is something to behold (if they sold that in a cream form, I’d buy it). Jude Law appears as Yon-Rogg, a Captain Marvel archrival. Others in the cast: Ben Mendelsohn as the villain Talos, the shape-shifting leader of the Skrull invasion of Earth; Annette Bening as a Kree scientist; Gemma Chan (Crazy Rich Asians) as Minn-Erva, a Kree sniper; and Lashana Lynch as Maria Rambeau, a fellow colleague of Danvers’ and one of her closest friends.

Captain Marvel has already gotten positive feedback. Review aggregator Rotten Tomatoes gave it an 84 percent approval rating, and in a Variety review, critic Owen Gleiberman credits the film’s screenwriters for “crafting a tale with enough tricks and moods and sleight-of-hand layers to keep us honestly absorbed.”

The film is expected to rake in as much as $150 million at the domestic box office and as much as $350 million worldwide on opening weekend. (In contrast, 2017’s blockbuster hit Wonder Woman—the only other superhero film starring a female character to date—grossed $103.3 million in the United States opening weekend.) Larsen will return as Captain Marvel on April 26, when Avengers: Endgame (which picks up where Avengers: Infinity War left off) hits theaters.

BU Today helps celebrate the arrival of Hollywood’s spring movie season and the first Marvel film starring a female superhero our favorite way: a trivia contest. Here’s a chance to show just how deep your knowledge of the Marvel Universe is and maybe win two tickets to a screening tonight at AMC Loews Boston Common 19.

To enter, simply answer the questions below by 1 pm today, Friday, March 8. Each person answering all questions correctly will be entered in a drawing for two tickets to tonight’s 9 pm showing of Captain Marvel at AMC Loews Boston Common 19, 175 Tremont St., Boston.

We’ll notify the winner and announce the name on BU Today by 2 pm, so be sure to check back this afternoon.

Sorry. This form is no longer available.

Senior Alex Pena (COM) can be reached at alexgp97@bu.edu.