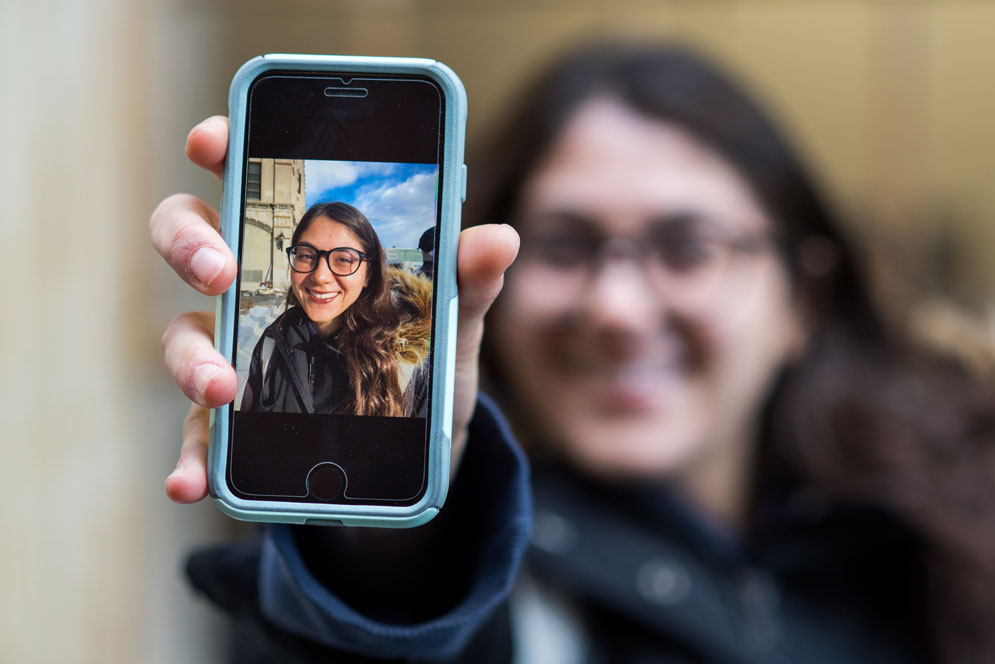 Senior Lexi Herosian (COM) tends to be conservative about posting photos and/or stories about herself on social media sites. Photo by Cydney Scott

A few days apart in late July 2017, two then–BU sophomores posted some personal content to their social media feeds. One of them blasted out a self-produced vlog about sex and partying to his tens of thousands of YouTube subscribers; the other shared a tame picture of herself at a peaceful pond that was visible only to her tight-knit circle of Instagram friends.

The ways Arlin Moore (COM) and Lexi Herosian (COM), now seniors, used their social media platforms that week is emblematic of the wildly different tacks students are taking in shaping their digital identities. The question that only time will answer is this: is one direction wiser than the other?

Moore’s video highlights antics like him attempting to pour vodka in his sleeping friend’s ear at 6 am.

It’s called “Story Time: My Craziest College Story (Sex and Drugs),” and it features Moore talking to his camera, recounting Marathon Monday debauchery and his encounter with a young woman he was eager to have sex with. YouTube subscribers have since viewed it more than 250,000 times.

That same week, Herosian posted a photo on Instagram to her several hundred close followers, showing herself and a friend in shorts smiling on the beach at Walden Pond.

Moore a film major, has made nearly 500 similar vlogs for his YouTube channel, which has 160,000 subscribers. There’s footage of him showing off his six-pack abs (he’s frequently shirtless), goofing around with friends, or pondering questions like, “Which twin would you rather hook up with?”—flanked by twins, of course. (Moore says he’s shed his 18-year-old outrageous party-guy image, vlogging instead about health and wellness in new videos, such as, “My Anxiety Story: Arlin’s Tips for Beating Social Anxiety, Depression, and Negative Thoughts.”)

Herosian’s Instagram feed offers an extreme contrast. It’s a smattering of beautiful images of beaches and plants, her grandmother, and more recently, a photo of her hugging a sequoia. There’s also a photo and music montage of Beatles songs that includes a picture of a favorite passage from the book Dreaming the Beatles by Rob Sheffield.

Scandalous it’s not. But even if you wanted to follow Herosian’s feed, you can’t, at least not without her permission. She keeps her account private. 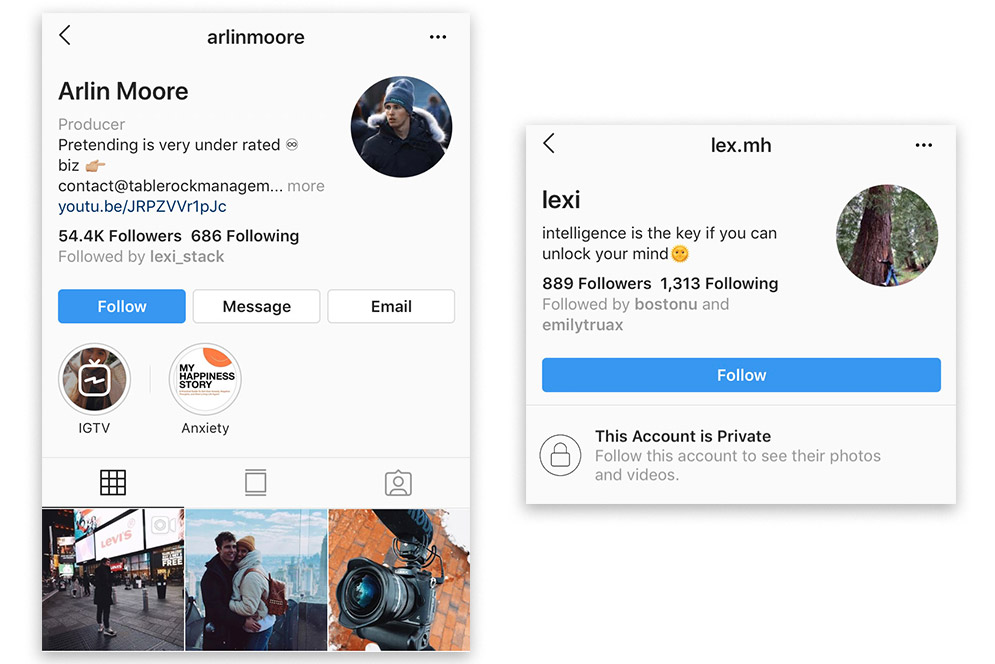 Moore has a public profile and anyone can see his posts. In contrast, Herosian keeps her Instagram account private so you cannot view her content unless she accepts you as a follower.

A pair of 22-year-olds, both seniors, both digitally savvy millennials, and both offering a glimpse into how college students create a digital identity. One takes the cautious approach, careful not to disclose too much personal information in her feed, worried that her identity could be hacked or how tech giants like Facebook might use her personal information in the future.

The other? Not worried about anything. He’s hyperconnected and lets it all hang out, breaking nearly every convention around what students shouldn’t post online.

Who’s right? Or is it possible that there is no right or wrong approach? While policymakers and legislators begin to consider privacy issues and limits on the social media industry, students are venturing forth, learning as they go and rewriting society’s norms almost daily.

A social media presence is now often a job prerequisite in many fields, and not having one can potentially hurt a student’s job prospects, says researcher Mina Tsay-Vogel, a College of Communication associate professor of communication, who studies the impact of social media. It can be a tricky path to navigate.

“Self-promotion has almost become part of looking for a job,” Tsay-Vogel, codirector of BU’s Communication Research Center, says of social media. “It all comes down to how you use it. One’s online personality is not completely separate from one’s off-line personality—or from off-line consequences.”

If you’re a student at BU, there’s a good chance you know about Moore’s vlogs. He’s been producing and sharing them since freshman year, turning them into a daily phenomenon called 8AM, and as their popularity grew, selling merchandise like sweatshirts and athletic slippers with the 8AM logo.

People watched in droves to hear Moore talk about dating and see him and his friends flip kegs at parties or mix disgusting smoothies while inebriated.

And breaking all the conventional wisdom—like warnings to not post photos of oneself drunk in a sea of red Solo cups, swearing, or scantily clad—helped win him that giant following. And not just on YouTube. He also has 55,000 followers on Instagram.

“I wouldn’t say nothing is off limits,” Moore says, noting that he wouldn’t vlog about, say, an issue at home. “I think it’ll be hilarious to show my kids exactly what I was doing when I was 18.”

With more and more eyeballs following him, he began earning real money by promoting products as an influencer, touting fitness gear and Brita water filters. Now he has an agent at Table Rock Management, a company that produces branded videos for companies like Dollar Shave Club, Adidas, and Adobe.

Moore says he has no regrets.

One of the few things that Moore will not discuss openly is how much he earns from his vlogging adventures, which have taken him to Australia, Morocco, and other far-flung places. It’s been a lucrative side hustle, one that he’ll pursue full-time following graduation.

Edward Boches, a COM professor of the practice, advertising, says Moore is part of an edgy culture of creatives in the United States on the cutting edge of how to use social media to its greatest advantage—and to theirs. They’re following the lead of people like Casey Neistat, a YouTube phenomenon who has amassed more than 11 million subscribers with his break-all-the-rules vlogging philosophy.

“If you know what you want to do and you want to develop more skills and create content, making a [YouTube channel] makes a lot of sense,” Boches says. “The risks? They’re not as bad as we tend to think they are.”

Yet a life caught on film, exposed to all, can have drawbacks. And Moore knows it. 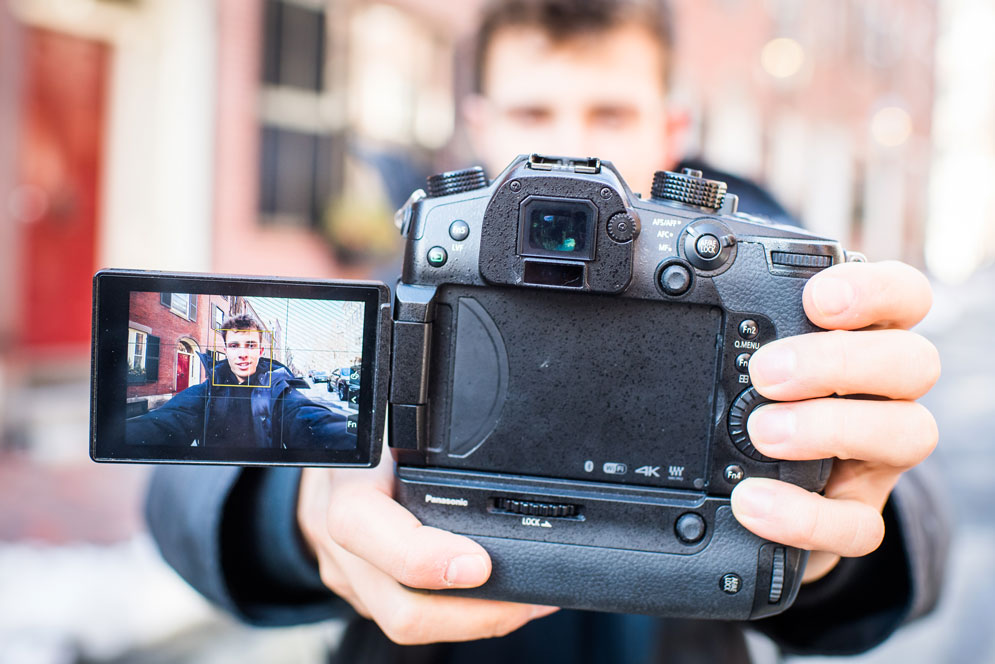 Vlogger senior Arlin Moore (COM) posin for a photo on March 11, 2019. He vlogs everything that is going on in his life and has 170,000 followers on YouTube. Photo by Jackie Ricciardi

Behind the happy, freewheeling image of himself partying on Marathon Monday in his early college years, he wasn’t quite so carefree. He says he felt anxiety from the pressure to gain and keep his followers and constantly offer new and exciting content.

Now, having launched a series of vlogs called “Arlin’s Advice,” he’s exposing that part of his life as well. He’s written a self-published book, My Happiness Story, available on his Instagram page, and an email newsletter offering his “success secrets,” including how he accumulated followers and achieved financial independence before he was 21.

Moore says he thinks the standard advice given to college students to be themselves online fails to recognize the potential social media offers. “I think that advice to be yourself is almost a myth,” he says of his move into personal growth coach. “You can choose who you want to be.”

It’s a dramatic turn, and there’s no telling if the new content will hold his audience’s attention, now or in the future. Tsay-Vogel says technology is changing so fast that predictions are difficult.

However, her research has found that heavy users of social media (Facebook in particular) tend to have relaxed attitudes about privacy as well as more support for a governmental role in privacy protections. Many heavy users confront issues with anxiety and #FOMO (fear of missing out), she says, and some experts believe social media overexposure is a major cause of higher rates of depression among millennials.

“I do think you need to be careful on social media,” she says. “It’s hard to know what information is regrettable 10 years down the line or what the ramifications are.”

That shift might already be happening. Some new research shows that millennials are curtailing or quitting social media entirely, part of a backlash against the relentless pressure to see and be seen online. Research by the advertising firm Hill Holliday has found that 34 percent of Generation Z, a group born in 1994 or later, have quit one or more social media platforms, and 64 percent have taken a break. They’ve even hashtagged their movement around joy: #JOMO (joy of missing out).

Enter public relations major Lexi Herosian, whose social media feed is notable for what it is not.

Of all Instagram users around the globe between the ages of 18 and 24, 60 percent log in daily; Herosian’s use is far less frequent, and she posts only about twice a month.

Mostly, she uses Instagram to keep in touch with friends and family, catch up on news, or share photos from a trip, she says. News about her spring break exploits? It included two photos, one of her plane ticket to California for a road trip, the other of her sitting on the rocks at Pebble Beach in a sweatshirt and baseball hat.

“My approach to Instagram is usually more conservative, but creative,” Herosian says. “I like posting more colorful images of my outdoor adventures or photos of my favorite musical artists. I also use social media to raise awareness of certain causes, like climate change and gender equality.”

She recently deleted a post—a photo of the books she was reading. “I deleted it after my sister made fun of me for one of the books,” she says. “I’m just a cautious person.”

Herosian says she’s heard that employers view students’ social media feeds during the interview process. Some employers use facial recognition software to help them in their vetting process.

But she says the main reason she limits her social media feeds is because she has concerns about how her personal information could be used in the future by media giants. Seemingly ephemeral posts on Snapchat or Instagram that are designed to disappear from view may live on somewhere under the control of Facebook (which owns Instagram) or Google (which owns YouTube).

“I worry a good amount about my data being used by companies like Google and Facebook,” she says. “That’s why I’m fairly private about what I post.”

Are there drawbacks to not using social media frequently?

Not for Herosian, who has already fielded a job offer. Most people she knows keep their Instagram settings on private, requiring permission to join.

“And I think about what I post before I post it. That way I don’t have many concerns,” she says.

Moore says he also has a self-created privacy setting on his vlogs, though hardly foolproof. He issues a warning preceding some content: “Mom, stop watching.”

There are 2 comments on Brazen or Cautious? Two Seniors, Two Approaches to Social Media