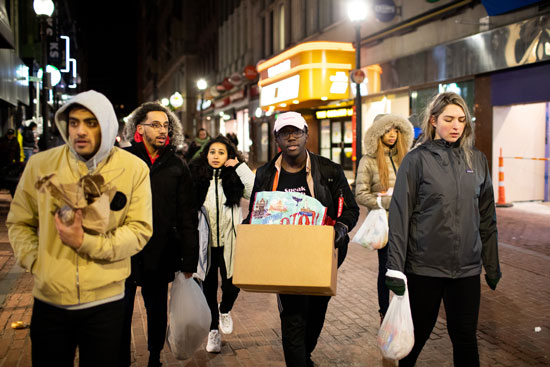 Swipes for Boston, a BU Student Government initiative, delivers donated food and Rhetty-to-Go meals to homeless people around the city.

On a recent Friday evening, 10 BU students were gathered on the steps of the recently closed City Convenience in Kenmore Square, surrounded by cardboard boxes and plastic bags containing peanut butter and jelly sandwiches, snacks, fruit, and more in brown bags. The sun had just set, and despite the quickly dropping temperatures and frigid wind chill, the students were anxious to head out into the city.

This was the first food run of the spring semester for the student-run organization Swipes for Boston, an extension of BU Student Government, run through its City Affairs Department. This dogged group of students comes together once a month to hand-deliver food, water, and other supplies to Boston’s homeless living on the streets.

Junior Anthony Dongfack (CAS), who started Swipes for Boston as a freshman two years ago, was inspired by a similar program his friend AaronRey Ebreo founded at Temple University in Philadelphia. Dongfack led the charge across Kenmore Square.

The idea behind the program is simple: students on one of the University’s dining plans donate unused meals to people in need. Most meals are charged by swiping at a dining hall, but Dining Services also offers brown bag meals that students can order to go when they don’t have time to stay and eat. Swipes for Boston encourages students to use their spare meal swipes to order these to-go bags and donate them to the group for distribution each month to Boston’s homeless community.

“I used to really dislike the way I would feel when I walked down the streets of any city past a homeless man, homeless woman—even a homeless teenager, someone that’s my age—and I didn’t have anything or any way to help them,” Dongfack says.

When he first came up with the Swipes for Boston idea, Dongfack applied for, and received, support from the Santander Urban Impact Microgrant Program through the BU Community Service Center. With $3,000 in initial seed money, he bought water bottles and meal supplies and handed them out on monthly food runs around Boston with a small group of close friends. The endeavor has grown since then, and this past fall, Student Government started supporting the group as one of its initiatives, funding things like the T-shirts members wear during food runs and helping increase awareness for the Swipes for Boston mission via social media platforms. All meals are donated by students.

Senior Sarah Paco (CAS), Student Government’s director of city affairs, works closely with the group and sees it as “a bridge between the Boston community and the Boston University community.”

Paco learned about Swipes for Boston from junior Hafzat Akanni (CAS), Student Government vice president, last summer. After talking with Dongfack about the program and its goals, Paco immediately wanted to help support the mission.

“I just want students to become more aware of the mission,” she says. “I think that it’s really easy to forget what’s going on around us. There are so many people who don’t have as much as we have. I think we’re in a position of privilege being college students, and I think it’s important to give back.”

Swipes for Boston’s current food run winds its way through Kenmore Square, down Commonwealth Avenue and Massachusetts Avenue to the Berklee School of Music, then down Boylston Street past the Boston Common and up Tremont Street. Whenever they see someone who appears to be homeless, volunteers approach that person and offer a Rhetty-to-Go meal, fruit, sandwiches, and snacks.

Sometimes, the men and women they meet simply want to talk. On last month’s run, the students met two homeless men huddled in blankets in front of a building on the corner of Arlington and Boylston Streets. After offering them some food, one of the men started telling them about emigrating from Brazil to Boston. When he started to cry, Dongfack knelt down and held his hand for a few moments.

“Nowadays, when I’m not doing this, I at least say hello,” Dongfack says. “I try to at least acknowledge that everyone’s a fellow human. A lot of people look at them like, ah, I can’t help them so I’m just going to ignore them. Doesn’t make sense. They’re a person, just like you. You could easily be in the same situation if certain experiences in life hit you hard enough. They deserve our respect.”

By the end of the run, they had handed out 49 meals, 40 pieces of fruit, 20 water bottles, and “a bunch of snacks” to approximately two dozen homeless people. When there’s food left over after a run, they bring it to St. Francis House on Boylston Street, New England’s largest day shelter.

“We understand that students have arduous schedules,” Dongfack says, “so really any type of support that can be offered is more than welcome.” Volunteers are welcome to show up for just half a run, he says, and the more students donate food, the more people they can reach.

To donate a meal, go to the Dining Services website and order a Rhetty-to-Go breakfast meal with cereal and a water bottle. (Note: you must place an order by 6 pm Thursday if you want to contribute a meal for Friday’s run.) Then drop off the meal at the Student Government office in the George Sherman Union basement or email swipesforboston@gmail.com to arrange a time for it to be picked up. Paco says her office and Swipes for Boston are working on setting up more drop-off locations around campus, so keep an eye on the Student Government social media pages for updates.

To participate in the run, meet at 6 pm in front of the old Kenmore City Convenience, 543 Commonwealth Ave., on the northeast corner of Deerfield and Commonwealth.