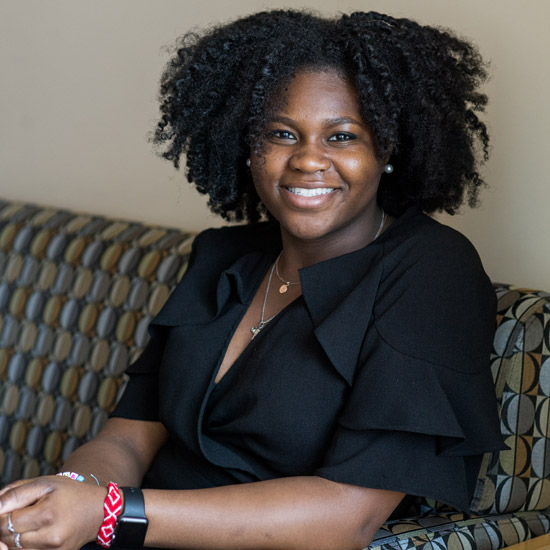 Junior Hafzat Akanni (CAS), the second African American woman to be Student Government president at BU, led a slate that won a landslide victory this spring. Photo by Cydney Scott

EDITOR’S NOTE: This story has been corrected to reflect that Hafzat Akanni was the second African American woman president of Student Government, not the first.

The second African American woman to serve as president of Student Government: Hafzat Akanni’s political résumé starts with that distinction. (Tracie Leonard (CAS’98) was the first black woman in the role.) But there’s more: she and Empower BU, the slate she led in April’s Student Government Executive Board election, won by a landslide (1,396-628).

And that puts wind at their backs in pursuing unfinished parts of the ambitious agenda Akanni supported as executive vice president of last year’s Student Government. Indeed, voter turnout eclipsed last year’s, which itself was two-thirds again the ballots cast in 2017.

“I thought it was really beautiful to walk into a room of students and not know anyone” during this year’s campaign, she says. “We did the same thing we did last year: grassroots campaigning, meeting with every student group that would allow us the opportunity to sit with them.” (Before serving in Student Government, her own awareness of campus governance had been confined largely to her friendship with its president.)

The Executive Board that governed during the last year “has increased Student Government’s presence across social media. I see their posts across Twitter and Facebook pretty often,” says sophomore Shaun Robinson (COM), editor in chief of the Daily Free Press, the University’s independent student-run paper.

As for concrete achievements, Robinson and Harvin cite the esprit-building exercise of resurrecting a spring concert, which Student Government organized after a five-year hiatus. Tickets sold out within 12 minutes of becoming available, says Harvin.

More enduring is the beginning of free menstrual products in campus bathrooms, a student Senate initiative that came to fruition under the Executive Board, Robinson says. Packages of maxi-pads and tampons shared space recently in the Student Government office with more typical accoutrements.

Nigerian-born and reared in Ireland until her family moved to the United States six years ago, Akanni had a disappointing political baptism in high school, when she lost a race for student body president. That made her nervous as this year’s ballots were counted, she confesses, even though she was running on the notable progress last year’s Student Government had made on its agenda, which also included:

As Akanni looks ahead to life post-BU, the ever-striving president-elect hopes that she and her fellow Student Government members can accomplish even more next year: “I can’t wait to come back for Alumni Weekend,” she says, “and see the voter turnout be 6,000 people…however many Alumni Weekends it takes for me to come back to see that happen.”

There is 1 comment on For Student Government’s Second Black Woman President, Reform Continues