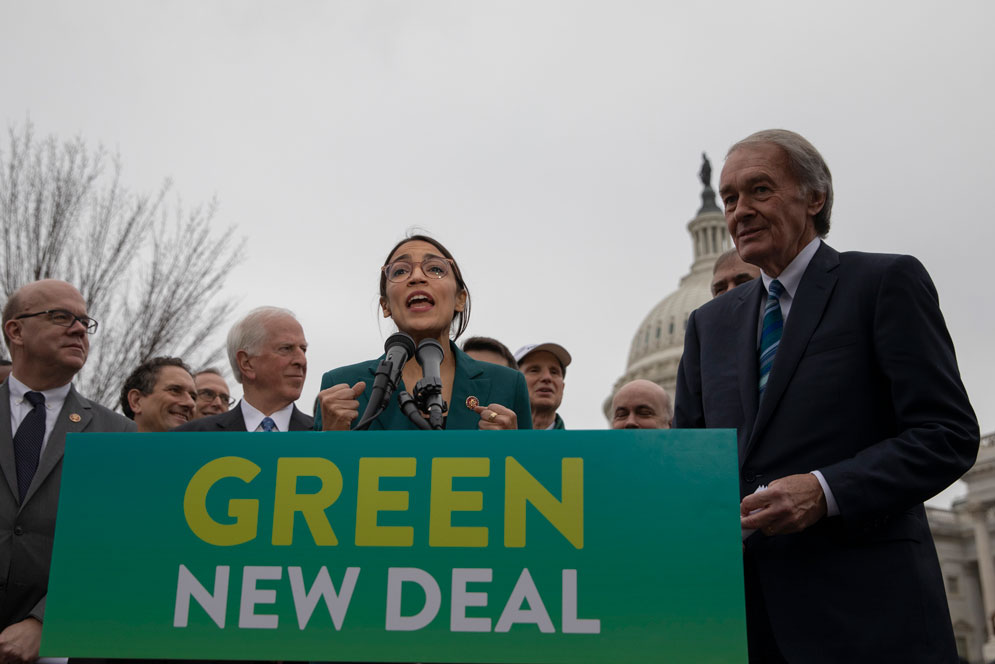 It’s not a stretch to say the Green New Deal (GND), unveiled with great fanfare, and to plenty of skepticism, as a congressional resolution earlier this month, has BU in its DNA.

The moonshot call for net-zero greenhouse gas emissions within 10 years is cosponsored by Congresswoman Alexandria Ocasio-Cortez (CAS’11) (D-N.Y.). Her alma mater is steeped in climate concern, confirmed by its own Climate Action Plan.

Ocasio-Cortez’s handiwork, cosponsored by Senator Edward Markey (D-Mass.), has experts saying that some planks aren’t doable in a decade—and that other parts might never be realistic. But it’s getting plaudits from one group here—BU student environmentalists.

“The Green New Deal is the policy that my generation and all of those to come after need right now to ensure a livable future,” says sophomore Owen Woodcock (CAS), a coordinator with the Sunrise Movement, a young people’s environmentalist group that has worked with Ocasio-Cortez on her resolution.

“It is the only plan at the national level of government that addresses the climate crisis at the time and scale that science and justice require,” says Woodcock, who is also secretary and interior minister for DivestBU, the campus campaign urging the University to cease fossil fuel investments.

“Time and scale” explain both the enthusiasm of supporters and reservations of others about the GND, which calls on the United States to “ramp up renewable manufacturing and power production, retrofit every building in America, build the smart grid, overhaul transportation and agriculture, plant lots of trees, and restore our ecosystem to get to net-zero” emissions, according to a fact sheet released by Ocasio-Cortez.

The plan promises millions of new jobs resulting from these efforts, but it also goes beyond environmental matters to endorse progressives’ dream initiatives, including a federal jobs guarantee for Americans and for workers’ right to unionize, as well as “high-quality health care, housing, economic security, and clean air, clean water, healthy food, and nature to all.”

“A 10-year window to eliminate all [greenhouse gas] emissions is unrealistic,” says Cutler Cleveland, a College of Arts & Sciences professor of earth and environment. “The technologies to achieve this already exist to a large extent: electricity from wind and solar, electric vehicles, and net-zero vehicles. But the transformation of the electric grid, the wholesale elimination of the internal combustion engine, and the retrofit of the nation’s building stock is more than a 10-year project.”

Among other shortcomings, Cleveland says, is ambiguity about what qualifies as “green” energy. Massachusetts state standards say nuclear power is green—the GND doesn’t mention that option, and Ocasio-Cortez’s fact sheet (since amended for errors) calls for eliminating nuclear plants. Also, the plan is ambiguous about carbon-capturing technologies, he says, and suggests a “politically and economically unwise” emphasis on federal financing, without private sector partnerships.

Even with these reservations, Cleveland applauds the GND’s call for net-zero carbon emissions, saying it aligns with a United Nations target of 2050 for that goal and is “built on a solid foundation: the transition to clean electricity and fuels, coupled with a dramatic improvement in the efficiency of every end use of energy.”

The GND was intended as a resolution to begin a conversation, not as formal legislation; an Ocasio-Cortez aide says its planks would become individual bills for Congress to consider. That means “we will need to see a lot more political agreement before anything changes,” says senior Grace Li (COM, CAS), environmental affairs director for BU Student Government.

But nothing is that simple in politics these days. Just days after the GND was unveiled, Senate Majority Leader Mitch McConnell (R-Ky.) promised a quick vote on the plan—likely as a cudgel to wield against supporting Democrats, political observers suggest.

Li says she’s “not confident that we currently have enough political agreement” on achieving all of the goals in a decade. “I’d like to see a better explanation of how these goals will be accomplished.”

Still, she says, “what makes the Green New Deal so exciting is that it factors in the concept of environmental justice. Oftentimes, those at the margins of society are those who are most affected by the symptoms of environmental issues, like pollution, land and water mismanagement, and climate change.…Moving to a carbon-neutral society will in part reduce inequality that is perpetuated by environmental factors.”

Student supporters believe the social justice planks have bearing on the environment. “Indigenous voices are so often marginalized, and quite frankly, we have a lot to learn from indigenous cultures about how to respect each other and the Earth,” says senior Masha Vernik (CAS), another DivestBU leader.

Woodcock considers the jobs guarantee essential to create the massive workforce that will be needed to build or retrofit a carbon-neutral economy, making the GND “a realistic option,” he says.

Vernik, who can cite the Green New Deal resolution by section—e.g., sustainable agriculture in Section G, indigenous people’s land rights in Section M—says that the whole cannot stand without all of its parts: “Decarbonizing the economy, guaranteeing jobs, and prioritizing frontline communities are the core tenets…and any final legislation without them cannot bear the name of the Green New Deal.”